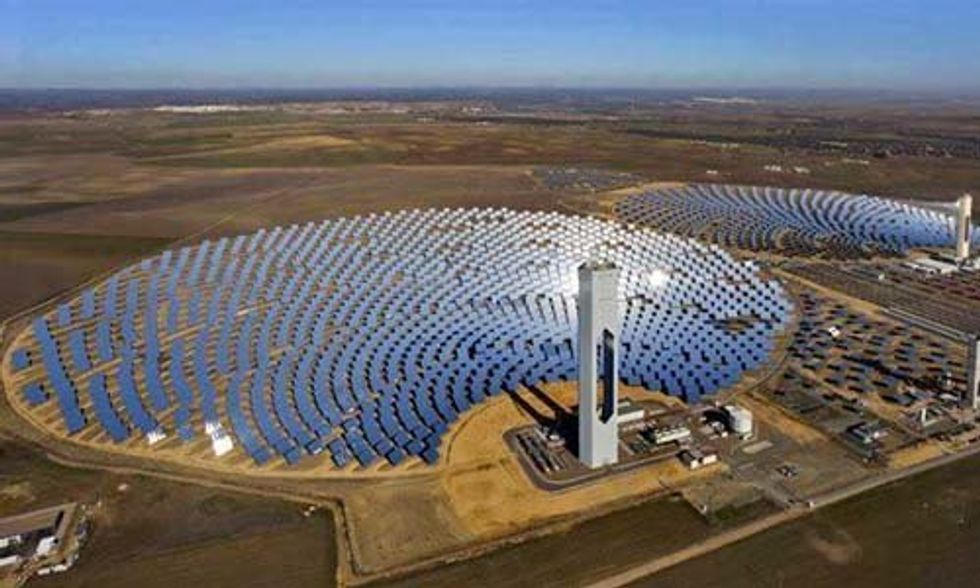 When complete in 2017, the solar farm could have 5.2 million photovoltaic cells, producing as much as 1,000 MW of electricity. Photo credit: Quaid-e-Azam Solar Power Park

The Quaid-e-Azam Solar Power Park is a $130 million project on nearly 500 acres of land in the Cholistan desert in Punjab. And it's just the first part of a larger project, the $46 billion China-Pakistan Economic Corridor. When the entire project is complete in 2017, the site could have 5.2 million photovoltaic cells, "producing as much as 1,000 MW of electricity—equivalent to an average sized coal-fired power station—and enough to power about 320,000 households," says China Dialogue.

The area's 13 hours of daily sunlight and its flat expanse of desert make it ideal for a solar farm. "The solar park will also shrink Pakistan’s carbon footprint," Najam Ahmed Shah, the chief executive of the solar park, told China Dialogue, "displacing about 57,500 tonnes of coal burn and reducing emissions by 90,750 tonnes every year."

However, there have been criticisms of the project. This solar farm uses a significant amount of water. "An estimated one liter of water is used to clean each panel. Water consumed to clean the eventual 5.2 million panels built will be colossal for a country that is fast becoming water stressed," says China Dialogue. "Currently, 30 people take 10 to 15 days to clean the entire 400,000 cells." Additionally, the massive project has drastically increased activity in the area and required lots of new infrastructure, which will disturb a once-pristine desert environment, home to a rich diversity of wildlife.

Pakistan is far from the only country experiencing a huge growth in solar projects. The U.S. Navy signed on for the largest purchase of renewable energy ever made by a U.S. federal government agency. Hawaii is piloting a solar-powered hydrogen fuel cell generator for one of its ports. And California is in the process of building one of the world's largest solar farms.