Why Barbados Is Beating the U.S. on Road to Renewables 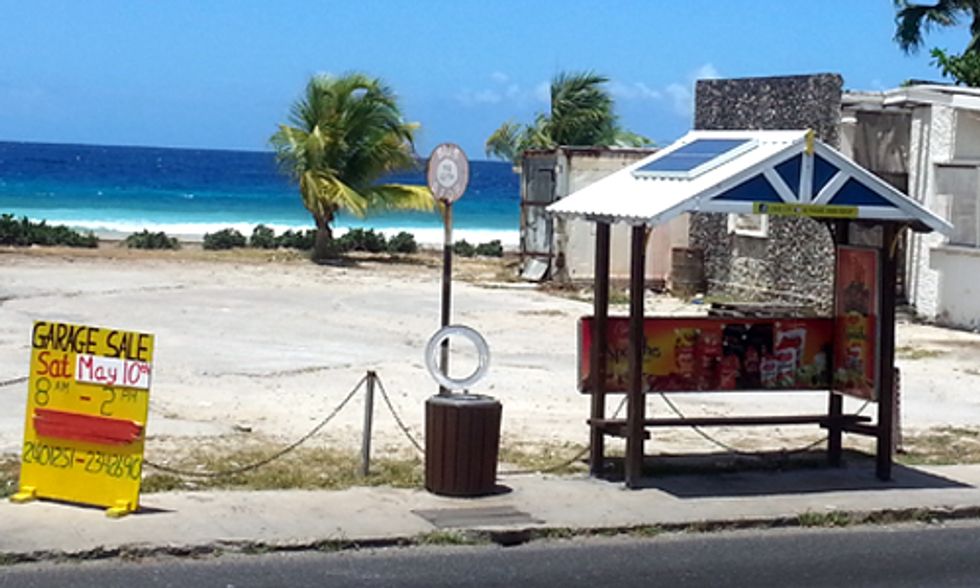 Oil prices are soaring again—this time due to uncertainty over the fate of major producers like Russia and Iraq. Expect to pay more at the gas pump and the grocery store in the months ahead, since everything from transportation to manufacturing to our petroleum-intensive agricultural system is a puppet flailing upon the strings of this volatile commodity.

A solar bus stop in Barbados.

Haven’t we been through this drill before? A crisis—usually in the Middle East—causes oil prices to rise. Inflation increases and economic growth shrinks. At which point, we hear renewed calls for energy independence.

This is the message that I was hearing when I visited Barbados last month. I was surprised to see solar panels and water heaters sprouting from government buildings, hospitals, police stations, bus shelters as well as thousands of gaily colored private homes throughout the Caribbean island. I should not have been surprised. Conventional electricity prices in the Caribbean are more than four times what we pay in the U.S., due in part to high shipping costs for the Venezuelan crude that fuels the region’s power plants.

For Barbadian’s, the cost savings from solar are becoming too obvious to miss. A thermal water heater, which retails for $2,300. U.S., pays for itself in lower electricity bills in less than two years.

It is not just consumers who are noticing what a great deal solar energy is becoming. Industries like the island’s only desalinization plant are installing large photovoltaic arrays to help defray their own electricity costs. Solar advocate and advisor to the Barbados government William Hinds told me that there are already enough private investors who want to produce solar in Barbados, that the country would shift to 100 percent solar in less than ten years, even without government subsidies, if the free market were left to its own devices.

The free market, however, is rarely left to its own devices. Even in Barbados, industries are restricted in the amount of solar energy that they can produce, due to admittedly legitimate concerns about the stability of the power grid. There are real technical challenges in integrating intermittent power sources like wind and solar into the grid, while still maintaining the stability of the system that need to be worked out.

In an address marking the United Nations Environment Program’s (UNEP) World Environment Day in Bridgetown’s Independence Square in June, Barbados Prime Minister Freundel Stuart pledged that the island nation would produce 29 percent of its energy from renewables by the end of the next decade.

That goal won’t be hard to reach. Not only is the island blessed by abundant sunshine, but it has year-round trade winds to run wind turbines. The Barbados government is also looking into harnessing the energy of the tides, as well as introducing ocean thermal energy conversion (OTEC), a technology which employs the temperature difference between cooler deep and warmer shallow sea waters to generate electricity. The Barbados government commissioned a Green Economy Scoping Study, prepared in partnership with UNEP and released last month in Bridgetown, which includes recommendations on how to make the island’s agriculture, fisheries, transportation and energy systems more sustainable.

For Barbadian’s, the cost savings from solar are becoming too obvious to miss.

Barbados is going relatively slowly on its path toward a green economy in order to play it safe. But the U.S. is going even slower. The challenges of integrating wind and solar energy into the grid are often cited by the utility and fossil fuel industries in the U.S. as reasons not to develop fully our renewable energy potential. Are we to believe that a country which sent a man to the moon and created the internet can’t figure out how to integrate alternative power sources into the power grid?

Germany has already done so; Italy, Belgium, the Czech Republic and other European nations are all well on their way toward doing so. Even tiny Barbados is ahead of us on the road toward green energy independence.
Granted it will be difficult and expensive to overhaul our power system. But it won’t take long before our initial investment begins to pay off in lower electric bills and a cleaner environment. And revving up the new green economy will create a more jobs than it will eliminate, as is already happening on Barbados, which is now the fourth largest solar water heater manufacturers in the world.
One might object that it is relatively easy to go green on a small island blessed with an excess of alternative energy resources like the sun, wind and tides. But in certain respects it is actually harder there than it would be here in the U.S. The heavily indebted islands of the Caribbean often lack both the technological resources and the funding to transform their power infrastructures. And given the relatively small scale of their electrical demand, many private companies are unwilling to invest in this.
The U.S., on the other hand, has got the cash, the technology and the know-how readily at hand. And make no mistake, there are places in our own Southwest that get more days a year of sunlight than the Caribbean. And wind swept Midwestern states like Nebraska and Kansas will give the island’s steady trade winds a run for their money.
Moreover, the cost of alternative energy are spiraling down quickly. Up to 49 percent of the new electrical generating capacity in the U.S. came from renewables in 2012, and that figure is only going to rise as the price for solar and wind technology continues to plunge.
Critics counter that the price for renewables, while falling, is still above what we spend for conventional power. This may be true in the U.S. at the moment. The natural gas boom continues to keep our energy prices low. Artificially low.
The fact is, we do not pay the real price for the power that we use, including the cost of the carbon pollution and other forms of environmental degradation that fossil fuel mining and use generates. Global warming is going to have one hell of a sticker-price when temperatures rise more than 2 degrees centigrade (3.6 degrees Fahrenheit above pre-industrial levels), as the latest Intergovernmental Panel on Climate Change report predicts will happen by mid-century if we continue on our current trajectory.
But even aside from these escalating environmental costs, the federal government is subsidizing the fossil fuel industry to the tune of a half a trillion dollars a year in tax breaks, according to the International Monetary Fund, making the U.S. the largest benefactor of fossil fuel industry in the world. Renewable energy also gets government support to be sure; however, worldwide, fossil fuel subsidies were at least six times larger.
This makes no sense. We should be supporting the technologies that help us to put the brake on destructive climate change, rather than fanning the flames of the unsustainable fossil-fuel habit that is driving it.

The bottom line is that alternative energies already cost a lot less (when their hidden costs are factored in) than conventionally produced power. That this reality is not yet reflected in the real world price for energy is the fault of a political system which favors a dirty and dangerous technology of the past over the clean energy future which is already here. And here to stay.