What Are Solar Panels Made Of, and How Are They Made? 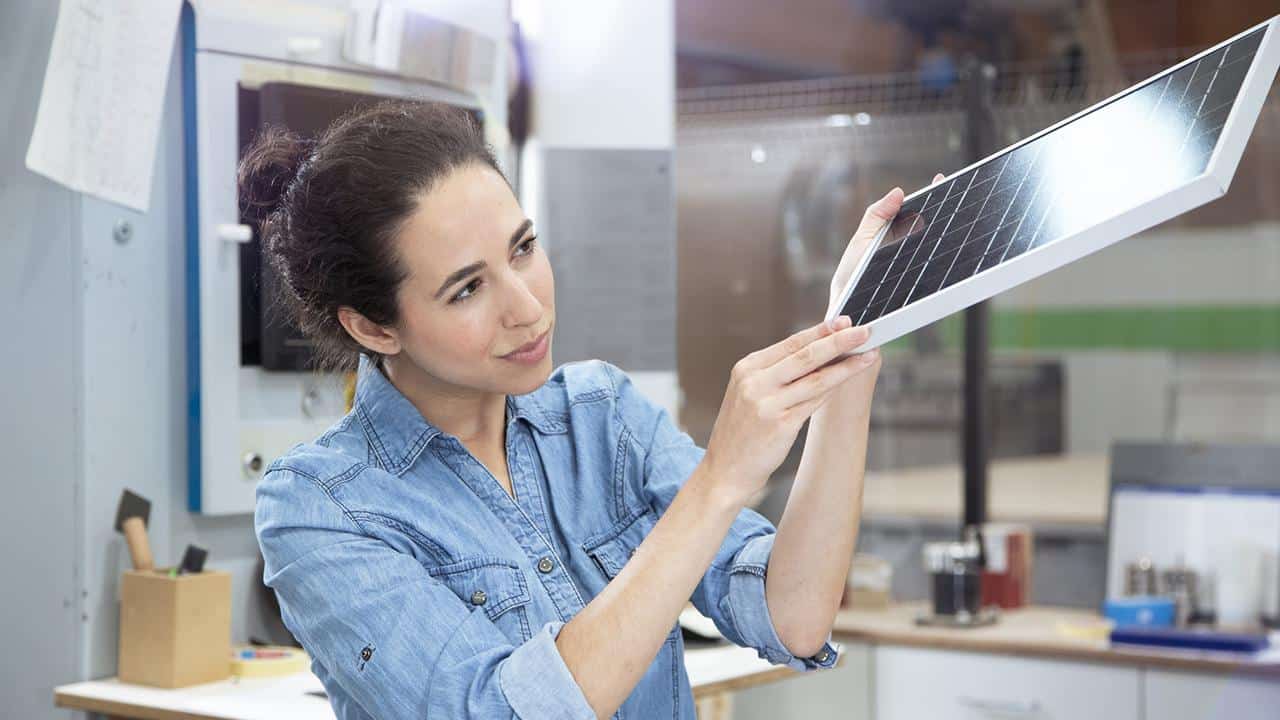 As solar energy becomes increasingly popular for residential use, you’ve probably had a few neighbors install solar panels and may even be thinking of getting a system for your own home. But before adopting this technology, you may be wondering: What are solar panels made of, and how are they made?

Many people simply accept that solar panels work and that’s all we need to know about them, but for the scientifically and technologically curious, each individual solar panel contains a world of interesting components and materials. Keep reading to learn more about what actually makes up a solar panel.

What Are Solar Panels Made Of?

When you come across a solar panel, it may simply look like a single comprehensive block, but the truth is that solar panels are made of a bevy of chemical components and materials, each crucial to the effective and efficient conversion of solar light into usable electricity.

To start, virtually all solar photovoltaic (PV) panels use crystalline silicon wafers as the main component material. Silicon is used to create semiconductors for about 95% of all solar panels on the market today, with the other 5% using experimental and in-development technologies like organic photovoltaic cells.

The semiconductors created for solar panels are what create electricity: upon interaction with sunlight, the electrons in this material get knocked loose, which is the basis of electricity. This process is called the photovoltaic effect and it’s how solar panels work to generate power.

Of course, the solar PV cells won’t be able to power your home without the rest of the operational components, including glass, plastic, metal and wiring. Solar panels are typically covered by a layer of glass and an anti-reflective coating to protect the sensitive silicon solar cells while still letting the light through. The whole arrangement is supported by a plastic/polymer frame for installation on a rooftop or in a ground-mounted solar system.

Why Are Solar Panels Made With Silicone?

With silicone being the predominant material used to create solar panels, the natural question to ask is: why? Silicone has been used as the semiconductor material of a solar PV panel for the majority of the solar industry’s history.

When investigating all possible materials on the periodic table, developers of early and modern solar panels all found that silicone actually boasted a number of ideal properties that made it the perfect candidate as this semiconductor material:

How Are Solar Panels Made?

Because of how many solar panels are needed to keep up with the growing global demand for new solar installations, the manufacturing process has become quite streamlined and standardized.

Solar manufacturers start by creating the silicon cells, a process that involves melting the silicone material down and mixing it with supportive elements. They then create sheets of material that can be cut and turned into the component cells. This part of the process typically entails mass production and laser cutting to expedite manufacturing. The finished cells are then protected with a layer of material such as glass or plastic.

Once the solar cells are created, they need to be connected together in the right size, shape and configuration. To do this, manufacturers solder them to the base of a solar panel, which is made of a conductive metal. The base houses the cells and also transfers the electricity they’re generating to a single location, whether it’s being sent into a building, into a local power grid or elsewhere.

At that point, all that’s left is to connect the solar module to an outer polymer frame, which holds the panel and insulates the electrical components, covering everything with a protective layer of glass. Finally, manufacturers box the panels and send them out to installers.

While solar power is often held up as a beacon of clean energy in a world rapidly succumbing to climate change, detractors will point out that solar panel manufacturing has its own environmental considerations.

As solar panel technology has improved over the last several decades, the manufacturing process has continued to become less polluting, as shown in an academic study that found “strong downward trends of environmental impact” from solar panel production between 1975 and 2015.

That rate of improvement hasn’t stalled in recent years, and identifying the most environmentally friendly materials and production processes remains a top priority of all major solar producers. Even further, end-of-life considerations for solar panels are being actively incorporated into the solar panel lifecycle, with manufacturers developing ways to recycle panels and their material components to further minimize their impact.

With that said, there is no such thing as a free lunch. The manufacturing of any product requires energy and resources, meaning the process inherently adds carbon dioxide to the atmosphere — exactly what that renewable energy is seeking to minimize.

While it’s true that solar panels have an environmental cost to their production, so too do the construction of power plants and wind turbines; the extraction and burning of fossil fuels; and any other method to create useful energy. But with solar panels having a lifetime of 25 years or more, that environmental impact is spread over a long period, while the actual electricity production requires zero fuel.

On a per-kilowatt-hour basis over the course of a solar panel’s lifetime, the net impact is much lower than almost any other energy source, and that impact is getting even smaller with the continued improvement to technologies, supply chains and recycling programs.

Is Solar Energy Right for You?

As power companies seek to address climate change and eco-conscious energy consumers recognize the benefits of generating their own electricity, solar energy is becoming a much more common source of electricity.

After being merely a blip on the radar as recently as 2010, U.S. solar energy capacity has grown by 50 times in the past decade to reach nearly 76 gigawatts, generating enough energy to power 19 million average households.

Most people have observed this trend toward clean energy, seeing neighbors buy solar panels, coming across solar installations on top of a local business or even driving by a full-sized solar farm. But is solar a good choice for your home?

For many homeowners, the decision comes down to cost. You can get a free, no-obligation estimate from a top solar company in your area by filling out the 30-second form below.

Frequently Asked Questions: What Are Solar Panels Made Of?

What products are solar panels made of?

Solar panels are composed of numerous solar cells, a set of wiring to connect those solar cells to a conductive material base, a glass or plastic protective casing for both individual cells and the whole panel, and a frame used to house all of these components. The material components typically include silicone or another semiconductor material, metal, plastic or glass, and wiring apparatuses.

Is living near a solar farm dangerous?

Solar farms do not produce any emissions, noise, pollution or other outward hazards. They also won’t impact the level of sunlight experienced by those living near them. The hazardous materials sometimes discussed regarding solar panels are safely contained within the panels themselves and are only a concern when determining how to dispose of or recycle those panels, so they pose no danger to those living nearby.

What toxic materials are in solar panels?

Some of the metal and chemical materials in a solar panel can be toxic and hazardous if exposed to people, including panels that may have cadmium telluride, arsenic, hexavalent chromium coatings, copper or selenium. In typical operation, though, these materials are securely contained and don’t pose any direct risk.

What is the back of a solar panel made of?

The back of a solar panel, known as the backsheet, is made of a polymer or plastic combination. It provides insulation from the electrical components of the panel.