Here’s what we’ll cover in this solar PPA guide:

We work with a panel of solar experts to create unbiased reviews that empower you to make the right choice for your home. No other solar site has covered renewable energy as long as EcoWatch, which means we have more data and insider information than other sites.

If you’re a homeowner looking to install solar panels, you’ve probably heard of the many financing options available, including paying cash, taking out a loan, solar panel leasing and power purchase agreements (PPAs). In this article, we’ll dive into solar PPAs and help you decide whether this is the best option for you.

Ready to make the switch to solar energy right away? EcoWatch has vetted the most reputable solar companies in America and can often secure better rates for our readers. Click one of the links below to be connected with a solar installer.

What Is a Solar Power Purchase Agreement (PPA)?

While loans and leases are pretty common with big purchases like cars, you may not know much about a third common solar financing option — power purchase agreements, or PPAs. A solar PPA is one way to lease solar panels.  Instead of paying to lease the solar equipment, though, you’re essentially borrowing the equipment and then paying for the electricity it produces each month.

A solar PPA is a popular financing option because it allows the homeowner to use solar energy without paying the hefty up-front cost of going solar. But don’t be fooled by a “free solar panel” gimmick — solar PPAs aren’t free, and they have their disadvantages.

In this article, we’ll dive into the pros and cons of solar PPAs. But first, let’s review some logistics.

How Do Solar PPAs Work?

When a homeowner signs a solar power purchase agreement, they’re signing a contract with a solar company or a third-party owner who will take care of all the steps involved in putting the solar photovoltaic (PV) system on the home. That includes design, installation and necessary permitting.

In return, the homeowner — also called the host customer — pays the solar panel owner for the energy produced by the solar panel system installed on their house. The energy is typically sold at a fixed rate that’s lower than the local utility’s electricity rate.

Below is a diagram showing how it works between the utility, the homeowner/host, and the PV system owner/developer.

If your solar panels produce more energy than your home needs at any given time, the extra kilowatt-hours (kWhs) will be sent to the utility grid if net metering is available. You’ll receive energy credits for those kilowatt-hours that can offset (or potentially eliminate) any electricity charges you have (for example for electricity from the utility used at night when your solar panels aren’t producing energy).

Even if you eliminate your monthly utility bill by going solar, remember you’ll still have a separate monthly electricity bill from the owner of the solar energy system. You’ll send a monthly payment off to the solar panel owner for each kilowatt-hour of solar energy you used.

If your home uses more energy than your solar panels produce, then you’ll have two bills — one from your utility company and the other from the owner of your PPA.

A solar PPA term typically ranges from five to 25 years. At the end of the term, you’ll have the option to renew the agreement, have the solar system removed or purchase your solar panel system from the owner at fair market value.

How Much Can You Save With a Solar PPA?

The amount you can save with a solar PPA varies depending on a few factors:

However, you’re going to see the lowest amount of lifetime savings with solar leasing compared to buying your solar panels with cash or with a solar loan. 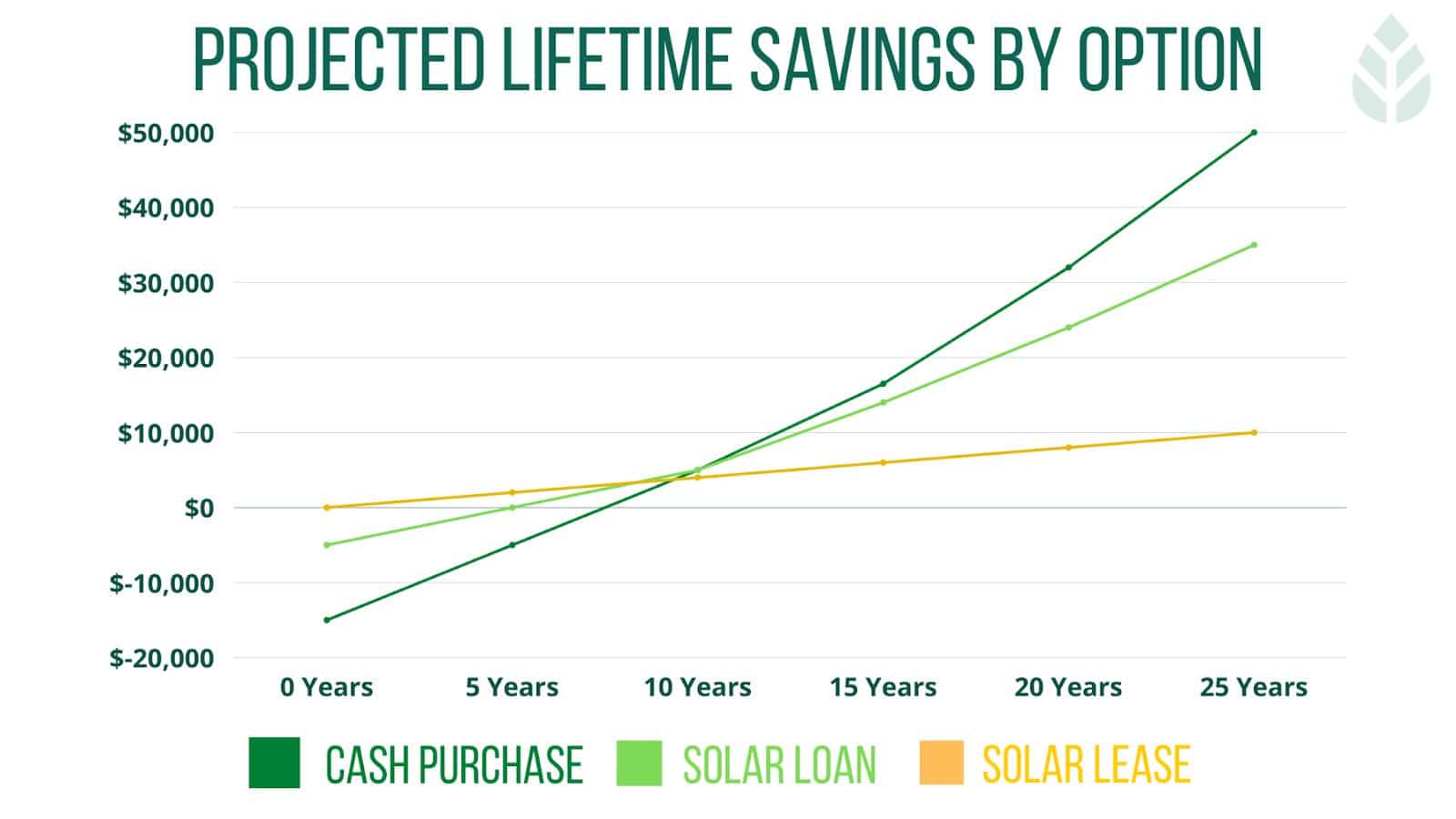 Let’s look at an example to see how much you can save each month with a solar PPA:

Say you’re a homeowner in Vermont where electricity is roughly $0.20 cents per kWh. You enter into a PPA contract with a solar company that charges $0.15 per kWh of solar electricity used.

While that sounds nice, don’t forget you still owe the solar company $150 for the 1,000 kWh of solar energy you used from the solar panels.

In this example, you would end up saving $50 per month with a solar PPA, or $600 per year. That’s not bad, and it’s certainly a bigger savings than not going solar. But if you owned your solar panels you likely would have saved a lot more.

While a solar PPA is a type of solar lease, there’s a difference between the two.

With a solar lease, you make fixed monthly payments for access to the solar equipment — you can think of it as monthly rent for your solar panel system. On the other hand, with a PPA, you’re not paying for the equipment but rather for the solar energy produced by the panels.

In many ways, solar leasing presents a competitive option compared with a PPA. The amount customers pay for a solar lease is determined based on the capacity of the panels, while solar PPAs are paid based on the actual generation and usage.

The difference means that those with solar leases will have a more fixed price that won’t fluctuate with your energy usage. That’s good news during high-energy months, like summer when your AC is cranked on high. But you could pay more with a standard solar lease during months of low energy usage.

Pros and Cons of Solar PPAs

Although a great option for sustainability and energy savings, the decision to go solar comes with many pros and cons, as does each solar financing option. If you’re considering signing a solar PPA, here are a few advantages and disadvantages to keep in mind:

Pros of a Solar PPA

The majority of homeowners who sign a PPA do so because they’re interested in renewable energy production but don’t want to pay the high up-front cost. Installing a solar project with a PPA can seem like the best of both worlds.

A solar PPA allows you to feel good about having a clean energy system without having to shell out tens of thousands of dollars and deal with the installation and permitting process, which can be quite the headache.

Additionally, you get to enjoy lowered electricity bills and possibly even net-metering credits from your utility for the energy your panels produce. While you’ll still be paying a solar developer or third-party owner for the solar electricity your house uses, you’ll have a better idea of energy costs because they’re outlined and locked into a contract. Solar rates won’t increase without warning like electricity rates can.

Cons of a Solar PPA

While there are several pros, the cons of solar PPA weigh a lot heavier in our opinion. Although you’re saving up front, the cost benefits of going solar are significantly reduced when you don’t own your solar panel system.

You can lower your electricity bills with a solar PPA, but when you own your system you have the opportunity to significantly reduce or even eliminate those costs. When you have a solar PPA, you’re always going to be owing a company money for your energy consumption — whether it’s your utility, your solar developer or both.

Sure, solar energy rates are often less than that of standard electricity, but most solar PPAs include a “price escalator.” That means the amount you pay for solar will increase each year, which is an even bigger disadvantage considering the cost of solar PV systems has been decreasing year over year.1

Lastly, having a solar PPA agreement also makes you ineligible for several solar incentives, like the federal investment tax credit (ITC) or solar rebates, which could greatly lower the overall cost of your solar panel system.

Should You Get a Solar PPA?

Ultimately, the way you decide to utilize solar energy is entirely up to you. We typically recommend that homeowners buy their solar panels outright to maximize all of the financial benefits of going solar. But we also recognize this isn’t a realistic option for everybody.

A solar lease or PPA is a good option for homeowners who aren’t in a good position to purchase their own system (whether financially or otherwise), are ineligible for solar tax credits or simply don’t want to deal with system maintenance.

One word of caution: Those advertisements for “free solar panels” are misleading. It’s unlikely that solar panels will ever be free, but you can install solar panels on your home with a $0-down financing option through a solar PPA, lease or solar loan.

The average U.S. solar panel system costs roughly $24,000 before applying any tax credits, so it’s understandable that most homeowners cannot shell out that kind of cash up front. But that doesn’t mean solar leases or PPAs are your only option.

Most of the top solar companies provide plenty of options to finance a solar panel system that you can actually own, or you can look into getting a loan from a government program or your bank.

If you want to know for sure how many panels you need, you can click below to connect with an EcoWatch-vetted installer and get a free estimate. 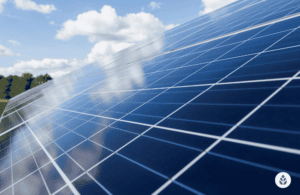 Solar Financing (Good or Bad Idea?) How Long Will It Take for Your Solar Panels To Pay For Themselves? Solar Leasing Guide (Lease or Buy in 2022?) Are 'Free Solar Panels' Really Free?