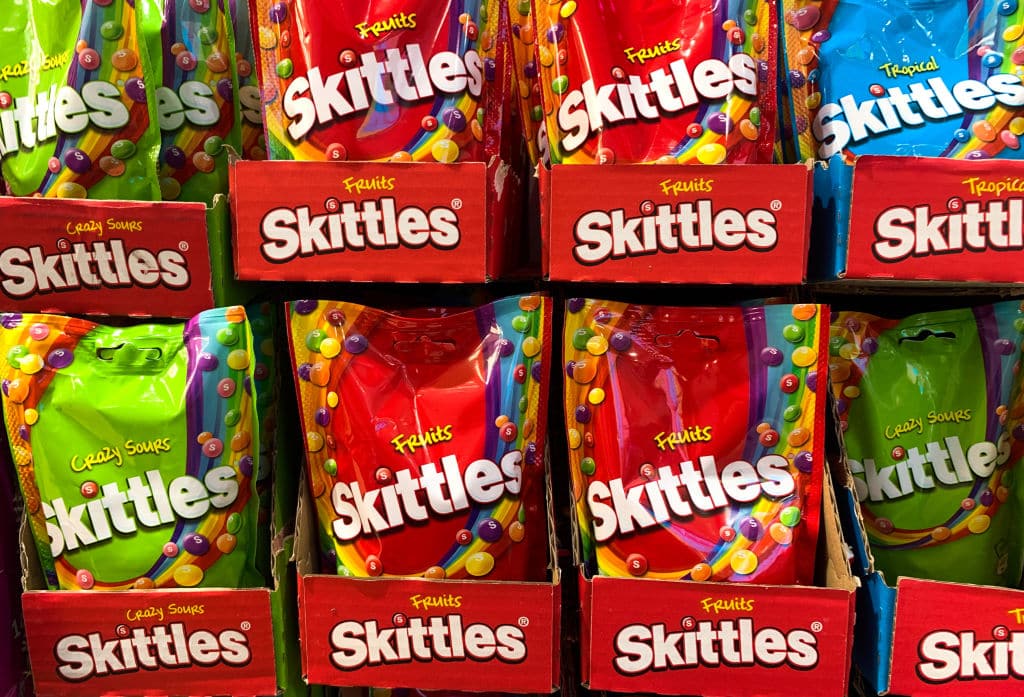 Mars – the company that owns Skittles – invites its customers to “taste the rainbow” when they tear open a package and pour some of the multi-colored candies into their mouths.  However, what they’re really tasting is titanium dioxide (TiO2).

Now, a class-action lawsuit filed in the U.S District Court for the Northern District of California Thursday argues that the coloring chemical is a “known toxin” that renders Skittles “unfit for human consumption,” as USA TODAY reported.

“Based on Defendant’s omissions, a reasonable consumer would expect that the Product can be safely purchased and consumed as marketed and sold,” the lawsuit read, as USA TODAY reported. “However, the Products are not safe and pose a significant health risk to unsuspecting consumers.”

TiO2 was approved by the Food and Drug Administration (FDA) for use in food in 1966, according to the Los Angeles Times. The U.S. agency still maintains that it’s safe to use as food coloring as long as no more than one percent of the weight of the food in question is added.

However, the story is different across the Atlantic. In May of 2021, the European Food Safety Authority said there was enough research to suggest the chemical was not safe to eat. This is because it has been linked to genotoxicity – the ability to damage a person’s DNA and therefore cause cancer. In response, the European Commision has moved to ban the chemical in food by August of this year, according to The Washington Post.

TiO2 represents a common discrepancy between U.S. and EU regulators, as the latter often move to ban potentially harmful food additives earlier, The Guardian pointed out.

“The US often waits until the harm is done and the EU tries to prevent it to a certain extent. It often seems the US favors the market over protection,” European Environmental Bureau chemical manager Tatiana Santos told The Guardian.

However, the California lawsuit contends that Mars should take some responsibility for its own ingredients. The instigator of the suit is San Leandro resident Jenile Thames, according to The Washington Post. Thames said that he would not have purchased Skittles if he had known they contained TiO2, according to Today. The suit seeks damages for fraud and other violations of California’s consumer protection laws.

“Defendant relies on the ingredient list which is provided in miniscule print on the back of the Products, the reading of which is made even more challenging by the lack of contrast in color between the font and packaging,” the lawsuit says, as Today reported.

The suit also argues that Mars doesn’t need to use TiO2 since the company has stopped using it in France, where it is banned, according to Today. Furthermore, candies like Swedish Fish, Nerds and Sour Patch Kids achieve a brilliant color without the chemical.

The company, for its part, maintained that it is abiding by U.S. law.

“While we do not comment on pending litigation, our use of titanium dioxide complies with FDA regulations,” a company spokesperson told Today.

However, the lawsuit pointed out that Mars promised to phase out the chemical in 2016 but has yet to follow through, suggesting it is aware of the health concerns surrounding the ingredient.

“Defendant has flouted its own promise to consumers,” the lawsuit says, as The Washington Post reported. “More than six years later, Defendant continues to sell the Products with [titanium dioxide] unbeknownst to reasonable consumers who purchase the Products.”

Carbon Emissions Labeling on Menus Can Help Reduce Diners’ Carbon Footprints
Earlier this year, the UK began requiring cafés and restaurants
By Cristen Hemingway Jaynes
Food Waste 101: The Facts and Solutions
When one thinks of food waste, many still think that
By Libby Leonard
Solar Panels and Crops Can Coexist, But More Research Needed to Maximize Success
By Kari Lydersen
By Energy News Network