‘She Doesn’t Get Any Peace’: Fame Is a Heavy Burden for Norway’s Favorite Walrus 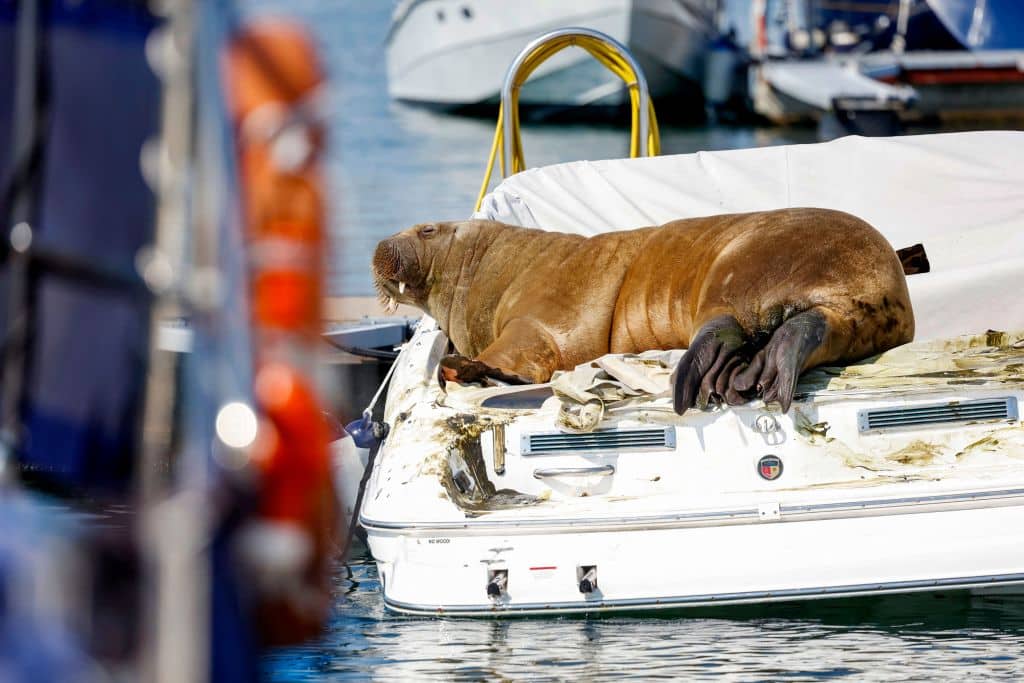 There’s a new star on the scene in Oslo, Norway, who’s won a sudden influx of fans, haters and paparazzi.

No, Freya isn’t a pop idol or a glamorous starlet. She’s a 1,500-pound walrus who’s caused quite a stir by visiting the coastline of the Scandinavian country, as HuffPost reported. She’s also an example of how fame can be a real burden for wildlife.

Freya was first “discovered” when she lounged on a leisure boat in Kragerø, Norway, June 11, as Norway Today reported at the time. Firefighters temporarily succeeded in getting her off the boat, but she climbed right back on.

“So now it will be allowed to lie there until it wants to go out itself,” officer Tom Berger told Norwegian Broadcasting.

Aae, who is a doctoral fellow at the University of Southeast Norway, said Freya had been seen in the area before and had traveled from Denmark in March by way of Sweden.

However, she became a divisive figure in Kragerø because of her propensity to lounge on boats – some of which aren’t “walrus worthy,” as a video posted by Deutsche Welle put it in June – and damage them. Two boat owners told the broadcaster that they wanted Freya to leave, but the walrus has earned her share of fans as well, including on social media.

This has become a problem for her now that she has moved to Frognerkilen, a bay near the Oslo city center. On Tuesday, July 19, she was mobbed by boaters with cameras while lounging on a boat.

“Everything indicated that she wanted to get away. But she couldn’t because she was trapped,” Aae told NTB.

Aae told NTB that walruses like Freya need to rest for as many as 20 hours.

“When she is constantly stressed out by people and their presence, it is not good for her,” Aae told NTB.

He recommended that authorities restrict access to the area where Freya is resting.

To solve the boat problem, biologists tried building a floating platform for her, but she was not interested, Euronews reported. Freya prefers boats with a low stern and a small engine that are easy to access.

“Those who have low boats where the walrus can easily get into, here at Frognerkilen, they should consider whether it’s possible to turn the boat and moor with the stern towards the quay,” biologist Kjell Isaksen told Euronews. “Then there is far less chance of the walrus getting into the boat and causing damage.”

Eventually, researchers hope to return Freya to her home in the Arctic Circle. Until then, they hope she can get used to Oslo. And maybe Oslo can get used to her as well.