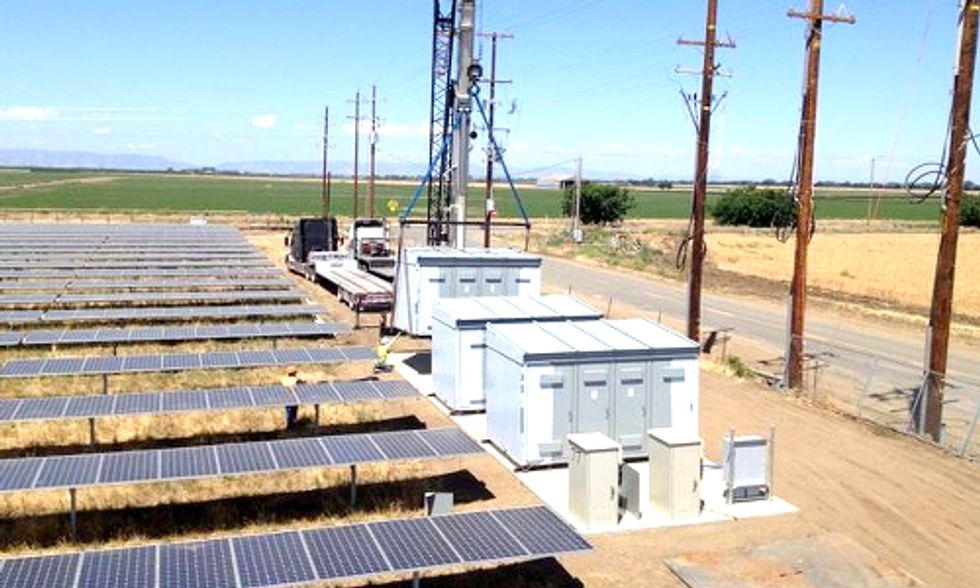 California is known for being a leader in solar energy, but a small county in Northern California has taken things a step further. It has become the first county government in the state to not only zero-out its electric bill with renewable energy, but also to become grid positive.

Terry Vernon, deputy director of Yolo County General Services, is behind much of the solar success. In 2010, the Yolo County government was facing an annual $1.4 million electric bill. Vernon knew there was a better way.

In the 1980s, Vernon helped Stanford University put power back into the grid with a cogeneration plant that heated the entire campus. So he was no stranger to innovative energy solutions, and knew that he could help power Yolo County with renewables. The issue he was facing, however, was that Yolo County was, like the rest of the country, in a recession.

"I had to look for a way to do a zero-capital investment because we didn't have any capital funding," Vernon told RMI. "It had to pay for itself the very first day." Vernon said it took a lot of effort; he had to go to the county board numerous times. Fortunately, the board was extremely supportive of the project. Even before board members knew it would produce a positive cash flow, they saw the potential to reduce the county's carbon footprint and greenhouse gas emissions. Once they approved the proposal, the first solar project was under way.

Working with SunPower, Yolo County installed a 1-megawatt (MW) solar power system at the Yolo County Justice Campus in the county seat, Woodland. Yolo County owns the system and associated renewable energy credits, and financed the purchase using multiple funding sources, including a $2.5 million loan from the California Energy Commission, and clean renewable energy bonds and qualified energy conservation bonds available through the American Recovery and Reinvestment Act of 2009. The system produced $162,000 the first year of operation, and is predicted to earn the county $10 million over the first 25 years.

With the success of that project under his belt, Vernon decided to do even more. In 2013, the county installed three arrays totaling 5.8 MW of power as part of its County Wide Solar Project. The first array produces .8 MW for three buildings on the county government campus in Woodland, reducing the campus' electric bill by 75 percent through net energy metering. Two 2.5 MW arrays were installed at Grassland Regional Park in Davis and sell power back to PG&E, the local utility company, through a feed-in-tariff (FiT). These projects also were installed with no upfront capital investment. In partnership with the Yolo County Office of Education, the county secured $23 million in qualified zone academy bonds (QZAB).

The projects not only eliminated the county's electric bill, but also earned just under $500,000 the first year. The county sells electricity to PG&E for 10-cents/kilowatt hour (kWh), although when its 20-year FiT contract is over, that price might rise. The county conservatively predicts it will generate $60 million over the next 35 years and avoid 12,000 metric tons of carbon dioxide emissions each year. "We not only did it with zero upfront capital investment," Vernon stated, "we eliminated our electrical bill, and we generate cash, which goes into our revenue stream."

In July, the EPA recognized Yolo County on its list of green power partners that generate and consume the largest amount of green power on-site, alongside companies such as Walmart and Apple. Although Yolo County came in 14th in the nation (in January, it moved up to 13th) for amount of kWh used on-site (13.5 million), if ordered by the percentage of total electricity use, Yolo County would be first at 152 percent with no other entity even coming close (second place partners only reach 75 percent).

Even before the solar projects were installed, Yolo County was at the forefront of environmental action. In the 1980s, it adopted an energy plan that was the first of its kind, and built a gas-to-energy facility at the county landfill that generates 20 MWh/year and captures 90 percent of methane emissions. From 2002 to 2004, the county enacted the County Wide Energy Conservation Retrofit Project, through which it replaced lights, boilers, HVAC equipment, chillers, fans, water heaters and motors in all major county buildings.

In 2008, Yolo County approved a plan to change the temperature set points in all county office buildings (3 degrees higher in summer, 2 degrees lower in winter), to change air conditioning and lighting system schedules to the minimum hours per day of operation, and to perform retro-commissioning on all building outdoor air economizer systems, among other actions. These actions annually save the county over $200,000 and reduce carbon emissions by more than 1,200 tons. And in 2011, the county passed the Climate Action Plan, designed to reduce the county's greenhouse gas emissions back to 1990 levels by 2020.

Yolo County officials realized that public education is key to their climate goals. Part of the QZAB education bonds acquired through their partnership with the Yolo County Office of Education, along with a donation from SunPower, financed the construction of seven "solar academies" to bring environmental education to K-12 students. The academies teach school children about climate change, environmental science, renewable energy technologies and energy auditing.

The Qualified Zone Academy Bonds typically are used by K-12 school districts, community college districts and county offices of education to fund capital projects accompanied by an educational component. For Yolo County's solar projects, the bonds were structured as a lease payable from the county's general fund with a term of 20 years. In addition, the bonds required a 10 percent match by a private or nonprofit entity, which came from SunPower. The benefit of using these bonds to finance the county's solar projects is twofold—first, the county benefits from a direct federal subsidy (ability to pay back the bonds at no interest); and second, the County Office of Education benefits from the 10 percent contribution to implement the academies. But "the real winners," explained Vernon, "are the children of California."

Santa Clara County and Orange County already are trying to replicate Yolo County's successes, and Vernon would like to see other counties follow.

"Global warming makes me nervous for my children and grandchildren," Vernon told RMI. "Other counties and municipalities can duplicate a piece of this project and achieve the same results. Even if they only did one megawatt, which most cities can do, it would make a big difference."