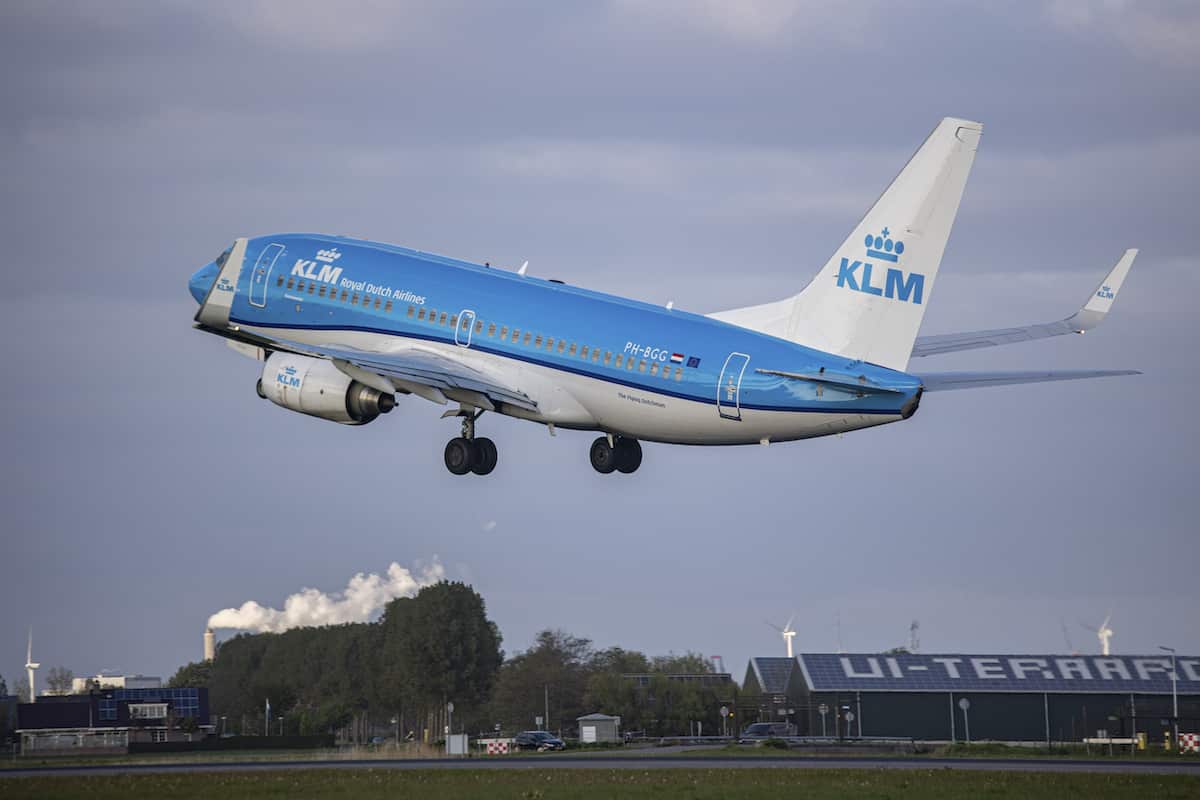 In an ad campaign launched in 2019, KLM Royal Dutch Airlines invited airplane travelers and the rest of the aviation industry to join it in “flying responsibly.” A video advertisement released in July of that year said that customers could achieve this goal by scheduling virtual meetings when possible, taking the train instead, packing lighter and offsetting the carbon dioxide emissions from the flight.

Now, two Dutch environmental groups represented by ClientEarth are taking the airline to court over claims that its “Fly Responsibly” ad campaign amounts to greenwashing.

“We’re going to court to demand KLM tells the truth about its fossil-fuel dependent product.” Hiske Arts, a campaigner at Fossielvrij Netherlands — one of the two groups behind the suit — said in a ClientEarth press release. “Unchecked flying is one of the fastest ways to heat up the planet. Customers need to be informed and protected from claims that suggest it is not.”

In a tweet announcing the suit, Fossielvrij Netherlands said it was the first greenwashing case brought against an airline.

The Climate Case Against Flying

Flying is an extremely carbon-intensive activity. A roundtrip flight across the Atlantic generates the same amount of greenhouse gas emissions as a single European resident heating their home for a year. Therefore, experts argue that air traffic must fall if the industry is to meet its climate goals and achieve net-zero emissions by 2050. A recent report from Transport & Environment, for example, found that the net-zero goal could be achieved by ending EU airport expansion and reducing corporate travel to 50 percent of pre-pandemic levels.

The green groups behind the lawsuit — Reclame Fossielvrij in addition to Fossielvrij Netherlands — argue that KLM’s ad campaign offers frequent flyers a false way out. It tells them that they can offset their flight emissions by paying for reforestation efforts or to support KLM’s acquisition of biofuels. However, funding these projects doesn’t actually compensate for the emissions generated by a present-day flight. These claims therefore violate European laws against misleading consumers, the groups argue.

“Trying to reassure customers on the false premise that a small payment to tree planting projects or ‘sustainable’ fuel contributions compensates for flight emissions undermines urgent climate action, is gravely misleading, and, the claim argues, is unlawful,” ClientEarth lawyer Johnny White said in the press release.

The lawsuit also takes issue with KLM’s claims that it is on track to meet its 2050 goals and “creat[e] a more sustainable future” despite plans to increase sales.

The environmental groups first presented their case to KLM in a letter sent to the company’s Annual General Meeting in May. KLM executives then sat down with the groups’ representatives to discuss the demands a month later.

In the letter, the groups warned the company could face a financial penalty unless it stopped making misleading claims about the sustainability of flying, rectified its illegal actions and put a warning on its website clarifying what flying actually does to the climate.

“We warned that if KLM did not stop misleading advertising, we would see the company in court,” Arts said in the release. “KLM has instead stuck by the false message that it is on the path to more sustainable flying. There is no way it can do this while planning continuous air traffic growth. KLM will now have to defend its misleading claims before a judge.”

The groups filed the case Wednesday with the District Court of Amsterdam, according to Reuters.

In statements to the press, KLM continued to double down on the disrupted claims.

“It would certainly not be in our interests to misinform our customers. It’s our responsibility to make future travel as sustainable as possible,” the company said in a statement reported by Reuters. “We believe that our communications comply with the applicable legislation and regulations.”

The court will now decide if the case can proceed and then rule once KLM has presented its defense, ClientEarth explained.

A day after the case was filed, a new report from InfluenceMap bolstered the claims by the environmental groups that KLM’s business model is not truly climate friendly. In the report, the UK-based nonprofit looked at whether European airlines lobbied the bloc for positive or negative climate policies between 2021 and 2022. What it found was that the industry tended to support a long-term net-zero goal while arguing against the policies that would make that goal possible in the short term.

Further, it noticed a gap between the lobbying efforts of low-budget airlines like easyJet and Ryanair and so-called “legacy” airlines like Air France-KLM, with the latter putting up more opposition to policies that would reduce industry emissions. Of the legacy airlines, KLM was one of the worst offenders, earning a D in InfluenceMap’s A to F ranking of climate policy engagement. For example, KLM lobbied against counting international flights departing from Europe in the EU’s emissions trading system. It also sent an email to the EU Commission in October 2021 apparently opposing a tax on kerosene.

“The aviation sector remains one of the key opponents of effective climate policy in Europe,” InfluenceMap transport analyst Lucca Ewbank said in a statement emailed to EcoWatch. “However there have been some notable shifts within the industry during the past year — in particular from low-cost airlines which have been more vocal in support of some aspects of EU climate policy. This is contrast to the legacy airlines which have all stated top-line support for net zero by 2050, but are continuing to lobby against a broad range of policies that would help achieve that goal. There is now a fairly clear divide between low-cost airlines and their legacy competitors when it comes to climate policy engagement in Europe.”

Is the World Cup Really Carbon Neutral?
The 2022 World Cup kicked off Sunday with a match
By Olivia Rosane
Carbon Emissions Labeling on Menus Can Help Reduce Diners’ Carbon Footprints
Earlier this year, the UK began requiring cafés and restaurants
By Cristen Hemingway Jaynes
Europe’s Largest Battery Storage System Goes Live in UK
As the UK braces for the first full winter since
By Olivia Rosane