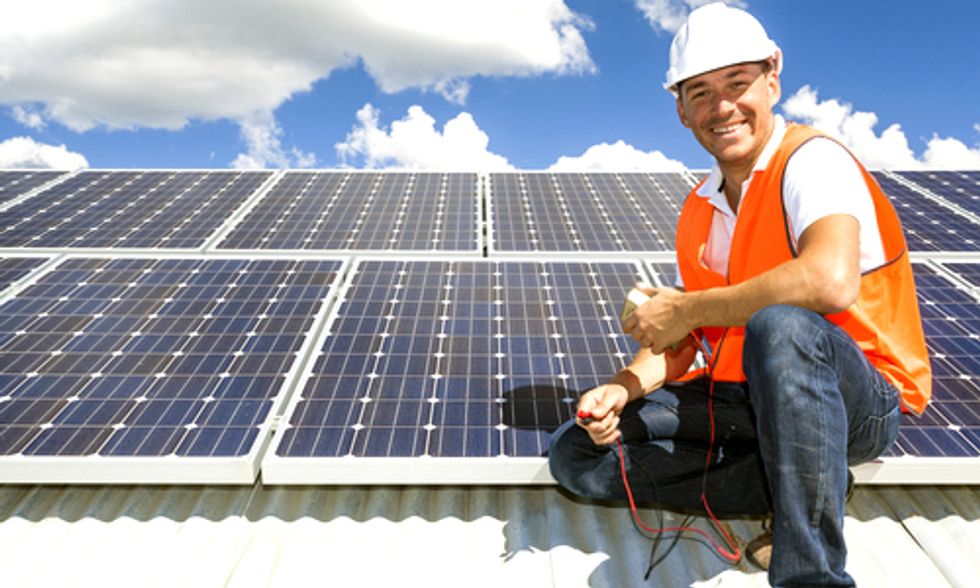 What would Alexandre Edmond Becquerel be thinking now?

In 1839, at the age of just 19, Becquerel built the world’s first photovoltaic panel, later inspiring the imaginations of millions of people worldwide, including legendary scientist Albert Einstein. Still, it took another 115 years before Bell Labs invented the first modern silicon solar cell.

By comparison, it’s no stretch to say that the solar timeline has rocketed forward at warp speed in recent years.

So while 2013 was a record-breaking year for the U.S. solar industry, 2014 promises to be even better with 30 percent growth being forecast.
Photo courtesy of Shutterstock

Continuing its explosive growth, the U.S. solar industry had another record-shattering year in 2013. According to GTM Research and the Solar Energy Industries Association’s (SEIA) Solar Market Insight Year in Review 2013, photovoltaic (PV) installations expanded rapidly last year, increasing 41 percent over 2012 to reach 4,751 megawatts (MW) of new capacity. In addition, 410 MW of concentrating solar power (CSP) came online in 2013. Consumers nationwide benefitted from this growth as the cost to install solar fell throughout the year, ending 15 percent below the record low set at the end of 2012.

What does this mean to you? Well today, solar is the fastest-growing source of renewable energy in America, generating enough clean, reliable and affordable electricity to power more than 2.2 million homes—and we’re just beginning to scratch the surface of our industry’s enormous potential. Last year alone, solar created tens of thousands of new American jobs and pumped tens of billions of dollars into the U.S. economy. In fact, more solar has been installed in the U.S. in the last 18 months than in the 30 previous years combined. That’s a remarkable record of achievement.

California continues to lead the U.S. market and installed more than half of all new U.S. solar in 2013. In fact, the Golden State installed more solar last year than the entire United States did in 2011. North Carolina, Massachusetts and Georgia also had major growth years in 2013, installing 663 megawatts (MW)—more than doubling their combined total from the year before. On the whole, the top five states (California, Arizona, North Carolina, Massachusetts and New Jersey) accounted for 81 percent of all U.S. PV installations in 2013.

Here are some of the other highlights of the report:

So while 2013 was a record-breaking year for the U.S. solar industry, 2014 promises to be even better with 30 percent growth being forecast. Part of this unprecedented expansion is due to the fact that the average price of a solar system has dropped by more than 50 percent since 2010, benefitting consumers, businesses, schools and government entities.

Today, 40 years after SEIA was first formed, there are nearly 143,000 Americans employed by the U.S. solar industry at more than 6,100 American companies—with SEIA leading the fight to expand markets, remove market barriers, strengthen the industry and educate Americans about the benefits of solar energy. These efforts have led to the adoption of a wide range of smart public policies, including the solar Investment Tax Credit (ITC) in Congress and Net Energy Metering (NEM) at the state level.

And to think it all started when a 19-year-old in the 19th century came up with the idea of turning sunlight into electrical energy.