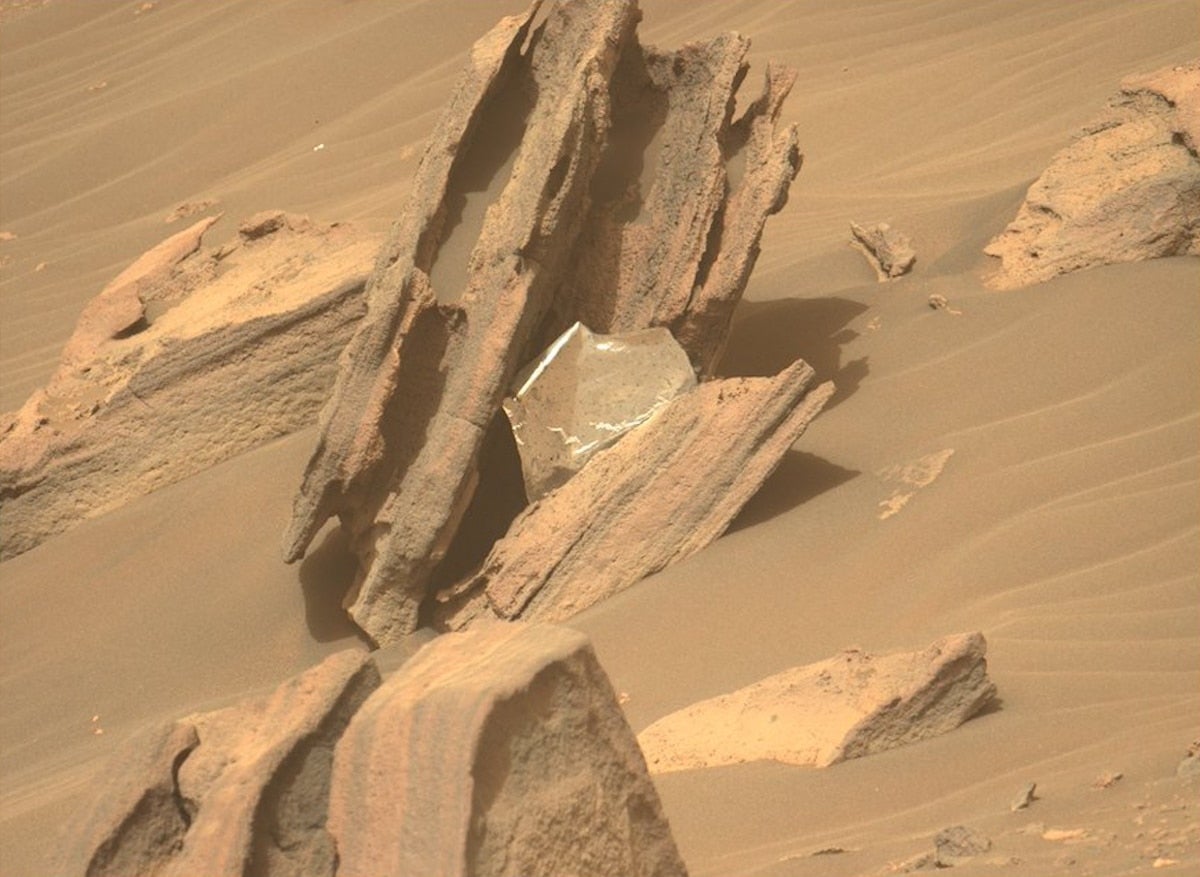 A piece of a thermal blanket detected by NASA’s Perseverance Mars Rover. NASA

No human being has yet set foot on Mars, but something has preceded us.

NASA’s Perseverance Mars Rover announced on its Twitter account Wednesday that it had encountered a piece of human-generated litter on the Red Planet.

“My team has spotted something unexpected: It’s a piece of a thermal blanket that they think may have come from my descent stage, the rocket-powered jet pack that set me down on landing day back in 2021,” the rover tweeted.

Perseverance first landed on Mars in February, 2021, according to HuffPost. Since then, it has been scouring the planet’s Jezero Crater for any evidence of life, Insider reported. Instead, it’s found evidence of the life that sent it there.

The rover team said that it was a “surprise” for it to find the piece of the thermal blanket where it did, since the rover landed about two kilometers (approximately 1.2 miles) away from where it was found.

“Did this piece land here after that, or was it blown here by the wind?” the rover account asked.

Thermal blankets are used to control temperatures, and Perseverance was wrapped up in this foil material ahead of its departure.

The piece of blanket isn’t the only trash that Perseverance has brought to Mars. In April, NASA’s Ingenuity Mars Helicopter took photos of the gear left behind when Perseverance landed.

“The parachute and cone-shaped backshell protected the rover during its fiery descent toward the Martian surface on Feb. 18, 2021,” NASA wrote.

The garbage on Mars is an example of a growing problem: As humans explore space, they leave trash behind. Debris from previous missions includes boots, parachutes and entire vehicles, according to Insider. The Department of Defense’s global Space Surveillance Network sensors currently track more than 27,000 pieces of “space junk” orbiting the Earth, according to NASA.

“Much more debris — too small to be tracked, but large enough to threaten human spaceflight and robotic missions — exists in the near-Earth space environment,” NASA wrote. “Since both the debris and spacecraft are traveling at extremely high speeds (approximately 15,700 mph in low Earth orbit), an impact of even a tiny piece of orbital debris with a spacecraft could create big problems.”

The space trash poses a threat to the International Space Station and other human-populated space vessels. However, there are not many regulations protecting space from this debris, Insider pointed out. For more rules to be enforced, space would have to be defined as humanity’s common heritage, University of San Francisco astronomy professor Aparna Venkatesan said at an event reported by Insider.

“Do we view space as our shared ancestry?” she asked. “Whose heritage is it and how do you honor it?”

These questions beg an answer sooner rather than later. NASA wants to send the first humans to Mars next decade, according to HuffPost. They will likely bring more trash with them.