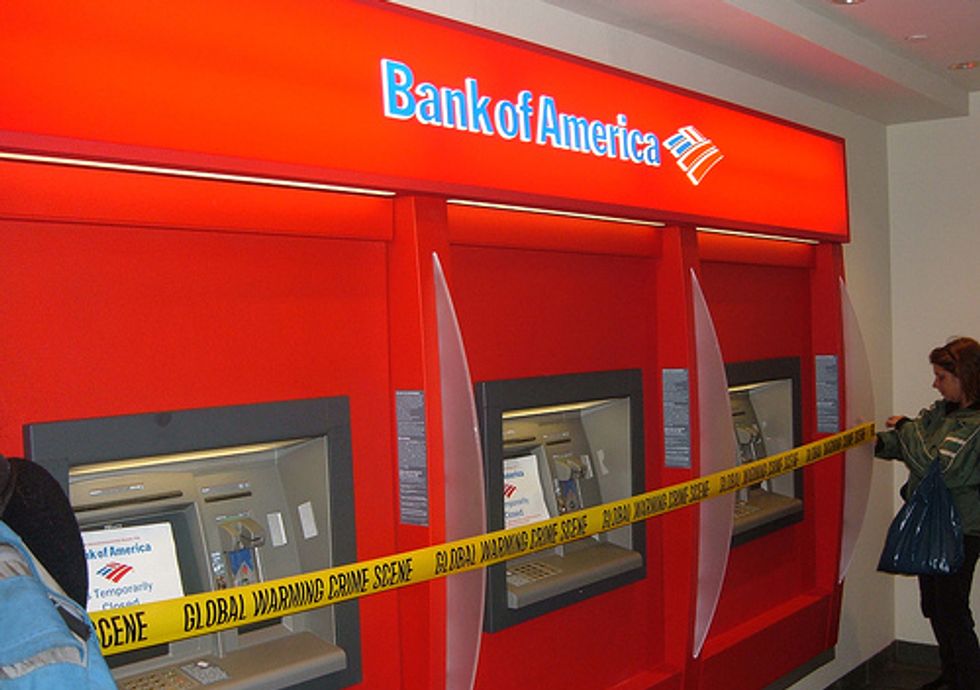 Rainforest Action Network (RAN) and The New Bottom Line teamed up Jan. 9 to launch a new Tumblr blog, called Bankrupting America. This hub on everything Bank of America (BoA) highlights the worst of the big bank’s deeds, personal stories of those that have been hurt by the company and what everyday people are doing to fight back. The website features everything from posts lampooning the company, to on-the-ground organizing efforts, to the latest news and reports on Bank of America activities.

People everywhere are invited to submit content, including their own personal stories of how Bank of America has hurt them, their families and their communities.

Leading up to the anticipated Bank of America shareholder meeting in Charlotte, N.C. this spring, the groups provide a sampling of the widespread public outcry against BoA for the destructive environmental and economic impacts caused by company practices.

“Communities everywhere are fed up with Bank of America for putting profits before people and that’s what this new blog is all about,” said Amanda Starbuck, director of RAN’s Energy and Finance program. “Whether it’s the fact that the company bankrolls climate change through coal investments or forecloses on America’s homeowners while paying top executives millions in bonuses, these are all symptoms of the bank’s lack of morality.”

“Bank of America is one of the prime movers behind the housing crisis and the economic collapse of this country. From being the biggest forecloser in the country to avoiding paying their fair share of taxes to financing payday lenders, they are draining the 99 percent to pad their own bottom line,” said Tracy Van Slyke, co-director for The New Bottom Line. “It’s time we have a new bottom line where Bank of America contributes to the economy, and stops bankrupting it.”

In the final quarter of 2011, unprecedented consumer divestment in Bank of America rippled across the country and can be seen with more than 50,000 pledged account closures and industry analysis suggesting that 20 percent of the bank’s customers are considering leaving. The dissatisfied customers represent only a tiny fraction of those committed to boycott the company until it reforms.

The historic coalition between the environmental and economic justice organizations link struggles against Bank of America to point out three major grievances that hurt both the planet and people. The company leads all others when it comes to foreclosing on America’s homes and financing the U.S. coal industry. As of June 2010, BoA had $88 billion worth of foreclosed homes in its portfolio, and invested more than $4.3 billion in coal. The company has shed nearly 100,000 jobs over the past seven years. And while Bank of America’s stock prices have plummeted in the last few months, executives are set to award themselves near-record bonuses for 2011.

Rainforest Action Network and The New Bottom Line are calling on Bank of America to:

The New Bottom Line (NBL) is a new and growing movement fueled by a coalition of community organizations, congregations, and individuals working together to challenge established big bank interests on behalf of struggling and middle-class communities. Together, we are working to restructure Wall Street to help American families build wealth, close the country’s growing income gap, and advance a vision for how our economy can better serve the many rather than the few. Coalition members include PICO National Network, National People’s Action (NPA), Alliance for a Just Society, and dozens of state and local organizations from around the country.   Rainforest Action Network (RAN) runs hard-hitting campaigns to break North America’s fossil fuels addiction, protect endangered forests and Indigenous rights, and stop destructive investments around the world through education, grassroots organizing, and non-violent direct action. For more information, please visit www.ran.org