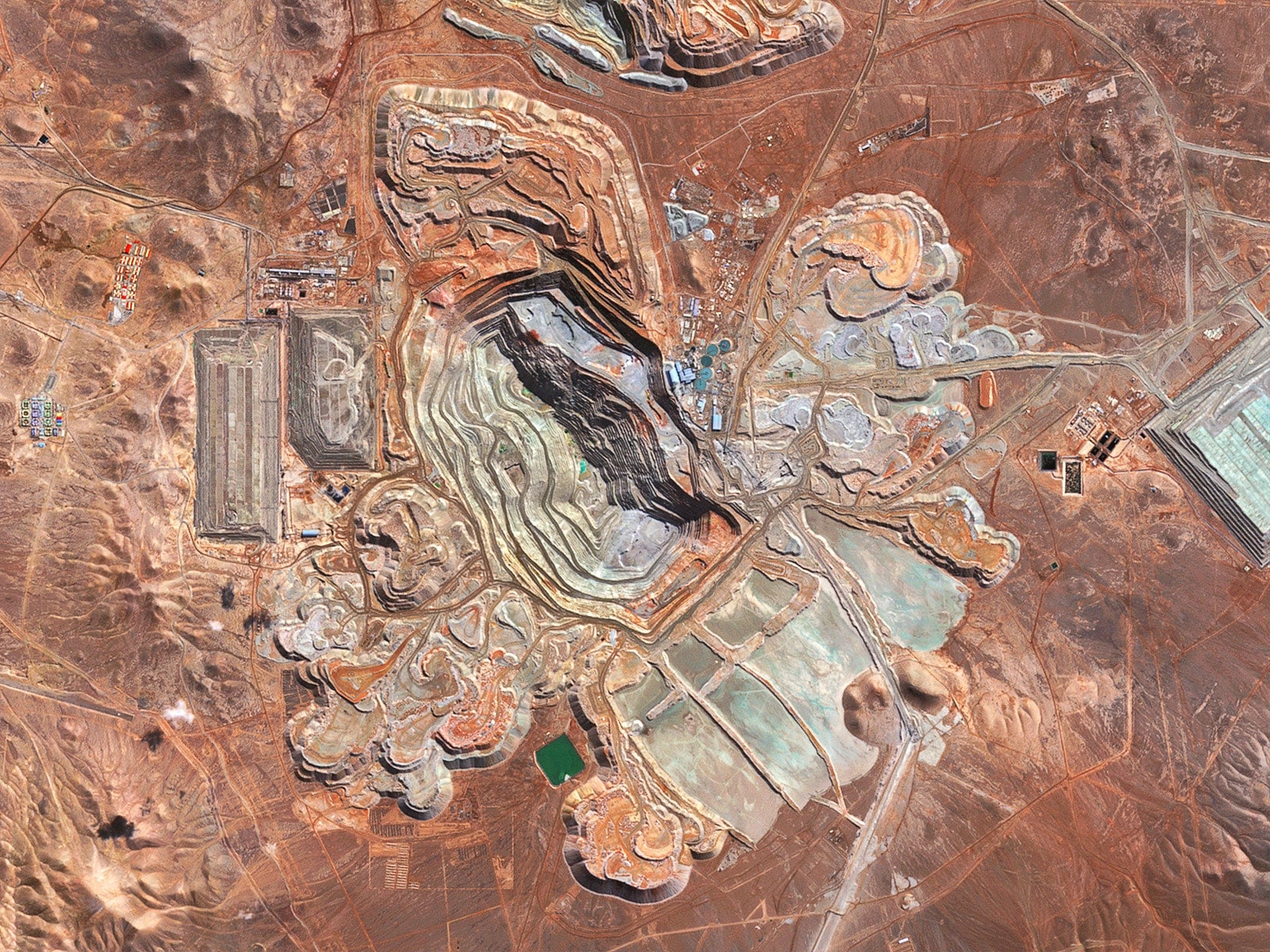 Certain metals are essential to producing renewable energy products, and tellurium (Te) is one that is becoming more widely used in the manufacturing of photovoltaic cells for solar panels.

As an increasing number of people across the world invest in solar panels to meet their energy needs, more tellurium will be required. But because tellurium isn’t a mineral that is mined on its own — most of it is gathered as a by-product of copper mining — how much of it exists isn’t precisely known, according to a press release from The Geological Society of America.

Economic Geologist at the University of Nevada Las Vegas Simon Jowitt and Postdoctoral Fellow at The University of British Columbia Brian McNulty have been trying to figure out where tellurium is located and how much of the crucial metal there is. In October, they presented their work at the annual meeting of the Geological Society of America.

A fundamental hurdle in determining how much tellurium exists has been that the quantity of tellurium found in a mine is seldom documented. So, in order to create a worldwide estimate for tellurium, Jowitt and McNulty came up with proxies.

The results of their first proxy were taken from reports of resource and reserve estimates. A mining company’s own data and estimates for the amount of metal in the ground were used to approximate a mine site’s value.

“[W]hat we do is take that information—which tells us how big the deposit is, how many million tons of ore or mineralization—and we combine that with information that’s published elsewhere on the concentration of tellurium and the deposit,” Jowitt said in the press release.

From those numbers, Jowitt and McNulty were able to come up with an estimate for the amount of tellurium.

“The second proxy is where we know the size of the deposit,” said Jowitt.

“[T]he majority of deposits do not report tellurium resources or reserves, even if the material they mine contain[s] and produces tellurium downstream at a smelter, hence the need for proxy estimates,” Jowitt told EcoWatch in an email.

When the researchers know the size of the deposit, they can use the quantity of minerals related to tellurium, such as the gold-tellurium metal calaverite, for their estimate.

“We can estimate the amount of tellurium in that mineral, combine that with the reported size of the deposit, and again, develop a proxy,” Jowitt said in the press release.

“Gold has also got tellurium byproduct potential as a lot of gold is present as gold tellurides, or minerals that dominantly consist of gold and tellurium. Extraction of the gold leaves the tellurium behind in the material in the tanks used for gold extraction; this material can then be further refined to produce tellurium,” Jowitt told EcoWatch. “This is what is currently happening at the Kankberg gold mine in Sweden, which produces some 40 t/yr of Te by this process, or about 7% of global Te production.”

In their study, Jowitt and McNulty looked at active mines in the U.S. and Canada where tellurium is known to be found. After examining 518 mineral deposits found in the mines, they used their proxies to determine that 18 of the gold mines could produce approximately 90 tons of tellurium each year at the current rate they are being mined.

The researchers also found that approximately 170 tons of additional tellurium could potentially be produced annually in six Canadian zinc, copper and nickel mines. That estimate was a minimum amount, according to Jowitt, as not all of the copper, nickel and gold mines in the two countries were able to provide relevant data.

“If you recovered that tellurium, you could bump up global tellurium production by about 25%,” Jowitt said in the press release. “That’s about seventeen and a half million dollars of tellurium that’s being moved around by the minerals industry but is being lost to waste.”

Despite the fact that tellurium isn’t mined on its own, Jowitt said extracting it isn’t an overly complex endeavor.

“It is not hugely involved once you identify where the tellurium is. It can be extracted as a byproduct during copper processing, which is where we get most of it now. In this approach, the smelting of copper and subsequent electrolytic refining produces anode slimes, which contain tellurium, selenium, bismuth and a lot of other metals you don’t want in your refined copper but do want to potentially extract. These can be sold to other more specialist refineries or processed on site to extract the tellurium,” Jowitt told EcoWatch.

Jowitt said tellurium is only one of many critical minerals that are being unearthed but not extracted during the mining process.

“There’s a whole range of byproduct and co-product elements that [we are] moving around when mining,” Jowitt said in the press release. “We need to do better [at] making mineral mining operations more sustainable by extracting what we can from existing mineral deposits. And if we do that, it’s good for the environment, it’s good for the minerals industry (the way it’s being viewed), and it’s good for company bottom lines.”

So what needs to be done to increase the extraction of wasted tellurium in active mines?

“Understand the behavior of tellurium during mineral processing and hence where it ends up – in copper concentrates, in anode slimes produced by copper smelting, in tank residuals after gold processing and extraction,” Jowitt told EcoWatch. “We can predict these but until we analyze this and obtain this data we cannot really move forward with enhanced tellurium production, or indeed the production of any other byproduct metals, be they critical or not.”

Not only can critical metals be extracted from active mines, but they can also be recovered from old mine sites as well.

“Old mines certainly have high potential, both from mining before we used significant amounts of tellurium and from more recent mining where tellurium is known to be lost to waste, something again that our proxies combined with knowledge of mineral processing can be used to identify,” Jowitt said.

“One possibility is not-for-profit mining, where environmentally problematic former mine sites are rehabilitated by reprocessing mine waste for critical metals and other potential products. This would both remove problematic material like sulfides as well as providing a revenue stream for further environmental cleanup – in other words creating environmental value and wealth from problematic waste materials,” Jowitt told EcoWatch.

While metals can be recovered from old mines, it is better to extract them initially, Jowitt said.

“[I]t is far easier to extract metals and elements like tellurium when we first mine, process, and smelt material from a mine rather than trying to extract it from waste. This, combined with the fact that we have limited mineral resources that will not be replenished, means that we need to be as sustainable as possible in terms of what we can usefully extract from non-renewable resources, tellurium being a good example as we mine more tellurium than we actually produce already, with the majority just lost to waste rather than being recovered,” Jowitt said.

As the green energy technology sector grows, so will the demand for critical metals, and companies will benefit from considering mining more than one critical metal at a time, Jowitt said in the press release.

“The demand estimates for some of these metals are just huge,” Jowitt said. “Unless we start thinking about [mineral extraction] in these kinds of ways, we’re going to end up with situations where metal prices start skyrocketing and climate change mitigation starts slowing down.”

Jowitt said the feasibility of mining multiple critical metals at once varies.

“This depends on the deposit but if we take copper as an example, the anode slimes that are produced during copper smelting and refining contain multiple critical metals that could be extracted, such as Te, Se [Selenium], Bi [Bismuth] and Sb [Antimony]. We already concentrate these metals together, and do extract them at some smelters, but not all; this needs to become more routine as we already mine this material yet do not realize its full potential,” Jowitt told EcoWatch.

The critical metals we need to produce renewable energy products are a limited commodity that we will have to make the most of as demand for them increases.

“Mineral deposits are inherently non-renewable; we mine at a far faster rate than the geological processes that form mineral deposits. Hence it is beholden on us to make the full use of what is essentially a finite resource; otherwise we are being wasteful. There are other considerations, including the fact that the main use of tellurium is solar panel production that use[s] cadmium-tellurium photovoltaic cells; increase the amount of available tellurium, you also increase solar panel production,” Jowitt said.

Jowitt said that while recycling critical metals would be the best strategy, it would not be enough to meet future needs.

“Moving towards a circular economy would be ideal but the demands posed by the energy transition to carbon neutral energy generation, storage and transport means we will need to mine more metal than we already do; recycling cannot meet this increasing demand,” Jowitt said.