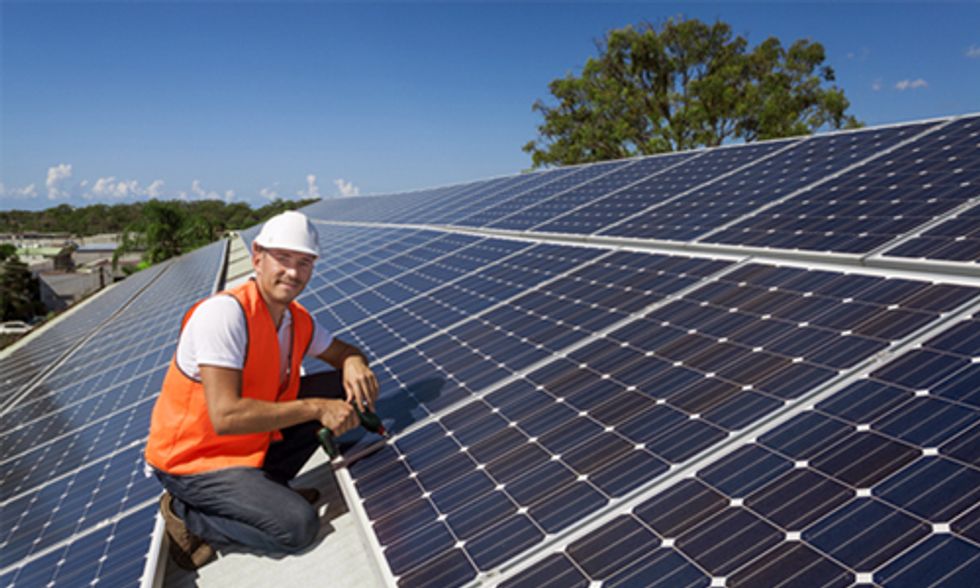 Is it politics at play? Or is it simply a case of sloppy drafting? Whichever the case, West Virginia Gov. Earl Ray Tomblin has a tough choice to make in the next few days. Legislation now on his desk, HB 2201, could jeopardize the future of rooftop solar in the state by rewriting West Virginia’s net-metering policies. Regardless of the motives of the bill’s authors, pure or clandestine, we strongly urge Gov. Tomblin to do the right thing—veto the bill and start over.

Solar is the fastest-growing source of renewable energy in America, employing nearly 175,000 American workers and pumping $15 billion a year into the U.S. economy.
Photo credit: Shutterstock

Here’s the heart of the problem, the legislation unnecessarily duplicates the existing authority of the West Virginia Public Service Commission to carry forward its net metering policy. This “muddies the waters” in respect to the commission’s exercise of discretion to ensure that all customers will pay just and reasonable rates.

Simply put, Solar Energy Industries Association doesn’t object to investigating the costs and benefits of net energy metering, but we do object to the assumption that any potential cost shift from a net metering customer to other customers is unjustified. Retail utility rates often include cost shifts that functionally serve as inter-class and intra-class cross-subsidies. These cost shifts are justified on a variety of rationales, both practical and policy-driven. Unfortunately, this legislation would have the practical effect of stymying—if not killing—the growth of rooftop solar in West Virginia. Most onerously, the legislation fails to protect hundreds of families, businesses and churches that have already installed solar from being hit with unfair charges. It’s neither logical nor fair to rewrite ratemaking rules for one set of customers or one policy initiative, while ignoring similar effects of other rates and policies.

Some of the most common ratemaking cross-subsidies that do not reflect real differences in costs include:

Whether it was by design or by accident, we believe this legislation is fatally flawed, and we strongly urge Gov. Tomblin to veto the bill and tell the state legislature to go back to the drawing board. It’s a bad bill and would establish a bad precedent. Please urge your friends and colleagues to stand up for solar.

Today, solar is the fastest-growing source of renewable energy in America, employing nearly 175,000 American workers and pumping $15 billion a year into the U.S. economy. In the past four years, employment in the solar industry has increased by more than 85 percent —and last year alone, solar created one out of every 78 new jobs in America. What’s more, the U.S. now has an estimated 20 gigawatts (GW) of installed solar energy capacity nationwide, which is enough to power more than 4 million homes—or every single home in a state the size of Massachusetts or New Jersey—with another 20 GW in the pipeline for 2015-16.

Too much is at stake for America to allow a bad idea to take root.