Fossil Free Research
Fossil Free Research is a new campaign to end the toxic influence of fossil fuel money on climate change-related research in universities. It is coordinated by international student divestment and climate justice activists with the support of a wide range of academics, climate experts, and university members, as reflected by the letter below.
EcoWatch is a community of experts publishing quality, science-based content on environmental issues, causes, and solutions for a healthier planet and life.
Mentioned by: 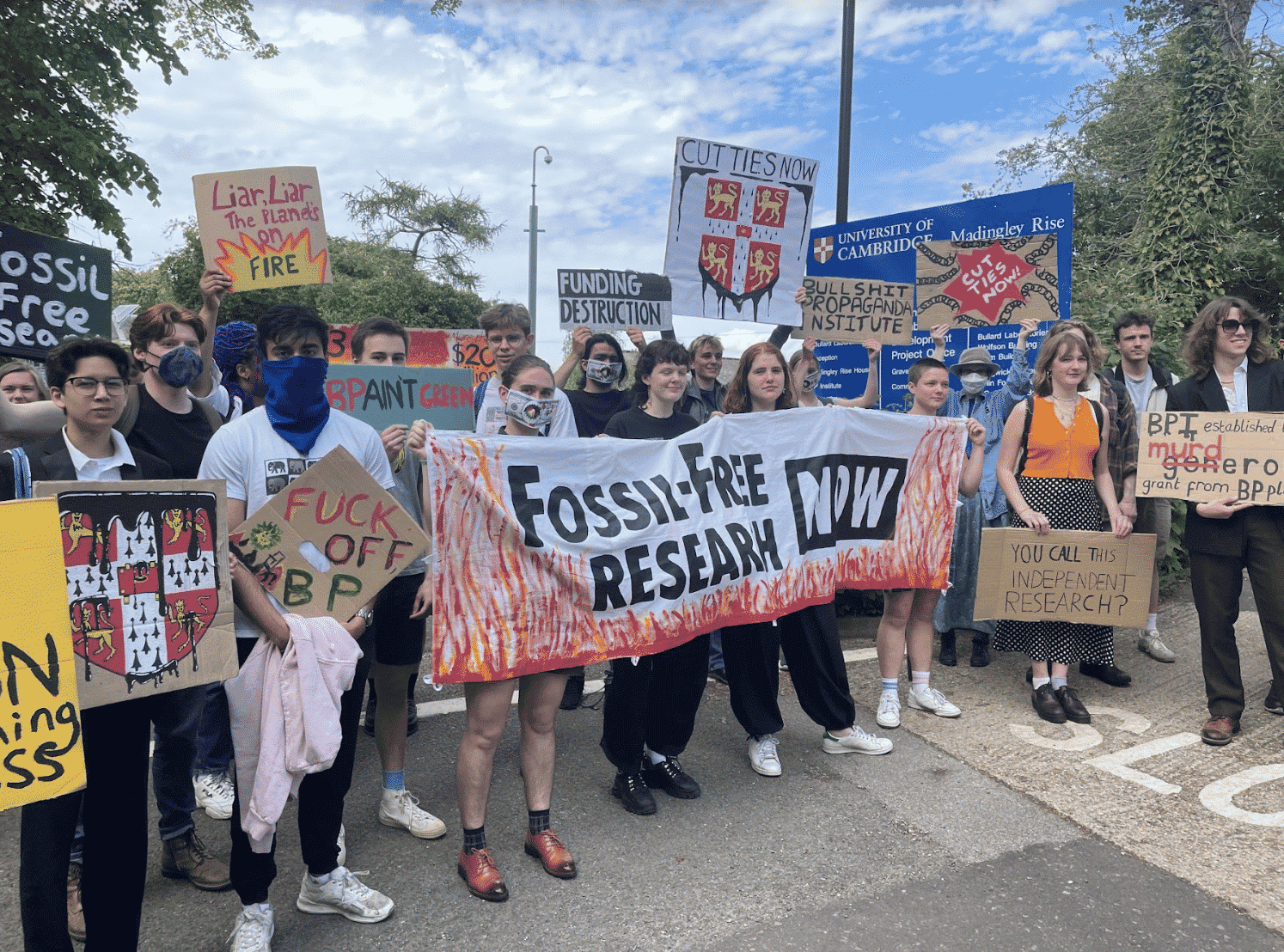 On Tuesday, May 17th, more than 50 of us students, academics, and community allies took direct action to expose the deep hypocrisy of our universities’ collaboration with the fossil fuel industry around critical climate-related research. At Cambridge, we occupied the BP Institute on the West Cambridge campus site for 63 minutes to represent the 63 years that fossil fuel companies have known about the dangers of climate change, while at Oxford, we staged a performance at the Saïd Business School representing the blood on our universities’ hands that results from their partnerships with these companies.

On Tuesday, May 17th, more than 50 of us students, academics, and community allies took direct action to expose the deep hypocrisy of our universities’ collaboration with the fossil fuel industry around critical climate-related research. At Cambridge, we occupied the BP Institute on the West Cambridge campus site for 63 minutes to represent the 63 years that fossil fuel companies have known about the dangers of climate change, while at Oxford, we staged a performance at the Saïd Business School representing the blood on our universities’ hands that results from their partnerships with these companies.

As students at the Universities of Cambridge and Oxford, we are outraged that the institutions meant to prepare us for our futures remain complicit in those futures’ destruction. In recent years, we successfully pushed these universities to divest their endowments from the companies driving climate breakdown. Now, we need them to take the critical next step of dismantling these companies’ influence in elite academia entirely. With less than a decade left to stave off further catastrophic levels of climate change, it is reprehensible that our universities allow the fossil fuel industry to pay for access to seemingly top climate research, along with the veneer of legitimacy and policy influence that such access affords. And it’s not just us students saying this — leading academics and climate experts agree that universities must act.

Right now, however, Cambridge and Oxford are embracing fossil fuel companies in their centers of public knowledge production. Together, these universities accepted around £22 million from major oil firms between 2017-2021 alone. In addition to its BP-funded energy and environmental research institute, Cambridge hosts a research center for the world’s largest oilfield services provider, Schlumberger, which deliberately locates itself by universities in order to benefit from such collaboration. Meanwhile, Oxford’s Centre for Corporate Reputation received a combined total of at least £2.5 million from Shell and Eni in recent years, and the university remains a core academic partner of an oil and gas doctoral training research center funded by the likes of BP, ConocoPhillips, Equinor, ExxonMobil, Total, and Schlumberger.

To break it down, these research partnerships are problematic for five main reasons. First and most obviously, they’re hypocritical. Our universities cannot honestly participate in climate discourse while this money fills their coffers. Second, by attaching their name brands to credible universities, universities help greenwash fossil fuel companies’ reputations and thereby bolster their claims about false climate solutions. Third, fossil fuel money is a recipe for bad climate research. There’s a clear risk of corruption of research outcomes when funding comes from corporate interests with an agenda opposite to the research’s aims ​​— nowhere is that risk more glaring than with climate arsonists funding research around climate solutions. That research can also go on to shape climate policy with disastrous effects, such as by supporting a major US regulatory agency’s decision to lower its estimate of the social harms of carbon emissions.

Fourth, these partnerships have a chilling effect on academic freedom. Academics cannot truly feel free to speak their minds about the fossil fuel industry’s corruption when they depend on industry money. Fifth and finally, this is not just about listening to and defending the integrity of climate science. It’s about climate justice. Companies like BP, Shell, Exxon, and Chevron disproportionately exploit and pollute the same marginalized and low-income communities that are most impacted by climate change around the world. Welcoming these companies into campus research centers supports this destructive enterprise.

As wealthy and elite universities, as well as substantial fossil fuel money recipients, Cambridge and Oxford are uniquely well-positioned to lead the way in championing fossil-free research and have an outsize responsibility to do so. An official ban on fossil fuel research funding would provide a powerful model for universities and research institutions worldwide, having incredible ripple effects. Plus, this policy can easily follow from the commitments to climate action that our universities have already made. For instance, the same list of fossil fuel companies from which Cambridge and Oxford are divesting their endowments could be applied to research. Already, Cambridge has a system of barring energy companies not aligned with its climate position from research collaborations, but that system currently fails to preclude partnerships with notorious oil giants like BP and Shell. To make that policy effective would mean rejecting any money from energy companies that fail to align with Paris Agreement goals — currently, every oil and gas giant — explore for further fossil fuel reserves, or engage in spreading climate misinformation.

Now, we need everyone to help us hold these universities and higher education accountable for institutionalizing Fossil Free Research. UN Secretary-General António Guterres put it best: we are facing “a code red for humanity.” It’s time to sing, chant, petition, rally, and occupy — to do everything we can to expose and dismantle the fossil fuel industry’s toxic grip on academia. Only then can we clear the way for real climate solutions that can support our planet, our communities, and our futures.