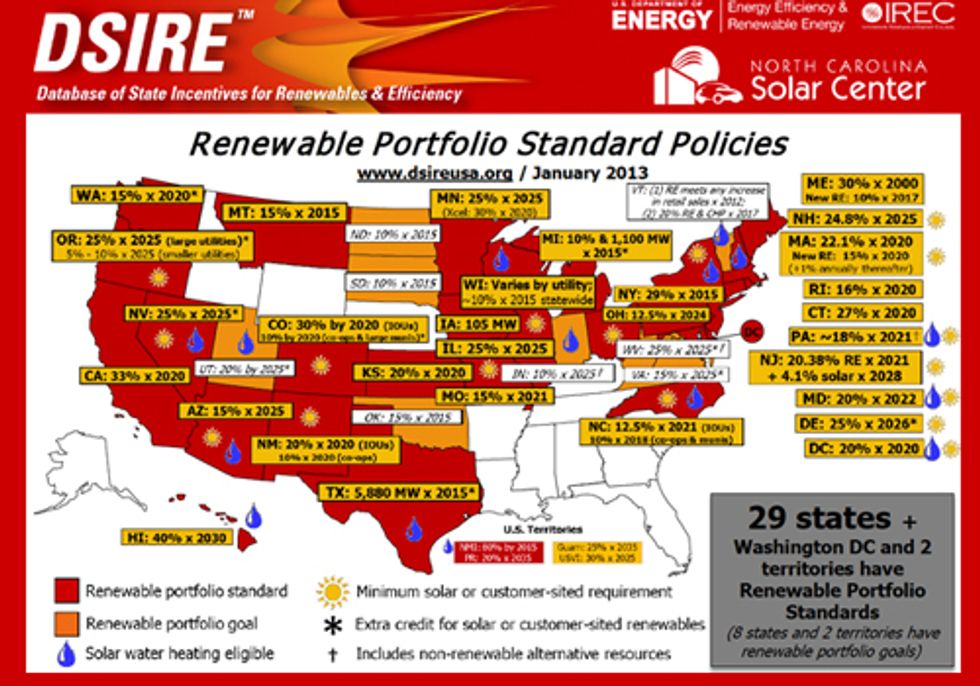 By Matt Kasper and Tom Kenworthy

States’ adoption of renewable energy standards—which require electric utility companies to produce a portion of their electricity from wind, solar, and other renewable sources—has considerably driven clean energy advances in recent years. Though Congress has failed to enact a nationwide standard, policymakers at the state level have enthusiastically filled the void, with 29 states and the District of Columbia adopting hard targets for renewable energy production and another eight states setting renewable energy goals. Standards place an obligation on electricity-supply companies to reach set targets, while renewable energy goals are voluntary for companies—although states might incentivize a utility for reaching a set goal.

Those mandates have brought a wide range of benefits, ranging from robust clean energy economies to lower carbon emissions and improved public health. Since the beginning of 2009, eight states—California, Colorado, Delaware, Hawaii, Kansas, Nevada, New Jersey and New York—have increased their standards, while three states—Indiana, Oklahoma and West Virginia—have established voluntary goals. Six other states—Colorado, Maine, New Mexico, North Carolina, Ohio and Washington state—have beaten back attempts to repeal their standards. Most of the states with renewable energy standards on the books are meeting or are close to meeting their interim targets.

Nonetheless, conservative attacks on state renewable energy standards are on the rise.

Two conservative organizations looking to repeal state renewable energy standard policies are the Heartland Institute and the American Legislative Exchange Council, or ALEC. These two organizations worked together to write model legislation—the Electricity Freedom Act—to roll back state standards. The policy, which ALEC’s board of directors adopted last October, argues that “a renewable energy mandate is essentially a tax on consumers of electricity that forces the use of renewable energy sources beyond what would be called for by real market forces and under conditions of real competition in generation resources.”

ALEC is known for helping advance corporate interests by writing and pushing for passage of conservative legislation at the state level. The organization has been a force in shaping conservative agendas, including voter identification laws and right-to-work policies. In the environmental sphere, ALEC has targeted states that regulate greenhouse gases and has promoted bills supporting hydraulic fracturing, or “fracking;” offshore drilling of oil and natural gas; and nuclear energy. Tax documents show that Koch Industries, ExxonMobil and other energy companies pay membership fees in order to help write legislation repealing carbon-pollution reduction programs in states across the country.

The Heartland Institute is a think tank that promotes skepticism about climate change. Recently, the organization launched a billboard campaign that linked people who care about global warming to Unabomber Ted Kaczynski, murderer Charles Manson and Cuban dictator Fidel Castro. One specific billboard featured a mug shot of Kaczynski with the words, “I still believe in Global Warming. Do you?” In a statement, the president of Heartland unapologetically called the billboard campaign an “experiment.”

With ALEC’s ability to successfully pass conservative legislation at the state level and the Heartland Institute’s intentions to attack policies that combat climate change, the threat that state renewable energy standard policies could be repealed needs to be taken seriously and aggressively contested.

ALEC and Heartland seem to be targeting North Carolina first. North Carolina State Rep. Mike Hager (R), a member of ALEC, says he is confident that in the upcoming session in his state’s general assembly, the votes exist to repeal or weaken the state’s renewable energy standard. Rep. Hager is the majority whip and the chairman of the Public Utilities Committee in the North Carolina General Assembly. But the bill that implemented the state’s standard passed 107-9 in the House in 2007—a resounding message Rep. Hager should recognize.

Last fall, however, fossil fuel interests funded a successful effort to defeat a constitutional amendment in Michigan that would have increased the state’s renewable energy standard from 10 percent in 2015 to 25 percent in 2025.

But voters in the eight states that have strengthened standards understand that these policies improve the environment and stimulate their state economies. California went from a 20 percent standard by 2010 to a 33 percent standard by 2020—and is currently on track to meet that 33 percent target. California’s three investor-owned utilities, or IOUs, achieved 18 percent of 2010 retail electricity sales with renewable energy. The three investor-owned utilities hit 20.6 percent renewables at the end of 2011. When California, the ninth-largest economy in the world, establishes a 33 percent renewable energy standard, it sends a clear message to every other state that renewable energy provides reliable, cost-effective clean electricity and strengthens the economy.

Long-term commitments to purchase renewable energy from wind, solar or geothermal sources enable developers to secure financing for such facilities, allowing the market for renewable energy to stabilize and grow. Long-term commitments also lock in electricity prices, helping shield ratepayers from price volatility that is typical of electricity purchased from coal and natural gas facilities.

And California is not the only state in recent years to set a higher standard. Colorado has increased its standard twice since 2004, rising from 10 percent to its current level of 30 percent by 2020. New York originally had a 25 percent renewable energy standard by 2013, but lawmakers in 2010 increased the standard to 30 percent by 2015.

The renewable energy standard program in New York continues to yield significant economic benefits—as it does in all the states that create standards. The planning, development, construction, and operation of renewable energy facilities create short-term and long-term jobs while benefiting local governments and school districts through property taxes and other leases or royalty payments. An analysis conducted in 2009 concluded that $6 billion in direct economic benefits are expected if New York meets its 30 percent target—and this analysis did not even include estimates of the multiplier effects that can accompany direct economic impacts.

In January 2012 London Economics International LLC prepared an in-depth analysis of Maine’s renewable energy standard, required by legislation enacted in 2011. The report found that policies in Maine and New England would create 11,700 jobs in Maine alone over several years. In addition, $1.14 billion of new investment will occur in Maine as more renewable energy facilities are constructed. The report also found that electricity prices will lower for consumers as more wind energy is developed in New England.

Some politically conservative states also recognize the benefits from these standards. In Kansas, for example, House Bill 2369, enacted in May 2009 but finalized in 2010, established the state’s first renewable energy standard. The law requires investor-owned utilities to generate or purchase 20 percent of peak demand capacity electricity from renewable energy facilities by 2020. The eligible generation sources include wind, solar energy (both thermal and photovoltaics), methane from landfills or wastewater treatment, hydropower and biomass.

The American Wind Energy Association highlights Kansas’s renewable energy standard policy as a driving factor in helping the state attract wind projects and manufacturers like Siemens. According to the Kansas Energy Information Network, 11 of Kansas’s 21 wind farms began operating between 2010 and 2012—eight of them in 2012 alone.

Empire District Electric, a Kansas utility, had already decided to purchase wind power due to the high natural gas prices at the time, and also purchased a high percentage of natural gas base load generation. Empire wrote to its shareholders, “[Wind energy power purchase agreements] decrease our exposure to natural gas, provide a hedge against any future global warming legislation and help us give our customers lower, more stable prices.”

Also prior to the renewable energy standard legislation, the Kansas City Board of Public Utilities saw wind power as “a hedge against high market purchase prices” and estimated that their 20-year power purchase agreement for wind power would save the utility $3 million during the first decade.

The Kansas Corporation Commission, which established the rules and regulations in 2010 for the state’s renewable energy standard, recognized the problems caused by volatile fossil fuel prices, noting that wind energy in a state’s energy portfolio protects consumers. The commission stated:

Natural gas, coal and wholesale power prices have all experienced significant volatility and upward trending costs. Wind generation provides value as insurance for customers from some of the effects of unexpectedly high and volatile fuel and wholesale energy prices.

In upcoming state battles, ALEC and the Heartland Institute will almost certainly claim that renewable electricity standards raise power rates for consumers compared to states without clean energy requirements. That claim is false, however, as Richard Caperton, director for Clean Energy Investment at the Center for American Progress (CAP), demonstrated in a CAP issue brief last April.

Therefore, with no price impact on consumers of electricity, tremendous economic benefits, and utility companies praising renewable energy standard laws, it would be a mistake for state lawmakers to enact legislation written by ALEC and the Heartland Institute that repeals such standards.

Why we should enact a nationwide renewable energy standard

In his 2011 State of the Union address, President Barack Obama proposed a federal “clean energy standard,” which would require utility companies to produce 80 percent of their electricity from no- or low-carbon sources by 2035. CAP has recommended that an 80 percent clean energy standard should also include a requirement that 35 percent of electricity generation come from renewable sources and efficiency measures. This standard should be met by requiring a national target of 25 percent renewable electricity generation alongside a requirement that utilities reduce demand to save energy by 10 percent.

An analysis conducted by the Union of Concerned Scientists found that a national standard that requires all electric utilities to increase usage of renewable electricity to at least 25 percent by 2025 would create jobs, lower energy bills, and reduce harmful pollution. The analysis specifically found that 297,000 jobs would be created, $263.4 billion in new capital investment would occur with an additional $11.5 billion going to local communities from new property taxes, and consumers would save $64.3 billion in lower electricity and natural gas bills by 2025.