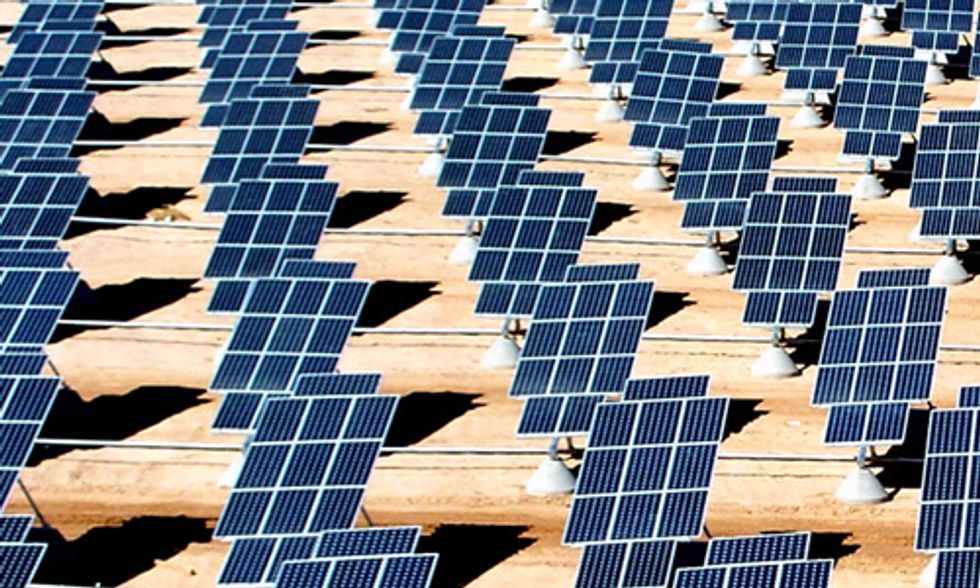 Forty four years ago, on the first Earth Day, we were only using solar cells on satellites. NASA was still four years away from launching the program that would give birth to the modern wind turbine.

Fast forward to the present and renewable energy is beating fossil fuels on every front. Every day seems to bring more news of another city or company that has blown past its clean energy targets, or another region where solar and wind power are now cheaper than coal and gas.

The question is no longer if we can create an economy powered by 100 percent clean energy, but how fast we can do it and who will own it. Photo credit: Wikipedia

The chart below is a snapshot of life on the cusp of a new energy era. Between October 2013 and March 2014, 80 percent of the new electricity installed in the U.S. was renewable energy. In California, where I live, we installed more solar in 2013 than in the previous 30 years combined.

For three of the last six months, 100 percent of all of the new electricity added to the U.S. grid was renewable energy. That’s 80 percent renewables in total — and over half of that was solar. Natural gas made up the remainder, and conventional oil was a mere .02 percent. This is what the future of energy looks like.

The question is no longer if we can create an economy powered by 100 percent clean energy, but how fast we can do it and who will own it. Will we act with the vision and speed necessary to avert catastrophic climate change? Will we create an energy system that profits a few mega-corporations or one whose benefits flow to all of our communities?

My company, Mosaic, is allowing more people to invest in solar. We believe that the fastest way to build a world powered by 100 percent clean energy is to give everyone the opportunity to profit from it. Our investors help to accelerate the transition to clean energy by providing affordable financing for solar projects. In turn, our investors receive good returns, grounded in tangible assets in communities all across the country.

Since the first Earth Day, our scientists and engineers have accomplished nothing short of a miracle. For the first time in modern history, we have the technology to build a world powered entirely by wind, water and sunlight. Now it’s time for all of us to build.