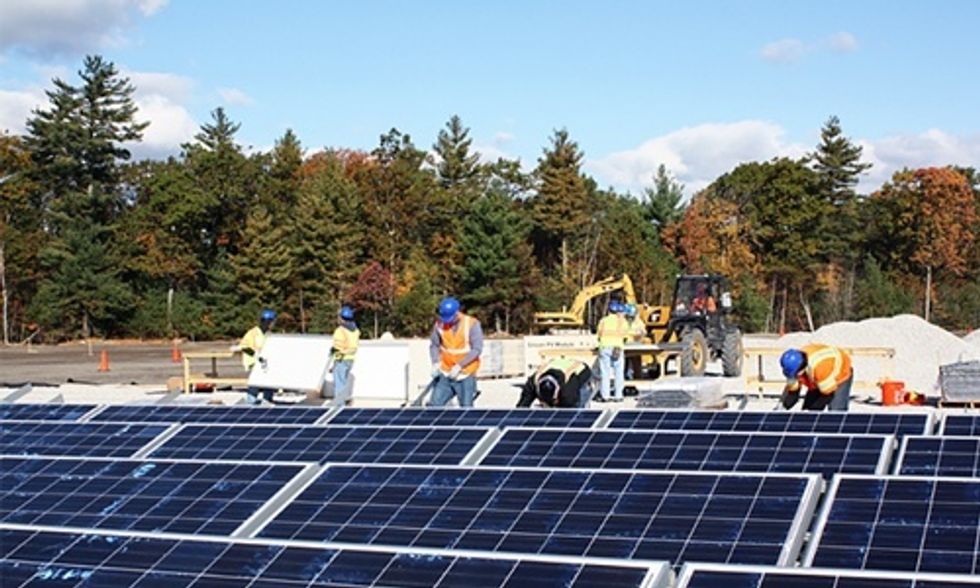 2015 has been a big year for renewable energy in the U.S., with solar and wind power growing like crazy—providing more than 5 percent of the nation's electricity for the first time—and the country's first offshore wind power project finally under construction.

The truth is, 2015 has been one in a series of very good years for these pollution-free, renewable resources—years that are helping us get on track for the low-carbon future we need and need now.

These policies don't just help level the playing field for clean energy—fossil fuels have received federal subsidies for almost a century, after all—they also drive renewable energy demand, thereby speeding economies of scale, spurring competition in the marketplace and investment in new technologies. The production tax credit (PTC) for wind power, the solar investment tax credit (ITC) and the ITC for offshore wind power will keep us on the right track.

Together, these tax credits will help our country go a long way toward realizing the bold clean energy goals of a large majority of the American public, 69 percent of whom endorse federal subsidies for renewable energy.

Just how good is our clean energy situation getting? Well, recently, the U.S. Department of Energy released these very happy-making charts (below) that emphasize renewable energy's huge growth and equally huge price declines in recent years.

In 2015, those particularly excellent trends continued. Though we won't have complete data until next spring, the country will likely install 7.4 gigawatts of solar energy through Dec. 31 of this year. That's enough to juice up more than 1.6 million homes and a full 24 percent rise over 2014. Wind power is also flying, with almost 3.6 gigawatts—1 million homes-worth—coming online in the first three quarters of this year and more than 13,000 megawatts now under construction.

These U.S. Department of Energy graphs show how the prices of wind and solar power have plummeted as installation has soared. We saw more of the same in 2015 and can expect similar growth in 2016 and beyond, thanks to Congress's renewal last week of key clean energy tax incentives. Photo credit: U.S. DEP

This year also found several regions where pollution-free, solar and wind energy became cost-competitive with conventional power. That power, fired by coal and natural gas, masquerades as cheap but actually foists expensive public health and environmental problems on us all.

Wind and Solar Jobs Are Soaring

In 2015, solar and wind energy employment also soared. In January, the National Solar Jobs Census reported that solar jobs had climbed to almost 174,000, up by more than 31,000 over the previous year, with another 36,000 solar jobs projected in 2015. (Industry jobs are up by a mind-boggling 80,000 since 2010.) In August, the Department of Energy reported that wind energy jobs jumped to 73,000, up from 50,500 over the previous year, thanks to a short-term extension of the PTC.

Also in August, the U.S. Environmental Protection Agency's Clean Power Plan to cut carbon emissions from the nation's electric sector introduced its Clean Energy Incentive Program, designed to bring more clean energy online faster; it will begin in 2020, two years before the Clean Power Plan as a whole. Overall, the Clean Power Plan can jumpstart enough renewable energy to supply, by 2030, about 12 percent of the nation's electricity. And we can push those deployment graph slopes further upward—we can install even more wind and solar power—now that the PTC, the solar ITC and the offshore wind power ITC have been secured. They'll help us keep that momentum going until the Clean Energy Incentive Program kicks in. As they have already, incentives that increase deployment lower clean energy prices. And the cheaper renewable energy is, the more it will become of the energy source of choice, replacing polluting power.

2015: A Year of Innovation and Progress

This year has seen amazing advances in renewable energy. Here are just some of them:

• Exponential increases in energy storage that can capture excess wind and solar power and use it when it's needed most.

• Department of Energy funding for potentially revolutionary technologies, like a morphing wind turbine blade that can increase generating capacity 10 times and a new kind of offshore wind power that produces electricity much in the way a lightning cloud does, by sending an electrical charge through water vapor.

• And, let's not forget those billions in new clean energy research and development capital pledged by some of the world's wealthiest individuals at the Paris climate talks just three weeks ago.

In 2015, we've made so much progress in solar and wind power. And now, with the help of smart, federal clean energy incentives, we're on track for much, much more. 2016 promises to double the total amount of solar installed in the U.S. (think about that: double!). There are more than 13,000 megawatts of wind power in the works, too and much more likely to come, now that Congress has extended the PTC. Thanks to the perceptive heads in Congress who worked out a bipartisan agreement, there's no end to that progress now.