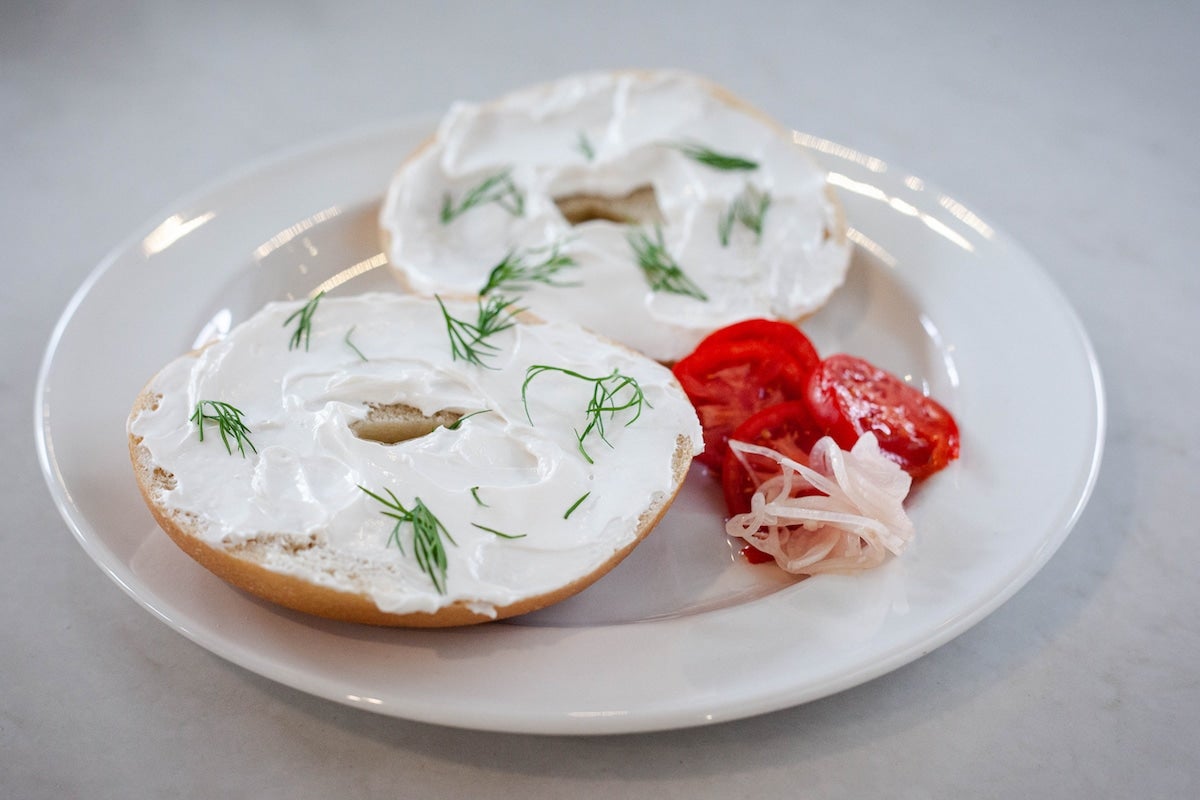 Imagine drinking a frothy, creamy milkshake — or maybe a cheesy, melty slice of pizza with a perfect cheese pull. Perhaps you start your day with a foamy cappuccino, or a bowl of your favorite yogurt topped with berries. Now, imagine enjoying your favorite dairy-filled treats, but ones that weren’t produced with cow-made milk.

600 million tons of milk are produced annually by 270 million cows, which require huge amounts of water, food, and land to raise, all the while releasing methane — a climate-warming gas — into the atmosphere. While plant-based milk, cheese, and other dairy products have become more plentiful and offer an alternative to traditional dairy, they often don’t replicate the original taste and texture, as the cheese might not be as melty, or the milk as frothy.

That’s where precise fermentation comes in. Companies — including many food technology startups — have begun making products identical in taste, texture, and nutrients to traditional dairy from cows, but without any animals, possibly altering the future of the entire dairy industry.

How Does Precise Fermentation Work?

Historically, precise fermentation has been used to make insulin and vitamins, but it is now being used to produce dairy products, too.

In the 1990s, precise fermentation started being employed to make cheese. Microorganisms were used to produce the enzyme chymosin, a key component of rennet, which is essential for making cheese, and was previously obtained by slaughtering young calves and harvesting the protein from their stomach lining. Now, about 80% of rennet is harvested from microorganisms instead, so if you eat cheese, it’s likely that you’ve already consumed precise-fermentation-produced proteins!

Basically, precise fermentation uses microbes to produce milk proteins — casein and whey, primarily — without the cows. Think of how beer is produced: during the fermentation process, yeast (a microorganism) consumes plant sugars, and then secretes alcohol. Precise fermentation works similarly. Dairy protein DNA sequences are encoded onto the microorganisms (like yeast or fungi) and then fermented, producing those milk proteins like whey and casein within about two weeks.

These resulting proteins from the fermentation process are identical to the ones found in cow’s milk, and are used as the base for dairy products. This means they have the same taste, texture, and nutritional content as cow-made dairy and can be melted, whipped, and frothed: all that we expect of milk products, because functionally, it’s the same.

What Are the Benefits of Precise Fermentation?

It’s Better for the Climate

Cattle need huge amounts of food, water, land, and often antibiotics and hormones to produce milk, which takes a huge toll on the environment.

A third of the country’s agricultural land is taken up by corn and soy, only 10% of which is consumed by humans; the vast majority is needed to feed animals raised for human consumption. Deforestation, degradation of the land, and loss of biodiversity all result from this land use. While dairy-free alternative milk products can be made from peas, rice, oats, almonds, cashews, soybeans, and even potatoes, growing these products still contributes to deforestation. According to Grist, soybeans — one of the highest sources of plant protein — require 1,700 times more land than precise fermentation to reach the same nutrient yields.

Overall, livestock are also responsible for 14.5% of all greenhouse gas emissions. Cows alone produce 2220 pounds of methane per year, which is emitted into the atmosphere as a greenhouse gas 30x more potent than carbon dioxide.

Precise fermentation eliminates the huge use of resources required for producing conventional dairy. Perfect Day — a dairy company using precise-fermentation techniques — found that their product represents a 99% reduction in water consumption, 97% in carbon emissions, and 60% in energy usage.

Its Input-to-Output Ratio Is More Efficient

Besides the reduced need for natural resources, in terms of calories produced vs. calories consumed, precise fermentation is much more efficient. Of all the feed consumed by U.S. livestock, less than 10% of feed calories or protein translate to calories consumed as meat, milk, or eggs by humans. This represents a huge loss of available calories and nutrients throughout the process of raising livestock, which is avoided through precise fermentation.

It Involves No Animal Exploitation

Animal abuse is well-documented in the factory farming and dairy industries. Milk cows are usually kept indoors and are often tethered, with little or no room to move around for their entire lives. They are artificially inseminated to keep up their milk production, and are forcibly separated from their calves after giving birth. Milk produced through precise fermentation, on the other hand, doesn’t require any animals at all to produce dairy products.

Dairy products made through precise fermentation often have more nutrients than conventional products. Betterland Milk says that their formula requires only one-third of the sugar of whole milk, and has no animal fats that are high in cholesterol. It is also shelf-stable for up to a year, so no refrigeration is required, further cutting down on energy usage.

What Companies Are Using Precise Fermentation?

Perfect Day — the first lab-grown dairy company — was an early producer of dairy made through precise fermentation. In the late 2000s, scientists sequenced the genome of cows, then two bioengineers (who would later go on to found the company) copied the genetic code into the DNA of yeast. This programmed the microbes to brew dairy, rather than alcohol. The company produced a very successful line of ice cream, and now makes the world’s first animal-free whey protein powder.

Formo is a Berlin-based company, and they want to bring the future of food to life through “science, cheese, and conversation.” Cheese is their main product, and the proteins they use are entirely lactose-, hormone-, GMO-, and antibiotic-free. Last year, the company earned $50 million in a financing round, setting a record for European foodtech. “We have identified cheese as the most substantial consumer pain point when it comes to replacing animal products in our diet,” Formo’s co-founder Dr. Britta Winterberg told The Vegan Review. “Our products are not like cheese, they are cheese. They provide the same functionality, taste, nutrition, and texture as animal-based cheeses, but use substantially fewer resources, creating fewer emissions and being 100% animal-free.”

Remilk is planning for the world’s largest precision fermentation plant to be built in Kalundborg, Denmark. The facility — which will be 750,000 feet — will create the equivalent volume of dairy proteins as 50,000 cows produce per year, according to Grist.

How Might These Dairy Products Change Our Food Systems?

Non-dairy products are often rather pricey, and are usually more expensive than their dairy counterparts, making a plant-based diet inaccessible to some consumers. But, dairy products made through precise fermentation might soon become more economically advantageous than traditional dairy. RethinkX, a food think tank, estimates that precision fermentation products will cost at least 50% and as much as 80% less than the animal products they are replacing.