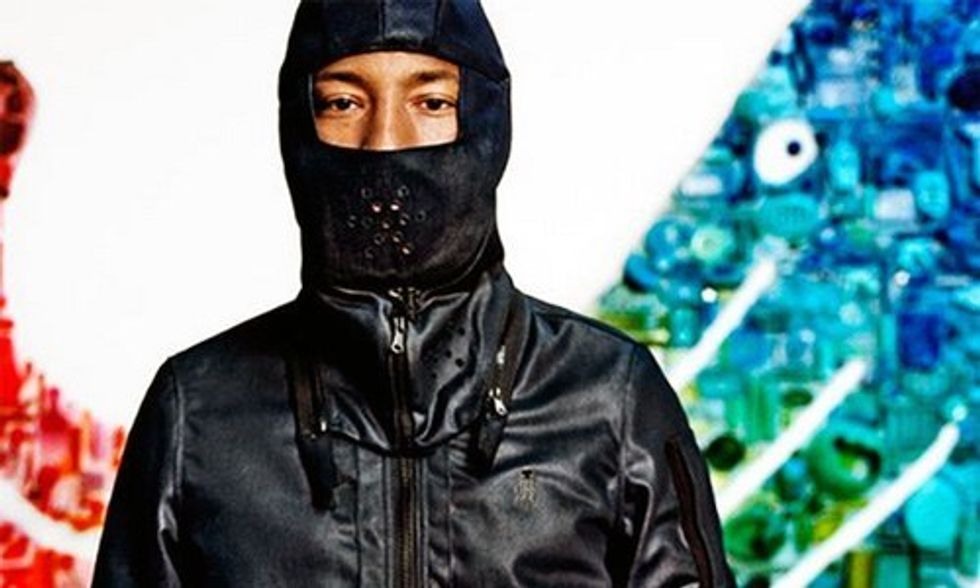 Pharrell Williams is turning the tide on ocean pollution. For the third time, the multi-talented musician and entrepreneur has partnered with G-Star Raw, Bionic Yarn and Parley for the Oceans to deliver the "Raw for the Oceans" Fall/Winter 2015 collection that features clothing made from recycled ocean plastic.

This season's collection has items for both men and women, such as distressed jeans, denim jackets, hoodies, coats, T-shirts and tank tops. In the photo above, Pharrell wears the unisex Occotis HDD Bomber, which was designed by the talented singer himself.

The clothing line boasts that in its three seasons, the equivalent of 2 million plastic containers have been recovered from ocean coastlines around the world. The pieces contain thread spun by Bionic Yarn, a New York-based company (co-founded by Pharrell) that takes materials such as plastic bottles and recovered ocean plastic, breaks them down into chips and shreds them into fibers.

The Grammy winner hopes his latest project will be a solution to plastic waste in our oceans.

"We have a connection with the ocean," he said. "It yields so much life, including our own. We owe it."

Last April, a documentary featuring Pharrell called "The Plastic Age" highlighted the omnipresence of plastics in our lives and how fashion can play a role in solving the problem. Watch below:

Getting plastic out of the ocean is more important than ever. Recently, EcoWatch reported on an injured turtle with a plastic straw stuck in its nose, as well as a whale choking on a plastic bag.

The 5 Gyres Institute sailed 3,000 miles in June and sampled the sea surface along the entire voyage for plastic pollution. The (unsurprising) findings? Microplastics are everywhere. One particular sample from the south of Manhattan was the most polluted of all: nearly 500 bits of plastic filled their tiny net in a single hour, the organization discovered.

If you want to reduce your plastic footprint, check out this article on “22 Facts About Plastic Pollution and 10 Things You Can Do About It.”

Fast Fashion Is the Second Dirtiest Industry in the World, Next to Big Oil