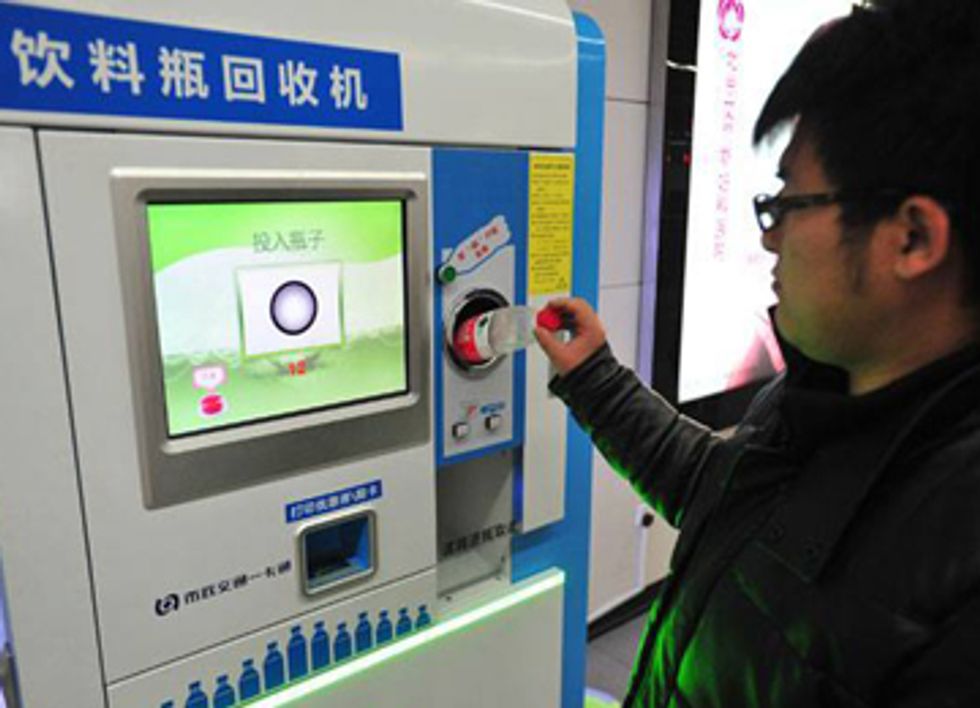 Remember in the opening scenes of Back To The Future: Part II when Doc Brown frantically rummages through a couple of garbage cans for fuel? When the film was released in 1989, the idea of using biodegradable materials as fuel for vehicles was entertaining but wildly science fiction. And while scientists still haven't made available the means to convert everyday garbage into a reusable fuel source, steps have been taken in the fight to reduce carbon footprints and environmental impacts in societies around the world.

For instance, China—which has experienced widespread legacy pollution—recently debuted recycling-for-payment programs in busy subway stations in Beijing. The initiative saw the installation of recycling machines which accept plastic bottles as payment. Passengers receive credit ranging from 5 to 15 cents per bottle, which are then applied toward rechargeable subway cards. The first of the machines officially opened for use in Shaoyaoju station, Beijing in December 2012.

According to a report from The Guardian, more than 100 machines will be put in place in the coming years. Incom, a state-owned resources recovery company, is responsible for the implementation of the machines. Incom currently undertakes processing tens of thousands of plastic bottles every year and hopes the new machines will help reduce the amount of refuse discarded on streets and in public areas.

According to GreenGeeks, one recycled plastic bottle produces enough energy to power a 60-watt light bulb for several hours. However, dissenters of the program still wonder if the machines themselves won't increase environmental degradation with the amount of energy necessary to operate them citing that the process to melt down and reconstitute plastics requires energy and may degrade the quality of the recycled product.

Rather than having to implement and organize costly task forces to retrieve discarded garbage, China hopes to limit federal spending on resources recovery by collecting plastic bottles directly from citizens with the use of the subway recycling machines. To lend perspective, a figure shown by Clean Air Council states that California spends roughly $25 million transporting plastic bags to dumps and an additional $8.5 million collecting these plastic bags from the streets annually.

Eventually, Incom would like to see the recycling-for-payment machines installed along every subway line as well as bus stops and other public means of transportation, such as parking spots in commercial and residential areas.