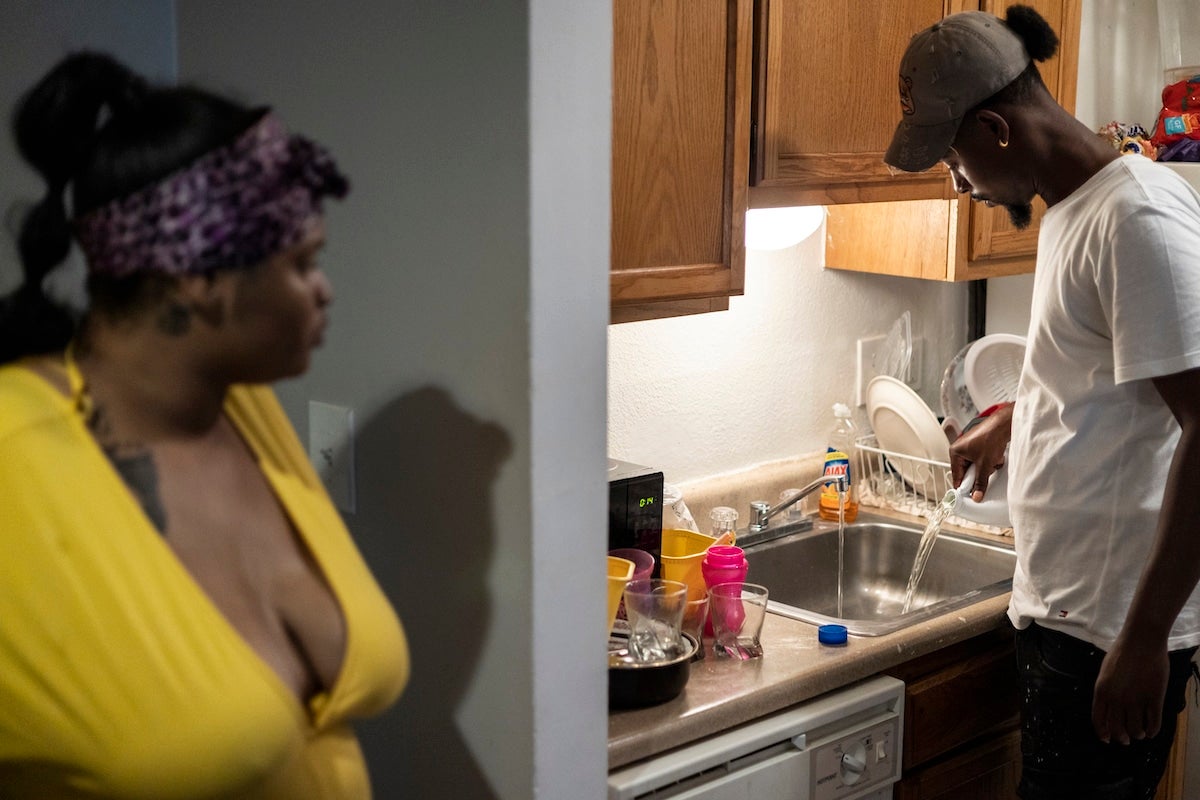 A couple with unsafe drinking water in Jackson, Mississippi adds bleach to their water before washing dishes on Sept. 1, 2022. Brad Vest / Getty Images

The NAACP has filed a federal complaint with the U.S. Environmental Protection Agency (EPA) alleging violations of Title VI of the Civil Rights Act of 1964 and accusing the State of Mississippi of “gross mishandling” of the Jackson water crisis, a press release from the NAACP said. The complaint cited an extensive history of neglect and refusal to provide federal funding that amounted to racial discrimination.

Residents of Jackson — more than 80 percent of whom are Black and a quarter of whom live in poverty — did not have access to drinking water for more than a month starting in late August.

“Everyone deserves safe, clean drinking water. In 2022, there is no excuse as to why our government cannot provide the necessary infrastructure to ensure that all of its residents have access to this basic human right,” said NAACP President and CEO Derrick Johnson in the press release. “The residents of Jackson, Mississippi, a predominantly Black community, have suffered at the hands of discriminatory state leadership for far too long. It is apparent that the racist funding policies of Governor Tate Reeves and the State of Mississippi prevented the execution of critical infrastructure updates necessary to avoid the crisis we are now facing.”

The EPA has 25 days in which to decide whether or not to conduct an investigation, The Guardian reported.

The City of Jackson has only received federal funds to address the issue of safe drinking water three times in the past 25 years, while having given 750 boil water notices to their residents since 2016. About 40 percent of those notices were in the past two years.

“[T]he [Mississippi State Department of Health] and [Mississippi Department of Environmental Quality] both received funds from the EPA to provide safe drinking water and wastewater, and were aware of Jackson’s severe needs, but distributed to the city only a small fraction and disproportionately low amount,” the complaint says, as reported by the Mississippi Free Press.

“Meanwhile, the State has funneled funds to majority-white areas in Mississippi despite their less acute needs,” the complaint said.

A federal class-action lawsuit was also filed by a group of Jackson residents last week requesting monetary damages for neglect by an engineering firm and former city and state officials, reported The Guardian.

“While the boil advisory may have been lifted, the threat of water insecurity continues to loom over Jackson. Governor Reeves and the State of Mississippi have placed thousands of lives at risk and created a crisis that will impact the Black community in Jackson for decades and generations to come. The NAACP will continue to push forward in the fight to ensure that justice is served, these inequities are addressed, and the people of Jackson receive the clean drinking water they deserve,” Johnson said in the press release.

Part of the reason Jackson is dependent on federal funding is because many white residents left the area after the integration of public schools, leaving the city with a diminishing tax base, The Guardian reported. The state is in charge of how to allocate the funding.

“The water crisis in Jackson is just the latest example of negligence — if not racist — pattern of underfunding basic water services for Black communities. Make no mistake — this is nothing new. Our country has a longstanding history of mistreating, and neglecting Black communities, putting the lives of men, women, and children at risk. As our infrastructure continues to age and the effects of climate change worsen, we will continue to experience crises such as the one in Jackson, not only in Mississippi but in predominantly Black communities throughout the country,” said NAACP’s Director of Environmental and Climate Justice Abre’ Conner in the press release.

‘Beat the Heat’: UN Challenges Cities to Add Nature-Based Solutions to Climate Crisis
If you’ve ever sweated through an urban heat wave, it
By Olivia Rosane
EPA Announces $1.34 Million Settlement With Solar Companies Accused of Violating Clean Water Act
While renewable energy is much greener than the fossil-fueled alternative,
By Olivia Rosane
Chicago Entrepreneur Uses Clean Energy to Create Opportunities in Disinvested Communities
By Audrey Henderson
By Energy News Network