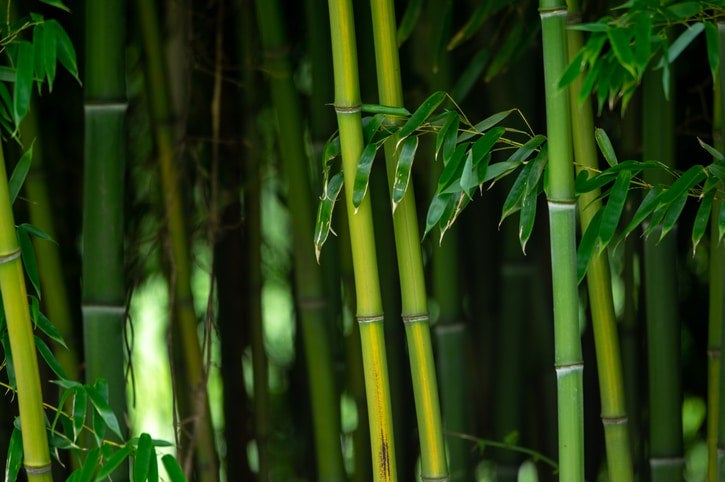 Despite their name, invasive species can be deceptively cute, stunning, or fragrant, inspiring people to introduce them to non-native habitats. But the issue is that some species are moved to a new area, either on purpose or by mistake, and are met with a lack of natural predators, allowing them to crowd out native species.

You’ve probably seen invasive species all over the news, from animals found in an illegal zoo to bans on popular pets that are actually invasive. But there’s an ongoing crisis when it comes to invasive plants, too.

Before you head for the garden center to outfit your backyard, make sure to watch out for these top invasive plant species found in the U.S.

Although this fast-growing plant is invasive, some innovators are using it in creative and productive ways to reduce deforestation of trees for construction, sequester carbon, and improve soil health.

While it may look whimsical and charming, English ivy has been a major problem since it arrived in America in the 1700s. This creeping plant is often planted as ground cover or as vines, and it has spread quickly because it can tolerate a wide range of growing conditions. It can spread via birds to forests, where it kills off trees by preventing light from reaching the tree’s leaves.

Fortunately, homeowners who love the look of English ivy can plant native species like creeping mint or creeping phlox for a similar look without the environmental destruction.

You’re probably already familiar with Callery pear trees — these are the trees that sprout beautiful white flowers in the spring but smell much like rotting fish when a breeze comes through. Native to Vietnam and China, these trees, also called Bradford pear trees, these trees became popular as a low-cost landscaping option, but they spread aggressively.

The species has become such an issue that some states are beginning to ban Callery pear trees. Pennsylvania has already started phasing them out, and Ohio is set to begin banning the sales or planting of these trees starting in 2023. South Carolina will begin banning sales of this species in 2024.

Another pretty and popular plant, Wisteria sinensis is invasive in much of the country, especially in the eastern half of the country. The plant’s vines wrap around trees and cut through the bark, causing native trees to die off. It was first introduced to the U.S. in 1916 to serve as an ornamental plant, and it is still widely planted today.

If you just can’t get enough of those purple blooms, there are other wisteria options native to the U.S. Just keep a close eye on them, because they can still grow rapidly. Wisteria frutescens or Wisteria macrostachya work best for gardeners in the eastern U.S. These native alternatives are similar to Wisteria sinensis as vines with pretty purple flowers.

You can find cogongrass at many nurseries, but don’t buy it! This species is one of the most invasive weeds globally, according to the USDA. It first arrived to the southern U.S. by accident as a packing material in either 1911 or 1912. Then, cogongrass was brought to Florida to be used for erosion control. But the weeds grow densely, crowding out native species.

As recent as March 2022, the USDA put out a warning to residents of Alabama to watch out for cogongrass, and the weed reached a new location, Arkansas, in 2021, a sign it is still spreading.

The perennial purple loosestrife grows in moist environments, but it has become detrimental to wetlands, marshes, river banks and other areas with wet soil. But it doesn’t stop there. Purple loosestrife will also tolerate dry soil, allowing it to aggressively take over just about any environment it is introduced to. It was once used as an herbal remedy, but it has now spread to all of the U.S. except for Florida and Hawaii as well as into Canada.

Recently, experts have turned to two types of weevils and two types of leaf beetles to help control the spread of purple loosestrife around the U.S.

Lonicera japonica, also known as Japanese honeysuckle, is a climbing vine. Unlike those stinky ol’ Bradford pear trees, this species has a lovely scent, making it even more appealing to landscapers. But it grows rapidly, choking out other plants as it grows over and around them. It is commonly used as a fragrant ornamental plant.

Euonymus alatus, not to be confused with the non-invasive Euonymus Alatus Compacta, is aptly called the winged burning bush for its bright-red, can’t-miss-them leaves and seeds. Like many other invasive species on this list, it was introduced as an ornamental plant for landscaping but quickly took over its new environments. It now stretches along much of the East Coast, into the Gulf Coast as well as in Illinois.

Aside from the similar but non-invasive Euonymus alatus, the Euonymus americana, or simply the American strawberry bush, is a pretty alternative that is native to the eastern U.S.

Popular for providing shade in yards, the Norway maple’s history in the U.S. dates back to 1756. In addition to taking resources from native trees, this maple tree also blocks light from wildflowers and will even compete for resources with conventional lawns.

Fortunately, there are so many other alternatives to the Norway maple to plant instead. If you’re hoping for the cooling shade of a maple tree, consider sugar, red, black, mountain, striped, chalk, or canyon maples instead. There’s a maple for just about any environment around the U.S., from mountainous regions to coastal areas to the Midwest.

Berberis thunbergii, also called Japanese barberry, is often found in natural areas, like forests, meadows and wetlands, despite first being introduced as an ornamental plant. Deer tend to prefer eating native plants, allowing the Japanese barberry to grow with little predation. In addition to crowding out native plants, this species can even change soil pH in some locations, particularly New Jersey.

What to Do When You Spot an Invasive Species

Saving Mother Earth: New Books About Feminism and Women Protecting the Planet
By John R. Platt
By The Revelator
Coyotes Are Here to Stay in North American Cities – Here’s How to Appreciate Them From a Distance
By David Drake, Bret Shaw, and Mary Magnuson
By The Conversation
New Postage Stamps Celebrate 50th Anniversary of National Marine Sanctuaries System, Biodiversity
The National Marine Sanctuary System was established on Oct. 23,
By Tiffany Duong