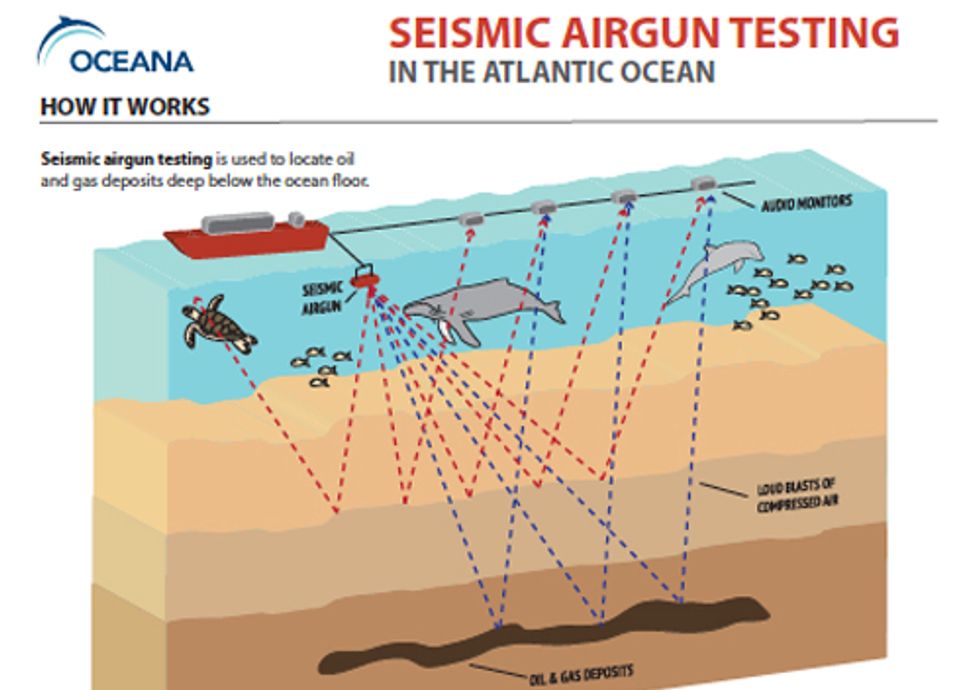 Today, 22 organizations—from fishermen to ocean advocates and marine scientists, including Clean Ocean Action, Oceana and Surfrider Foundation—sent a letter to Secretary Salazar at the Department of the Interior (DOI) requesting that proposed seismic airgun testing in the Atlantic Ocean be cancelled in wake of superstorm Sandy.

On March 30, the DOI announced that the Bureau of Ocean Energy Management (BOEM) had prepared a Draft Programmatic Environmental Impact Statement (PEIS) to evaluate potential environmental effects of a decade-long seismic and geophysical survey program for the Mid- and South Atlantic Outer-Continental Shelf (OCS) planning areas.

A decision is expected soon from DOI as to which “alternative” will be chosen as preferred. At public hearings held in a few towns and cities this past summer, community, environmental, fishing, faith-based and public interest organizations and businesses called for a “no-action alternative” which would close the door to Atlantic Ocean oil and gas surveys.

From Florida to Maine, the Atlantic coast is in a state of emergency as communities and economies dig out from under the debris generated by Hurricane Sandy. Along many parts of the Atlantic coast, recovery is just getting underway and rebuilding is only distantly on the horizon. Cumulatively, Hurricanes Sandy, Lee, Irene and others, along with nor’easters and other recent extreme weather events have battered the most densely populated parts of the U.S. coastline. The industries and economies upon which many of these coastal states rely are facing a long road of recovery ahead.

“With declared fisheries disasters in New York and New Jersey, entire townships and clean coastal economies in tatters, and uncounted homeless families, it is unthinkable that the federal government would further burden our marine environment with proposed Atlantic Ocean oil and gas activities,” said Cindy Zipf, executive director of Clean Ocean Action. “Big Oil had no place in the Atlantic Ocean before this disaster, and the impacts from seismic testing would add unthinkable insult to injury,” Zipf continued.

“Seismic airguns could injure 138,500 whales and dolphins, according to government estimates, and that’s unacceptable,” said Jacqueline Savitz, deputy vice president for U.S. campaigns at Oceana. “The true impacts are likely much higher due to faulty assumptions in the government’s study. Seismic airguns must be stopped to save marine life, and at the very least, the flawed science used to assess these impacts must be revised prior to deciding on next steps."

“Our coastal communities depend on a healthy ocean for industries such as tourism, recreation, and fishing,” said Pete Stauffer, ocean program manager for the Surfrider Foundation. “Allowing seismic exploration off our coast would cause major impacts to the marine ecosystem, and produce more economic hardship at a time we can least afford it.”