How a Solar-Powered Water Wheel Can Clean 50,000 Pounds of Trash Per Day From Baltimore's Inner Harbor 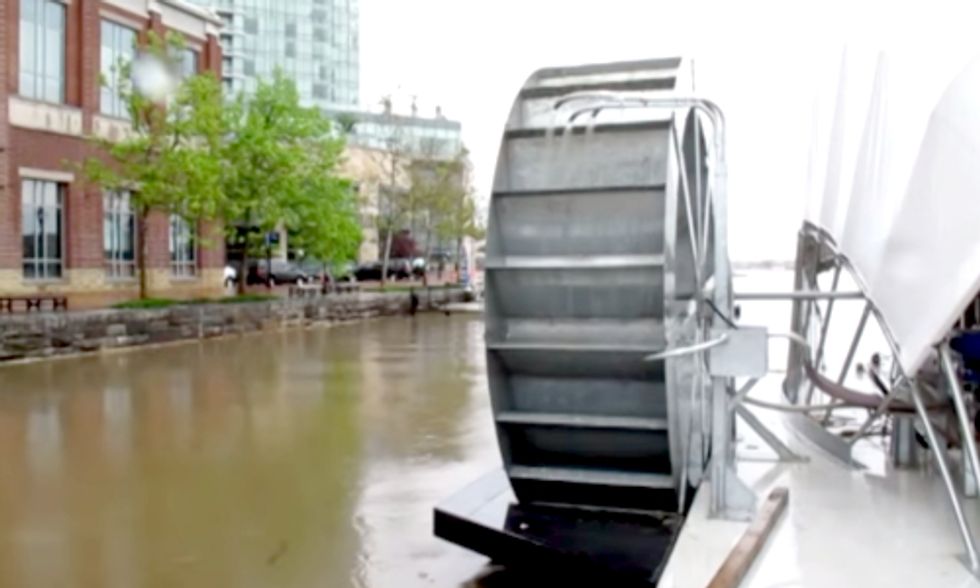 A large wheel has been strolling the Baltimore Inner Harbor the past month, doing its best to clean the trash that has littered a city landmark and tourist attraction.

It's called the Inner Harbor Water Wheel, and though it moves slow, it has the capability to collect 50,000 pounds of trash. The timing for John Kellett's solar-powered creation is crucial—hands and crab nets simply can't keep up with the growing amount of wrappers, cigarette butts, bottles and other debris carried from storm drains into the harbor.

"It looks sort of like a cross between a spaceship and a covered wagon and an old mill," says Kellett told NPR. "It's pretty unique in its look, but it's also doing a really good job getting this trash out of the water."

The wheel has become an integral part of the Healthy Harbor Waterfront Partnership Initiative. It receives power from the Jones Falls river's current near the harbor, which turns the wheel and lifts trash from the water into a dumpster barge. A solar panel array keeps it running when there water current isn't enough.

The wheel is now docked to the harbor. Each it runs, it removes an impressive amount of debris. So far, it has never collected less than eight cubic yards of trash.

Healthy Harbor hopes to make the body of water swimmable in less than six years, and the Water Wheel could be a big part of that.

"The water wheel has been a time-saver for us," said Bill Flohr, who runs Baltimore Harbor's East Marina. "It seems to be collecting probably 95 percent of what we normally had to pick up by hand."