The best of EcoWatch, right in your inbox. Sign up for our email newsletter!
plastics 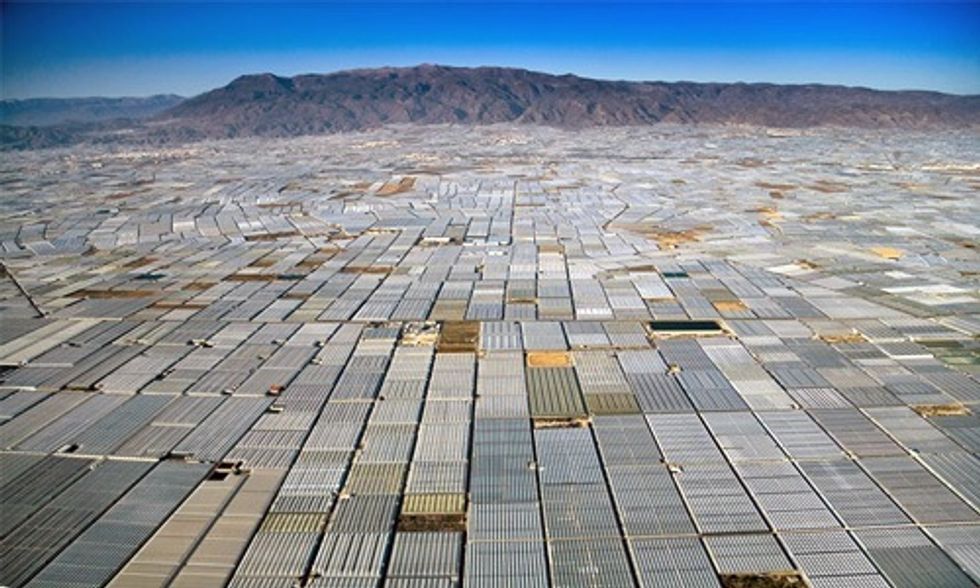 It seemed like a wonderful idea—driving the Spanish coast from Barcelona all the way down to the Straits of Gibraltar. We got there in April, right before tourist season, and happily missed much of the vacationing European onslaught. Our goal was to hit the smaller less-touristy beach towns to do some diving, paddleboarding and beachcombing along the Mediterranean Coast.

South of Barcelona, we stayed in L'Ampolla and enjoyed near-deserted beaches, hotels and restaurants. Next stop was Altea—absolutely beautiful, also with few tourists, and with that amazing wall of mountains as the backdrop, the Sierra de Bernia. Further along the coast, the water was the most curious blue I'd seen in El Portus, and had the wind and surf not been pounding, it would have been a great place to paddleboard and sea kayak.

Standup paddleboarding near the waterfall of Nerja, Spain.

But it was just south of El Portus, after the city of Mazarron along E-15 where we started seeing the first few greenhouses.

I was there with Catherine Ebeling—bestselling author of diet and health books—and I am an environmental activist, and so for the two of us, the idea of greenhouses seemed quaint and healthy, at first. It was like: “Look at that, greenhouses, what a great way to create sustainability and locally grown food." But as we motored along E-15—through the desert valley and then finally into the cities in and around Campo Hermoso—the landscape changed dramatically. It went from a view of the beautiful azure Mediterranean Sea with gently sloping hills and mountains, to patches of white plastic here and there, expanding to greater and greater expanses of white plastic, until it became almost solid white plastic covering the landscape as far as the eye could see, blotting out everything.

They call it a “Sea of Plastic" and the “vast expanse of polytunnels." The further we drove, nearer and through Almeria into the city of El Ejido, I started thinking of it as the apocalypse. But the visual onslaught is the least of the problem—news articles have reported on the issues with the greenhouses many times, environmental groups have tried to address the problem and governments have launched efforts to mitigate it.

Greenhouses cover every square inch of land, more than 165 square miles of land around Almeria, Spain.

As we drove along, the smell of plastic and chemicals permeated the car and offered the first scent of the larger environmental problem. The greenhouses are almost all hydroponic—growing vegetables in water, air and a chemical stew of fertilizer, herbicide and pesticide. Due to the hot and extremely difficult working conditions inside the greenhouses, almost all of the human labor is imported, much of it slave-like from Africa.

The growth in greenhouses started in the late 1970s as a local response to an economic opportunity to provide vegetables to the European marketplace. The transformed landscape has also transformed the economy from a land of farmers struggling in dry rocky soil in the 1970s to an economy of extremely wealthy greenhouse owners. By 2004, thousands of small landowners had turned their entire property—every square inch—into greenhouse farms as the vegetables started appearing in grocery stores and restaurants across the European continent, especially in the UK and also in Paris. In the 2000s, immigrants from Africa—many with no legal papers—were shipped in by the hundreds per boatload to work in the plastic greenhouses.

They call it a "Sea of Plastic" and a "Vast Expanse of Polytunnels."

By 2011, a news report in The Guardian said that more than 100,000 workers toil away inside the greenhouses, many living in “inhuman" slums and laboring in the chemical stew. The report noted:

A 2013 documentary film, The Morrocan Slaves of El Ejido, Spain (Esclave marocain a El Ejido, Espagne), chronicled the plight of the migrant workers toiling inside the hot greenhouses as well as their difficult lives outside of work.

In 2014, amidst a large controversy, a Spanish TV station created a fictional crime drama, Plastic Sea (Mar de Plastico), that highlighted much of the crime, labor and environmental chaos surrounding the greenhouse farms.

A 2015 report in NaturPhilosophie noted that, in addition to the massive human rights problems, the area is plagued with depleted aquifers, the largest desalination plant in Europe to keep water flowing into the greenhouses, and rising cancer rates due to pesticide exposure among workers.

Waste from the “farms" is reported to run off into the Mediterranean Sea, including the chemical waste, plastic waste and human waste of the workers. Entire industries have popped up in the area simply to make the massive amount of plastic for the greenhouses which has a short lifespan and is sometimes discarded, strewn across the landscape or washed into the sea.

Some observers call it a $1 billion “miracle economy," while others call it the “exploitation of cheap labor with no rights" and “environmental devastation." The swath of greenhouses is massive enough to be seen from space and has been described as a “Dystopian Sea."

The area is so large that it actually creates its own “albedo effect" because it reflects the sun's rays and cools the atmosphere. Scientists claim that local temperatures have actually decreased by 1 degree since 1980, while other areas of Spain have increased by 1 to 3 degrees over the same time period.

All of the negative publicity has caused the greenhouse corporations, as well as the local governments, to combat the tide of news stories with greenwashed news releases (like this video) that, among other things, even brag about the albedo effect by saying that the greenhouses serve a public good by cooling the climate on the Southern Iberian Peninsula. The controversy continues to escalate month-by-month as the number of greenhouses increase and stretch farther and farther up and down the coastline.

As we drove through and beyond El Ejido, the greenhouses continued to stretch along the road in La Rabita and Carchuna. Finally, in the tourist area of Nerja, we could see no more greenhouses—from the road at least—and a sense of relief set in. The drive was very unsettling, causing a tightness in our chests and cringe on our faces—the continual glare of the white and the smell of plastic and chemicals gave us headaches that we tried to wash away with long gulps of bottled water.

As we dined that evening in Nerja, we ordered a salad the same as we had in restaurants all across southern Europe. The romaine lettuce, bell peppers, tomatoes, cucumbers and carrots took on an all new look and flavor now colored by our education about the source of the food. The waitress proudly exclaimed that the salad was “locally grown."

The next morning we rented standup paddleboards and paddled along the cliffs just north of Nerja. The Mediterranean Sea was quiet and crystalline clear. A few hundred yards north of Nerja we paddled under a beautiful waterfall careening over the cliff above and splashing into the Sea. The fresh water felt wonderful washing over my head, clearing the dystopian sea of plastic from my brain.

But then we paddled a few hundred yards farther south and saw greenhouses perched on the cliffs above and stretching intermittently along the coast. It seemed like the greenhouses were everywhere. When I got back to our hotel that night I looked on Google Earth, and indeed, the stream from the waterfall ran right through acres of greenhouses up on the cliffs that we couldn't see from the water below. Was that lovely waterfall actually a toxic stream of runoff from the plastic greenhouses?

NaturPhilosophie reports that tens of millions of acres of land across the planet are now covered by plastic greenhouses or plastic mulch directly on top of ground. Eighty five percent of those greenhouses are in Asia. The future presented by the greenhouses of Almeria, Spain, is not a clean eco-tech environment like in the Biosphere project in the desert of Arizona that Americans are familiar with. Conversely, it's an environmental dystopia filled with slave-like labor, chemical-laden food and intense heat. Is this the new wave of farming? An apocalyptic world covered by plastic may await us.

Gary Wockner, PhD, is an international environmental writer and activist based in Colorado. Contact: [email protected].