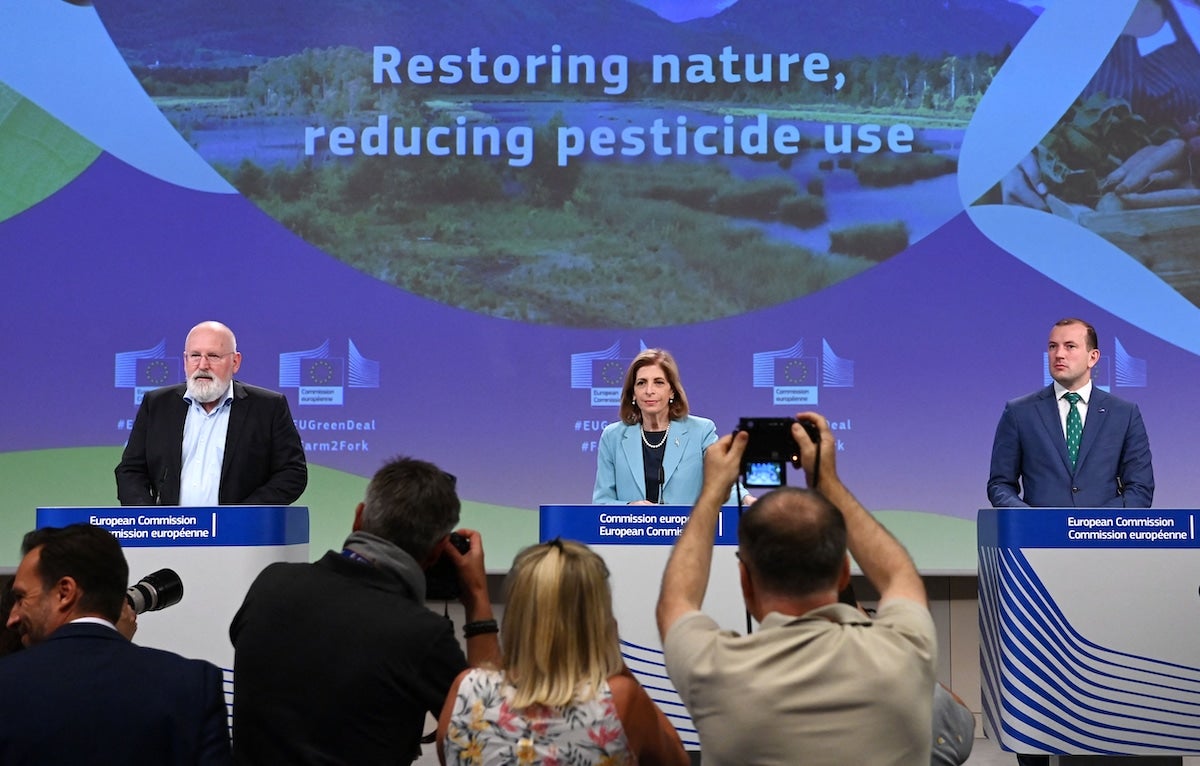 The European Commission has proposed a new law that would cut pesticide use in half by 2030 and completely ban the use of these chemicals near schools, playgrounds and hospitals. The proposal is part of a larger set of goals to reverse biodiversity loss and restore 20% of land and seas by the end of the decade.

According to the Pesticide Action Network of Europe, nearly 350,000 metric tons of pesticides were sold in Europe in 2019, primarily for agriculture. A 2017 report from the European Commission noted that pesticides cause pollution that directly impacts biodiversity and ecosystems.

“We need to reduce the use of chemical pesticides to protect our soil, air and food, and ultimately the health of our citizens,” said Stella Kyriakides, commissioner for health and food safety, as reported by The Guardian. “This is not about banning pesticides. This is about making them a last resort measure.”

The plan could take about one year to become official legislation and would be the first law regarding biodiversity since 1992. Once law, members of the EU will have an allotted time of two years to create plans to meet legislation targets that they must meet or face legal action.

“It’s a huge milestone. It really has the potential to turn around our relationship with nature,” said Ariel Brunner from BirdLife Europe. “Ultimately, the difference between effective policy and just propaganda is whether you can take people to court for failing to do what they have to.”

But Brunner noted the BirdLife Europe team plans to closely review the proposals’ text for loopholes, which were advocated for by agriculture and forestry lobbies.

The proposals have environmental targets for a variety of ecosystems, including farmlands, urban areas, bodies of water and forests. For urban areas, there can be no net loss of green space or tree canopy cover by 2030 and a net gain of 10% of tree canopy cover by 2050. In rivers, members of the EU will need to work on restoring the waters by removing dams, while marine areas will require fishing spots to close down. In forests, member states need to improve connectivity.

“Setting concrete targets and securing strong national implementation tools can turn the tide in the fight against these twin crises, but only if they are enforced,” said Ioannis Agapakis, wildlife and habitats lawyer at ClientEarth. “For this law to have teeth, we need to see monitoring, detailed planning and rules for the types of measures adopted to fulfill the law’s targets — otherwise they will remain just numbers on a page.”

Scientists Can Now Track Agricultural Sulfur Runoff for More Sustainable Wine
As we strive for a more environmentally conscientious world, everything
By Cristen Hemingway Jaynes
Woman Gored by Bison at Yellowstone National Park in Third Incident This Year
One of the biggest attractions of Yellowstone National Park, which
By Cristen Hemingway Jaynes
Supreme Court Restricts EPA’s Ability to Fight Climate Crisis
The Supreme Court has restricted the ability of the U.S.
By Olivia Rosane