David Suzuki: We Have to Stop Killing Our Oceans With Plastic 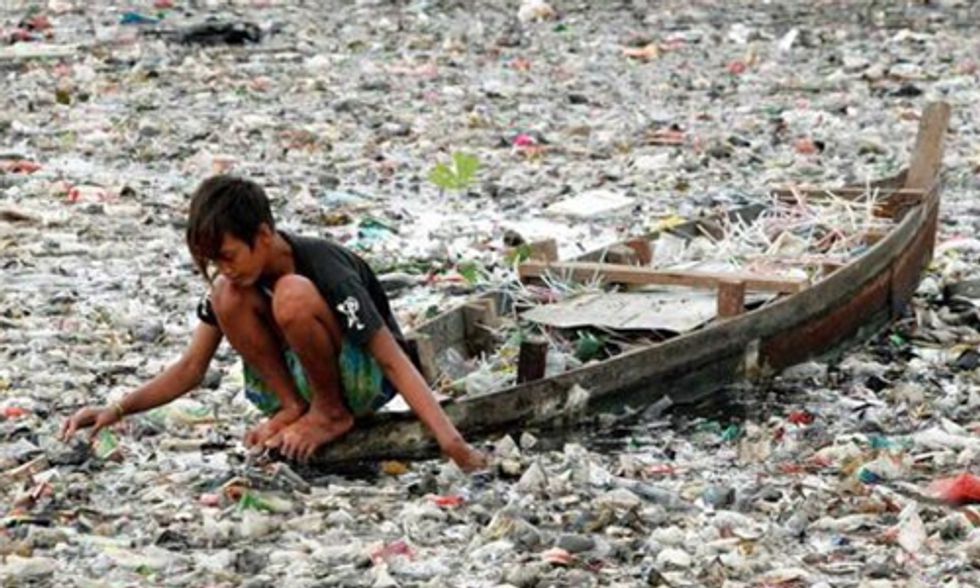 Eight million tonnes. That’s how much plastic we’re tossing into the oceans every year! University of Georgia environmental engineer Jenna Jambeck says it’s enough to line up five grocery bags of trash on every foot of coastline in the world.

A study published by Jambeck and colleagues in the journal Science on Feb. 12 examined how 192 coastal countries disposed of plastic waste in 2010. The report, Plastic waste inputs from land into the ocean, estimates that of 275 million tonnes of plastic generated, about eight million (based on a midpoint estimate of 4.8 million to 12.7 million tonnes) ends up in the seas—blown from garbage dumps into rivers and estuaries, discarded on beaches or along coastlines and carried to the oceans.

Plastic is everywhere in our seas. It accumulates on the sea floor and in sediments, washes up on coastlines and is taken up by fish and other sea creatures.

Scientists don’t know where most plastic ends up or what overall effect it’s having on marine life and food supplies. They do know that massive islands of plastic and other waste—some as large as Saskatchewan—swirl in five gyres in the north and south Pacific, north and south Atlantic and Indian oceans. But that’s only a small amount of the total.

Plastic is everywhere in our seas. It accumulates on the sea floor and in sediments, washes up on coastlines and is taken up by fish and other sea creatures. It affects birds, fish, mammals and other marine life. It eventually breaks down into smaller bits, which can look like fish eggs and get eaten by marine animals, but it never biodegrades. Those particles, or microplastics, just keep building up. They also absorb and concentrate toxic chemicals, poisoning the animals that consume them. Studies show that 44 percent of all seabird species have plastic in and around their bodies, and fish, birds, turtles and whales often become fatally entangled in plastic waste.

Even the search for Malaysia Airlines Flight 370, which went down over the South China Sea in March 2014, was confounded when investigators looking for crash evidence kept finding plastic debris.

Humans depend on healthy oceans for food, water, air, recreation and transportation. Oceans contain more than 97 percent of the planet’s water and produce more than half the oxygen we breathe. They also absorb carbon—important to reducing global warming. Half the world’s people live in coastal zones, and ocean-based businesses contribute more than $500 billion a year to the global economy.

What we do to the oceans and the life therein, we do to ourselves. So what can we do to keep them—and us—healthy?

The report’s authors say reducing “mismanaged” plastic waste, regulating the amount of plastics that enter the waste stream and improving waste-disposal methods in the top 20 offending countries are all essential. But, Jambeck notes, “It’s not just about improving the infrastructure in other countries. There are things we can do in our daily lives to reduce the amount of waste plastic we all produce.”

Canada’s relatively good waste-disposal and recycling systems keep us off the 20 worst offenders list—but we can still do better. Reducing the amount of plastic we use is the first step. For consumers, that means avoiding overpackaged goods and unnecessary plastic items, such as bottled water, single-serve K-cup coffee pods and disposable products. We must also get better at reusing and recycling. According to a report by the U.S. non-profit As You Sow, plastic is the fastest-growing form of packaging, and only about 14 percent gets recycled.

Oceans and the life they support face numerous threats, from climate change to overfishing. Reducing the amount of plastic we dump into them is a challenge we can meet. Let’s get on it.