Clean Energy Development: Where Does Your State Rank? 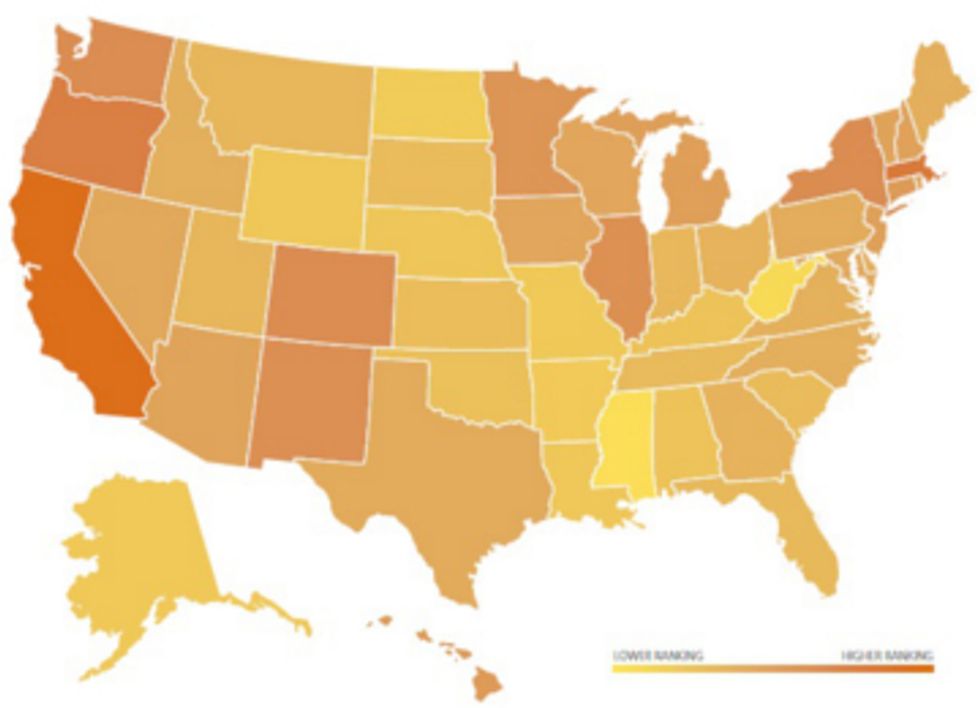 The U.S. Clean Tech Leadership Index released today by the Clean Edge research and advisory firm in partnership with a number of other entities ranks the 50 states according to some 70 indicators covering investment and performance criteria involving all aspects of economic activity, from buildings to transportation. It uses 20 indicators to rank the 50 largest metropolitan areas.

The index provides important new evidence of the extent and benefits of California’s clean energy leadership. “In addition to the state’s top-tier position in almost every measure of sector activity, dominance in high profile areas like electric/hybrid vehicle adoption, smart meter installations, solar power capacity and venture capital makes California the unrivaled leader in the continuing advancement of clean technology,” according to the report.

The analysis found that California is the strong overall leader in clean technology achievement across all the indices, and the seven leading metropolitan areas include five from California: San Francisco at No. 1 and San Jose at No. 2, followed by Los Angeles at No. 4, Sacramento at No. 6 and San Diego at No. 7.

However, California has plenty of competition. The top 10 states include four from the West (Colorado, Oregon, New Mexico and Washington), two from the Northeast (Massachusetts and New York) and two from the Midwest (Illinois and Minnesota). Hawaii breaks into the top 10 for the first time, in part based on its leadership position in solar generation—first in the nation in the percentage of its peak power needs obtained from that source at seven percent.

All this state leadership produced some notable cumulative gains in renewable energy generation. Wind power grew by almost 30 percent and surpassed 60,000 megawatts—to put this in perspective, the entire U.S. nuclear power industry is equivalent to about 100,000 megawatts. Meanwhile, Iowa and South Dakota rival Denmark, the world leader, in the fraction of their electricity produced by wind generation (about a quarter for each). Geothermal power added three times as much generation in 2012 as in the two previous years. Nationwide, solar photovoltaic installations were up by more than 75 percent in a single year.

Although the survey has many competitors, the index is probably the most comprehensive and rigorous national ranking. This year marks the first time Clean Edge has issued a comprehensive public report with state and metro-level scores beyond its subscriber base.

These results demonstrate that a clean energy future is possible and that—with the right policies—any state in any region of the country can lead the way in building it.

Here are the top 10 rankings by state:

Here are the top 10 rankings by metro area: