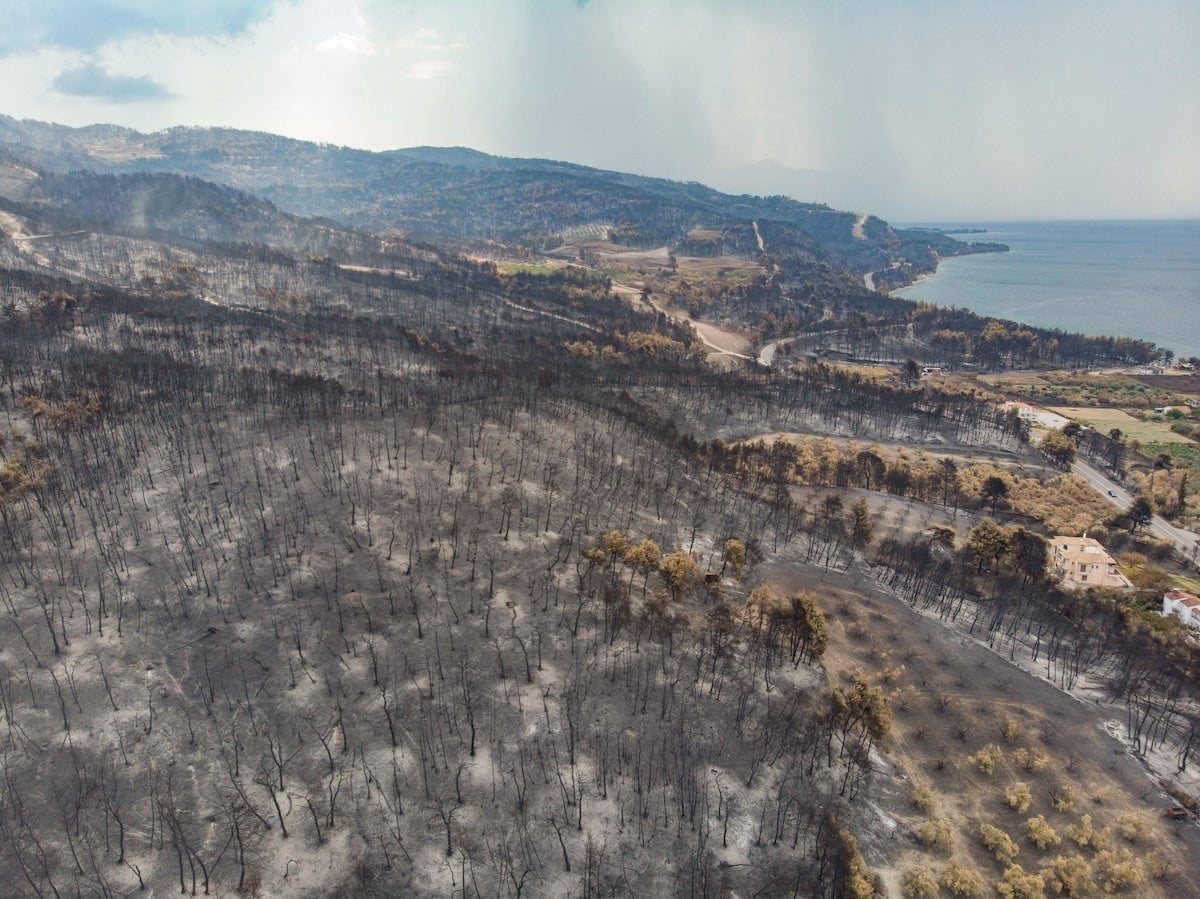 The aftermath of wildfires in Evia island, Greece in August 2021. Nicolas Economou / NurPhoto via Getty Images

Even if global temperatures start to decrease, after peaking this century due to climate change, biodiversity risks are likely to persist for decades, a new study by London’s Global University (UCL) and University of Cape Town researchers finds. The potential impacts on biodiversity were modeled against pre-industrial levels if temperatures increased by more than 2°C (35.6°F), before beginning to fall again.

Climate change and all of its anthropomorphic influences are already facing a biodiversity crisis, with mass dieoffs — such as hundreds of migratory birds falling out of the sky in the Southwest in 2020. Altered reproductive events and species distributions are also among existing ill impacts.

In 2015, the Paris agreement was signed in an attempt to reduce global warming below 2°C. Since greenhouse gas emissions continue to increase, many scientific models now analyze decades-long overshoots of this limit. The effects of potential carbon dioxide removal technology were also factored into this model, targeting the offset of harmful temperature increases by 2100.

A Return to Pre-Overshoot ‘Normal’ Is Uncertain at Best

Researchers studied more than 30,000 species in habitats globally and discovered that for a quarter of the areas examined, the chances of reversing the damage to pre-overshoot “normal” are either nonexistent or uncertain.

“We found that huge numbers of animal species will continue to endure unsafe conditions for decades after the global temperature peak,” said co-author Dr. Alex Pigot (UCL Centre for Biodiversity & Environment Research, UCL Biosciences). “Even if we collectively manage to reverse global warming before species are irreversibly lost from ecosystems, the ecological disruption caused by unsafe temperatures could well persist for an additional half century or more.”

Researchers also looked at the possibility of CO2 emissions continuing to grow until 2040, then dipping after 2070 due to carbon cut efforts and carbon dioxide removal technology deployment. That means for several decades during this century, global temperatures would breach 2°C but fall after 2100. Researchers analyzed how quickly a species in any given location may become exposed to harmful temperatures, how long that would persist, the numbers of species it would affect and whether or not any return to “normal” were possible.

Most Species in Tropical Regions Threatened With Volatile Conditions

For most locations, dangerous temperature exposure will occur suddenly as species are pushed outside their thermal niche limits. Researchers also found that any return to comfortable thermal niches for these species would be gradual, lagging drastically behind global temperature decrease — due to volatile climatic conditions and impacts on ecosystems. The overshoot for biodiversity risks was determined to range from 100 to 130 years, twice longer than the actual temperature overshoot.

Regions facing the most impact include tropical locations for more than 90% of species in the Central Indian Ocean, the Indo-Pacific, Northern Australia and Northern Sub-Saharan Africa, all pushed beyond their thermal niches. In the Amazon, the team found more than half of all species will be exposed to volatile climate conditions. For almost 19% of all locations examined, including the Amazon, uncertainty surrounds the potential of returning to pre-overshoot levels; while 8% of regions may never return to those levels. The globe may likely face irreversible species extinction and ecosystem transformations.

“Our findings are stark,” said co-author Christopher Trisos (African Climate and Development Initiative, University of Cape Town). “They should act as a wake-up call that delaying emissions cuts will mean a temperature overshoot that comes at an astronomical cost to nature and humans that unproven negative emission technologies cannot simply reverse.”

Carbon dioxide removal technologies and nature-based solutions, such as afforestation, are also associated with potential negative impacts, shared lead co-author Dr. Joanne Bentley (African Climate and Development Initiative, University of Cape Town). Dr. Bentley warned that if the 2°C global warming target is overshot, the loss of biodiversity could compromise the ecosystem services humanity relies on for its livelihood. She advised that avoiding temperature overshoot should be the top priority, then limiting the magnitude and duration of any overshoot.

The research was funded by a collaboration between the African Academy of Sciences and the Royal Society. The paper was published in the Philosophical Transactions of the Royal Society B: Biological Sciences.

Tiffany Chaney
Tiffany Chaney is an environmental and wellness writer dedicated to advocacy, ethics, and transparency. Chaney holds a BA in creative writing from Salem College and completed an apprenticeship in western herbalism and Traditional Chinese Medicine at the Tree of Life Wellness Center and Piedmont Herb School in Winston-Salem, NC. She is also a published creative writer and artist.