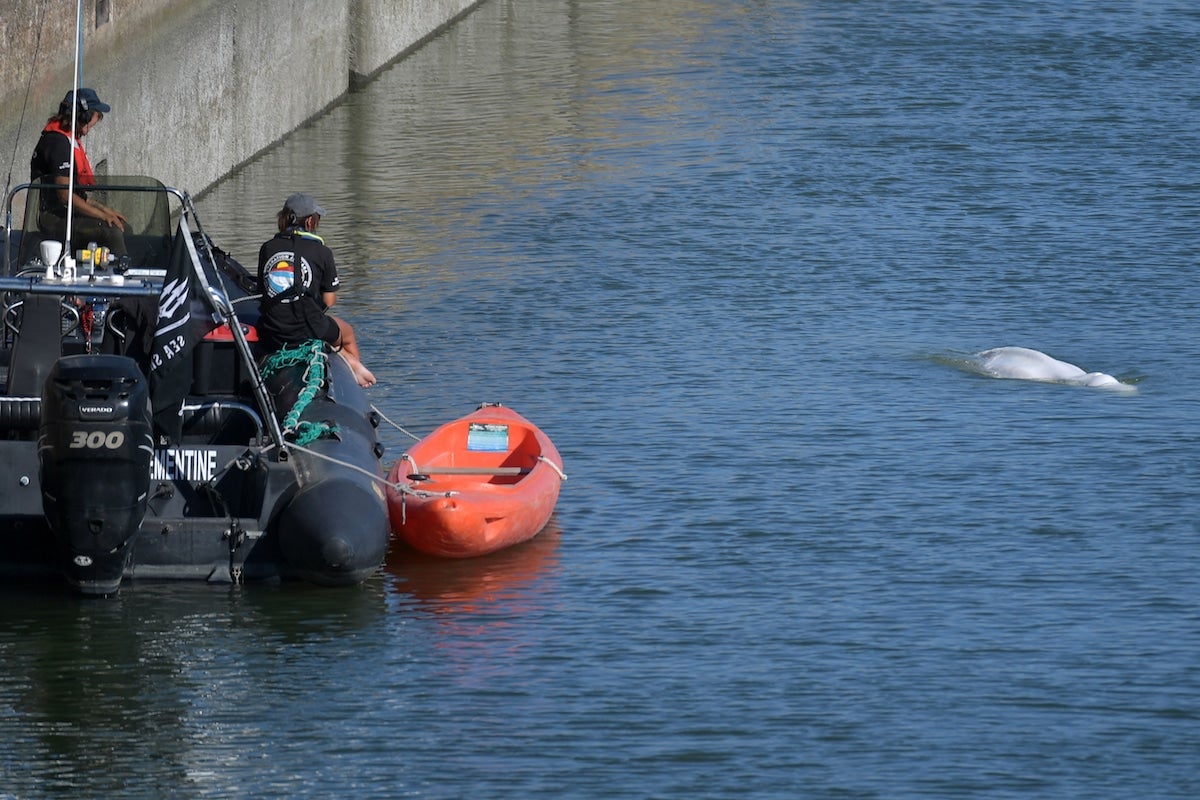 Experts in France are trying to find a way to quickly save a beluga whale that is starving and stuck in the Seine River. Feeding attempts have been largely unsuccessful but will continue alongside efforts to move the whale out of the river into a saltwater river basin near the sea for monitoring.

Beluga whales live in the Arctic Ocean in much colder waters. But this whale was first found in the Seine last week in the river portion between Paris and Rouen. The whale has so far refused to eat, despite being offered a variety of food such as live trout, squid, and dead herrings.

Veterinarians have also tended to the whale, giving it vitamins and other products in hopes of stimulating its appetite and improving its health.

“The beluga still doesn’t eat but continues to show curiosity,” marine conservation organization Sea Shepherd France tweeted, as reported by Associated Press. With the beluga alert and still moving in the waters, euthenasia has been ruled out so far. But staying in these warm waters for too long put the whale in danger. The whale is also at a high risk of starving to death in the river.

In a new statement released from Sea Shepherd France, the organization explained that aside from being 150 kilometers from the estuary, the whale is moving closer toward Paris rather than the sea and is extremely thin and weak from a lack of food. Moving it would be extremely stressful, leaving the animal’s life at risk. Putting the whale to sleep temporarily for relocation could also kill it, as Sea Shepherd France explained this animal has conscious breathing.

The organization also noted that it consulted with beluga whale experts who examined footage of the animal in the Seine and explained it was still premature to euthanize it.

According to the World Wildlife Fund (WWF), beluga whales are social creatures that are near threatened. The National Oceanic and Atmospheric Administration (NOAA) explained that these whales face many threats, including pollution, habitat degradation, interactions with fisheries or oil and gas drilling operations, and other human activities.

Today, Sea Shepherd France reported one final effort to save the whale will be made. The plan is to carefully move the whale to a saltwater river basin near the sea, as Reuters reported. Medical treatments have slightly helped the whale’s health, making relocation more feasible.

“Moving it to a salt water pool will allow us to monitor it better and try and treat it,” Lamya Essemlali, president of Sea Shepherd France, told Reuters. “That’s what really matters: determine if it can be cured from what it is suffering from. It’s a necessary step before releasing it into the sea.”

Deep Seabed Mining Plans Pit Renewable Energy Demand Against Ocean Life in a Largely Unexplored Frontier
By Scott Shackelford, Christiana Ochoa, David Bosco and Kerry Krutilla
By The Conversation
Designing a U.S. Transit System With Smaller, Fewer Cars Could Cut Lithium Demand and Mining Harms of EV Transition
One of the less sustainable aspects of the drive to
By Olivia Rosane
Scientists Develop 'Cyborg Cells' That Could Improve Environmental and Human Health
With the ability to act as living cells, minus the
By Paige Bennett