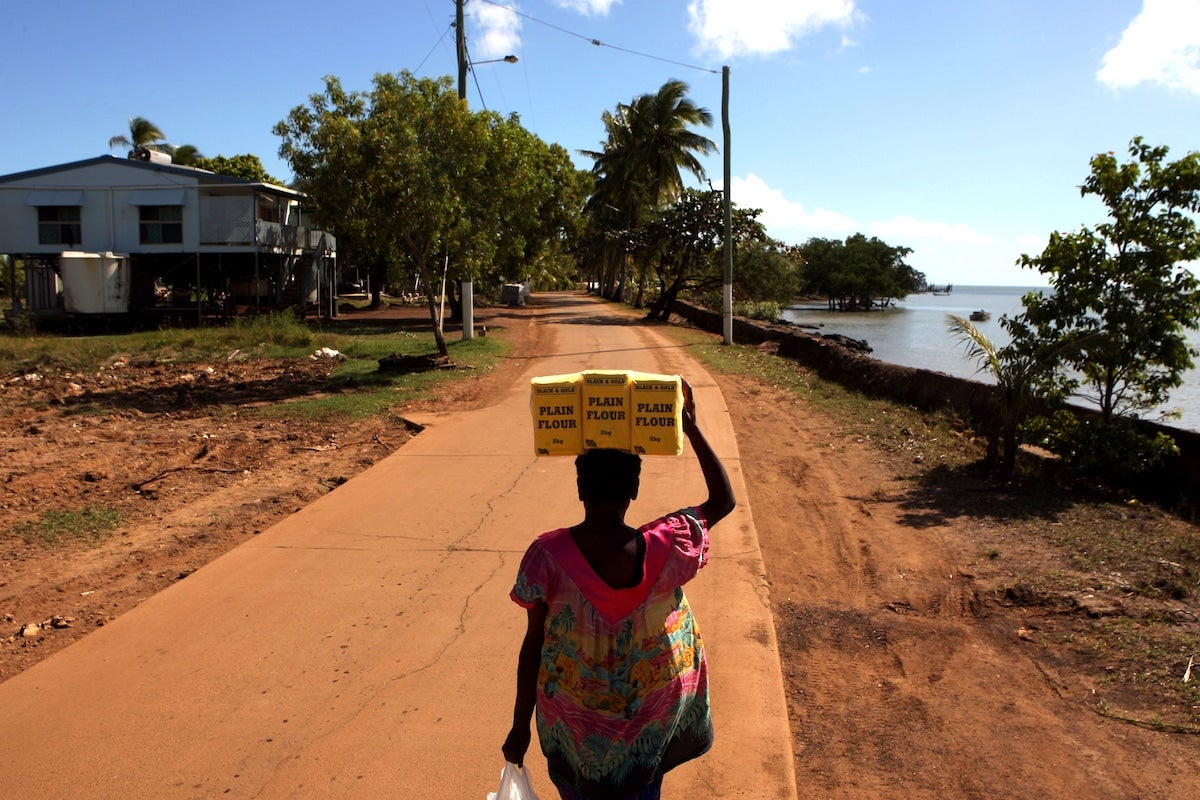 A woman carries flour past a damaged sea wall on Saibai Island in the Torres Strait. ANDREW MEARES / Fairfax Media via Getty Images

In a landmark ruling, the United Nations (UN) Human Rights Committee has found that the Australian government failed to take timely and adequate measures to protect Indigenous Torres Strait Islanders against the adverse impacts of climate change and, by doing so, violated their rights.

The Committee found the government had “violated their rights to enjoy their culture and be free from arbitrary interferences with their private life, family and home,” and that they should be compensated, reported The Guardian.

The decision followed a joint complaint filed by eight adults and six of their children, all Indigenous inhabitants of the four small low-lying islands of Poruma, Masig, Warraber and Boigu in Australia’s Torres Strait region, a press release from the United Nations said.

The complaint asserted that the government violated their rights when it failed to take adequate action to adapt to climate change by reducing greenhouse gas emissions and updating the island’s seawalls.

“This decision marks a significant development as the Committee has created a pathway for individuals to assert claims where national systems have failed to take appropriate measures to protect those most vulnerable to the negative impacts of climate change on the enjoyment of their human rights,” said Committee member Hélène Tigroudja in the press release.

The Torres Strait Islanders claimed weather pattern changes have caused direct harm to their culture, livelihood and traditional way of life. Specifically, the Islanders said family graves have been destroyed in recent years by the tidal surge, scattering human remains. Communicating and visiting with relatives who have died and keeping up the graveyards of their ancestors is an essential part of their cultures, the Indigenous Islanders argued. Fundamental ceremonies are also culturally meaningful only if they are performed in the Islanders’ native lands.

“I know that our ancestors are rejoicing knowing that Torres Strait Islander voices are being heard throughout the world through this landmark case,” Mosby said, as reported by Reuters.

The Islanders contended that strong storms with extreme rainfall have caused degradation to their land and trees, resulting in a reduced amount of available food from long-established farming and fishing.

Sea level rise on Masig has resulted in saltwater seeping into the soil, which has caused coconut trees to become unhealthy and killed the fruit and its coconut water, a part of the traditional diet.

In making their decision, the Human Rights Committee considered the sacred connection the Islanders have with their homeland, as well as how much the health of the islands’ ecosystems affects the integrity of the community’s culture.

“This morning when I woke up on Masig, I saw that the sky was full of frigatebirds. In my culture, we take this as a sign from my ancestors that we would be hearing good news very soon about this case,” said one of the claimants Yessie Mosby from the island of Masig, as The Guardian reported.

In its decision, the Committee said that, although measures are being taken by the Australian government — such as building new seawalls that are expected to be finished by next year — other “timely and appropriate” actions are needed to prevent the lives of the Islanders being put at risk, the press release said.

The ruling went on to say that, without vigorous efforts both nationally and internationally, climate change could cause a violation of the Islanders’ right to life under the International Covenant on Civil and Political Rights.

“States that fail to protect individuals under their jurisdiction from the adverse effects of climate change may be violating their human rights under international law,” said Tigroudja in the press release.

The Committee has requested that Australia compensate the Islanders for the harm they have suffered, take actions to continue to make sure the respective island communities are safe and assess their needs by engaging in meaningful discourse.

“Climate change affects our way of life every day. This win gives us hope that we can protect our island homes, culture and traditions for our kids and future generations to come,” Mosby said, as reported by The Guardian.

<strong>Rare Earth Minerals Are Abundant Enough to Fuel Green Energy Shift, Study Says</strong>
There are enough rare earth minerals to make the transition
By Cristen Hemingway Jaynes
Plant-Based Eating 101: Everything You Need to Know
It’s a lot like how it sounds. In basic terms,
By Linnea Harris
UK Celebs Join Campaign to Get Top UK Banks to Stop Funding Fossil Fuel Expansion
Between 2016 and 2021, the UK’s five largest banks invested
By Olivia Rosane