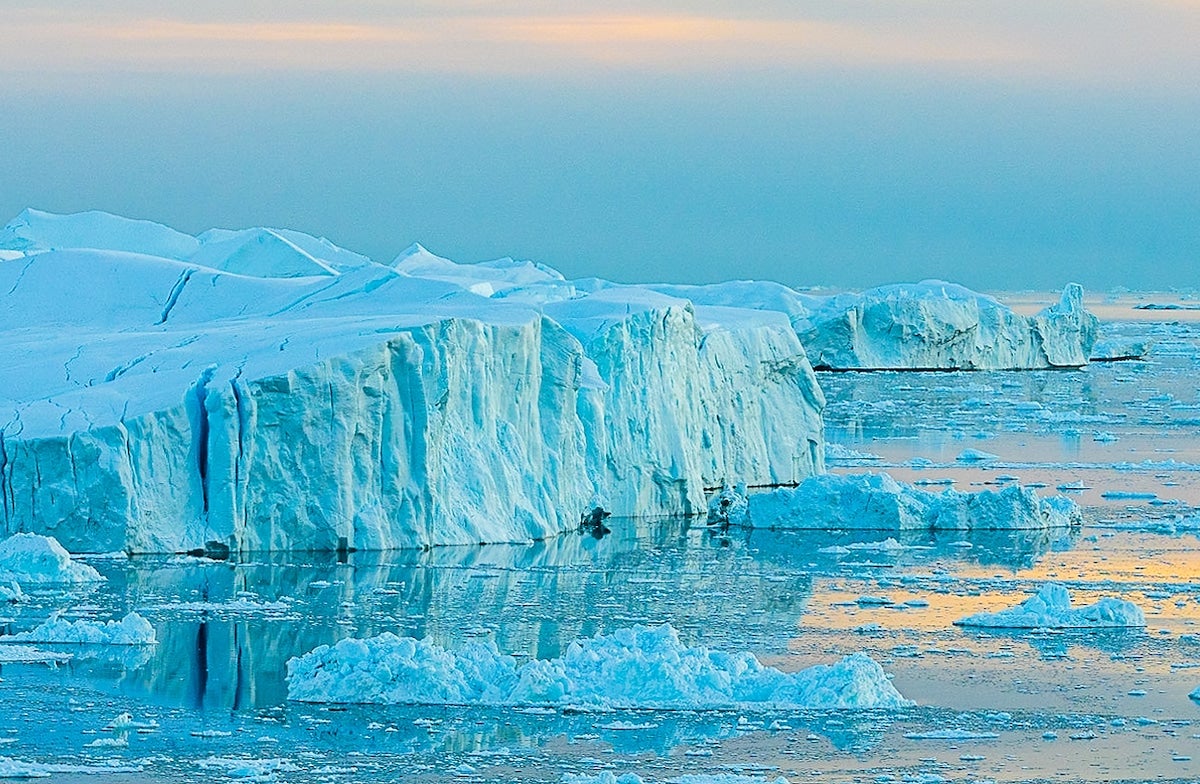 Icebergs near Ilulissat, Greenland on May 8, 2021. Ulrik Pedersen / NurPhoto via Getty Images

The Earth is approximately 1.1℃ warmer than it was at the start of the industrial revolution. That warming has not been uniform, with some regions warming at a far greater pace. One such region is the Arctic.

A new study shows that the Arctic has warmed nearly four times faster than the rest of the world over the past 43 years. This means the Arctic is on average around 3℃ warmer than it was in 1980.

This is alarming, because the Arctic contains sensitive and delicately balanced climate components that, if pushed too hard, will respond with global consequences.

Why Is the Arctic Warming So Much Faster?

A large part of the explanation relates to sea ice. This is a thin layer (typically one metre to five metres thick) of sea water that freezes in winter and partially melts in the summer.

The sea ice is covered in a bright layer of snow which reflects around 85% of incoming solar radiation back out to space. The opposite occurs in the open ocean. As the darkest natural surface on the planet, the ocean absorbs 90% of solar radiation.

When covered with sea ice, the Arctic Ocean acts like a large reflective blanket, reducing the absorption of solar radiation. As the sea ice melts, absorption rates increase, resulting in a positive feedback loop where the rapid pace of ocean warming further amplifies sea ice melt, contributing to even faster ocean warming.

This feedback loop is largely responsible for what is known as Arctic amplification, and is the explanation for why the Arctic is warming so much more than the rest of the planet.

Rarely do the climate models obtain values as high as that. This suggests the models may not fully capture the complete feedback loops responsible for Arctic amplification and may, as a consequence, underestimate future Arctic warming and the potential consequences that accompany that.

How Concerned Should We Be?

Besides sea ice, the Arctic contains other climate components that are extremely sensitive to warming. If pushed too hard, they will also have global consequences.

One of those elements is permafrost, a (now not so) permanently frozen layer of the Earth’s surface. As temperatures rise across the Arctic, the active layer, the topmost layer of soil that thaws each summer, deepens. This, in turn, increases biological activity in the active layer resulting in the release of carbon into the atmosphere.

Arctic permafrost contains enough carbon to raise global mean temperatures by more than 3℃. Should permafrost thawing accelerate, there is the potential for a runaway positive feedback process, often referred to as the permafrost carbon time bomb. The release of previously stored carbon dioxide and methane will contribute to further Arctic warming, subsequently accelerating future permafrost thaw.

A second Arctic component vulnerable to temperature rise is the Greenland ice sheet. As the largest ice mass in the northern hemisphere, it contains enough frozen ice to raise global sea levels by 7.4 metres if melted completely.

When the amount of melting at the surface of an ice cap exceeds the rate of winter snow accumulation, it will lose mass faster than it gains any. When this threshold is exceeded, its surface lowers. This will quicken the pace of melting, because temperatures are higher at lower elevations.

This feedback loop is often called the small ice cap instability. Prior research puts the required temperature rise around Greenland for this threshold to be be passed at around 4.5℃ above pre-industrial levels. Given the exceptional pace of Arctic warming, passing this critical threshold is rapidly becoming likely.

Although there are some regional differences in the magnitude of Arctic amplification, the observed pace of Arctic warming is far higher than the models implied. This brings us perilously close to key climate thresholds that if passed will have global consequences. As anyone who works on these problems knows, what happens in the Arctic doesn’t stay in the Arctic.

Jonathan Bamber is a professor of physical geography at the University of Bristol.