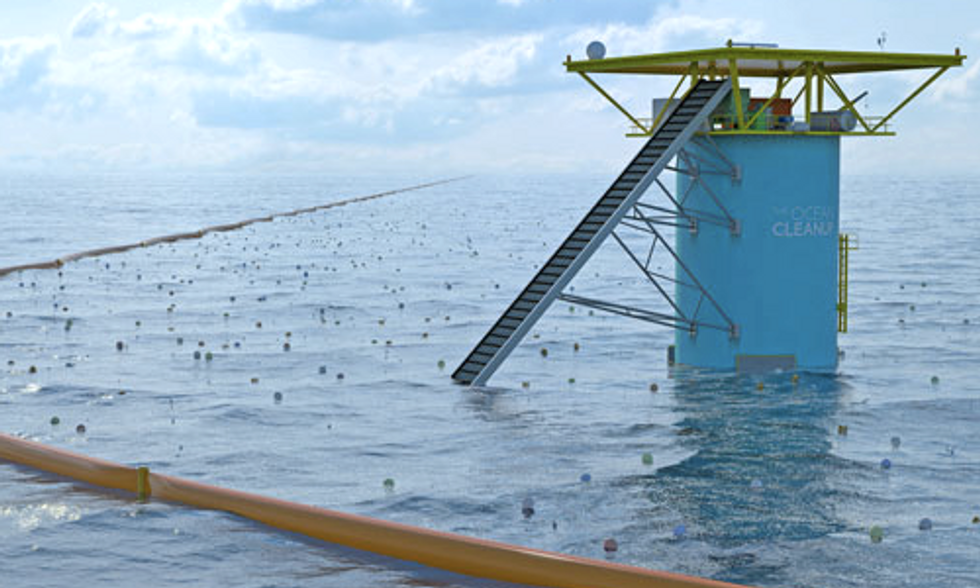 Last June, an intrepid teenaged environmentalist made headlines after developing The Ocean Cleanup, described as the "world's first feasible concept to clean the oceans of plastic."

Boyan Slat, a Dutch former aerospace engineering student, said his plastic-capturing concept can clean half the Great Pacific Garbage Patch in a decade. The project was inspired after the young man took a diving trip in Greece in 2011 and saw more plastic in the water than fish.

Slat's ambitious project—proposed when he was only 17—received a slew of accolades and was recently named a finalist in London's Design Museum′s Design of the Year awards, which "celebrate design that promotes or delivers change, enables access, extends design practice or captures the spirit of the year."

The design involves a static platform that passively corrals plastics as wind and ocean currents push debris through V-shaped booms that are 100 kilometers long. Photo credit: The Ocean Cleanup

The design involves a static platform that passively corrals plastics as wind and ocean currents push debris through V-shaped booms that are 100 kilometers long. The floating filters would catch all the plastic off the top three meters of water where the concentration of plastic is the highest, while allowing fish and other marine life to pass under without getting caught. Besides natural currents, the self-sufficient platform would also be powered by 162 solar panels.

Traditional strategies of capturing ocean plastic usually involve vessels and nets, but Slat's study pointed out, "Not only would by-catch and emissions likely cancel out the good work, but also, due to the vastness of areas in which the plastics concentrate, such an operation would cost many billions of dollars, and thousands of years to complete."

Besides natural currents, the self-sufficient platform would also be powered by 162 solar panels. Photo credit: The Ocean Cleanup

The platform would be emptied of its haul every month and a half. As for what can be done with the plastic, the Ocean Cleanup team tested degraded plastic from the Hawaiian shoreline and found that it's suitable to be turned into oil. They have also tested whether or not the plastic can be recycled.

Critics have written off the idea, but Slat and 70 other scientists and engineers composed a 530-page feasibility report, and concluded that the concept "is indeed likely a feasible and viable ocean cleanup technique." Their conclusion has also been peer-reviewed by external experts, Slat wrote in a blog post.

As for what can be done with the plastic, the Ocean Cleanup team tested degraded plastic from the Hawaiian shoreline and found that it's suitable to be turned into oil. Photo credit: The Ocean Cleanup

After releasing the feasibility report, Slat launched an extremely successful crowdfunding campaign that garnered support from 38,000 funders from 160 countries, and raised $2 million in 100 days. The project is currently in phase two in which a team will build a large-scale, fully operational pilot of the design near the Azores Islands within the next three to four years.

After introducing the idea at a 2012 TEDx Talk conference in the Netherlands, the Ocean Cleanup crew has since gone on several gyre expeditions. Last month, a sampling team took off for a month-long trip to the North Atlantic Gyre. Slat tweeted some good news from the crew:

Message from sat phone: our crew in Atlantic Ocean is trawling & new design is working!

We previously mentioned that plastic threatens marine life and marine ecosystems, and also causes about $13 billion in damages to marine ecosystems each year. In the video below, Slat talks about how his concept could rid the world of this costly environmental menace with seemingly little effort.