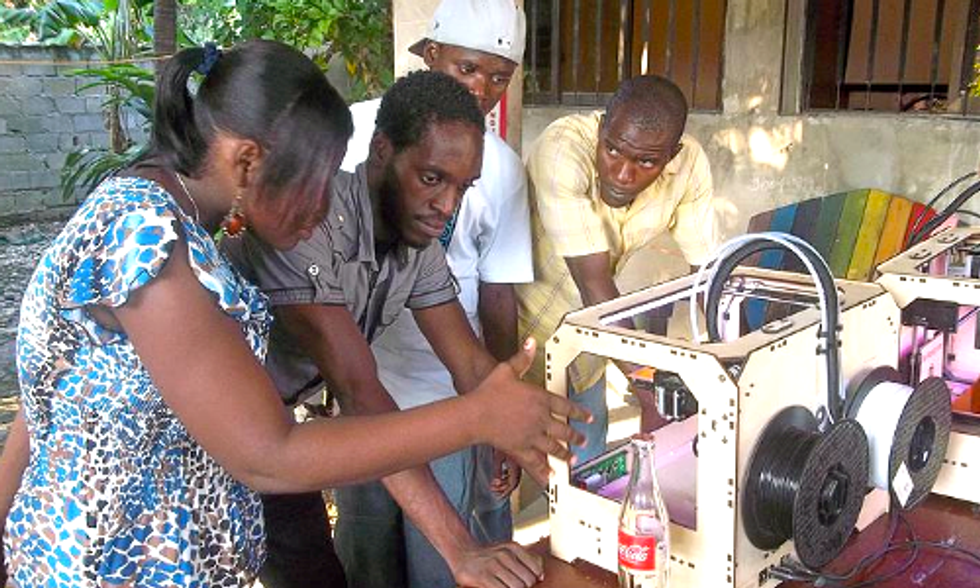 We've already seen how 3D printing can tackle plastic waste and even create nutritious food. And now, the ever-expanding technology is also bringing simple yet potentially life-saving devices to people in developing countries.

3D printing has become an increasingly affordable and life-changing technology to places in need, such as manufacturing simple medical devices in Haiti. Photo Credit: Field Ready

Incredibly, his designs are open-source, which means people can use, study, copy and change a design for free, he told The Guardian.

The prospect of using solar-powered printers is especially important for locations that have little to no access to electricity or when power has been destroyed by a natural disaster such as an earthquake. As we mentioned previously, about a quarter of the world’s population—1.6 billion people—live without electricity.

It could also produce important devices at pennies to the dollar. For example, Pearce's lab created an open-source 3D printable colorimeter for testing water which cost only $50 and worked just was as well as one costing $2,000.

In the video below, Dara Dotz, Field Reader designer and co-founder described how a simple umbilical cord clip could be printed out in under  10 minutes. She also pointed out the importance of producing products on-demand in the onset of disasters, such as the 2010 Haitian earthquake.

"During the earthquake, the airport was actually overflowing with a bunch of materials, some of which were not needed," she said. "[But] the tools and medication that were needed couldn't actually get access because of the congestion."

In other sustainability measures, the organization is training and hiring local residents to use 3D printers and also piloting the use of recycled plastics in order to cut waste. They also hope to eventually switch to solar-powered 3D printers, as their current printers run on batteries and generators.

"The items that we can actually manufacture tend to be small but the ability to make many different things is what's really unique about it," Eric James, the director of Field Ready, said. "As long as we have the basic power source and the designs, we can fabricate virtually anything that would be needed."

As 3D printing technology becomes more and more affordable, the possibilities for manufacturing scientific equipment and medical supplies are endless. Peter Bermant, a senior at Park City High School in Utah, used a 3D printer to create a concept syringe that could mix vaccine ingredients as it's injected into a patient, eliminating the need for refrigeration (a costly hurdle for off-grid communities). A University of Washington team of students used 3D printing to turn waste plastic into composting toilets and rainwater harvesting systems.

The video below shows Alois Mbutura, a 21-year-old electrical engineering student at the University of Nairobi in Kenya, who used a MakerBot 3D printer to create an affordable medical device that helps doctors administer intravenous needles to infants. It's said that about 100 of these devices could be produced in a day using the 3D printer.

"The vein finder was actually a solution that the School of Health and School of Engineering partnered to reduce the inability of health care people to find veins in babies and also for it to be economical and suited to Kenya," said Mbutura.