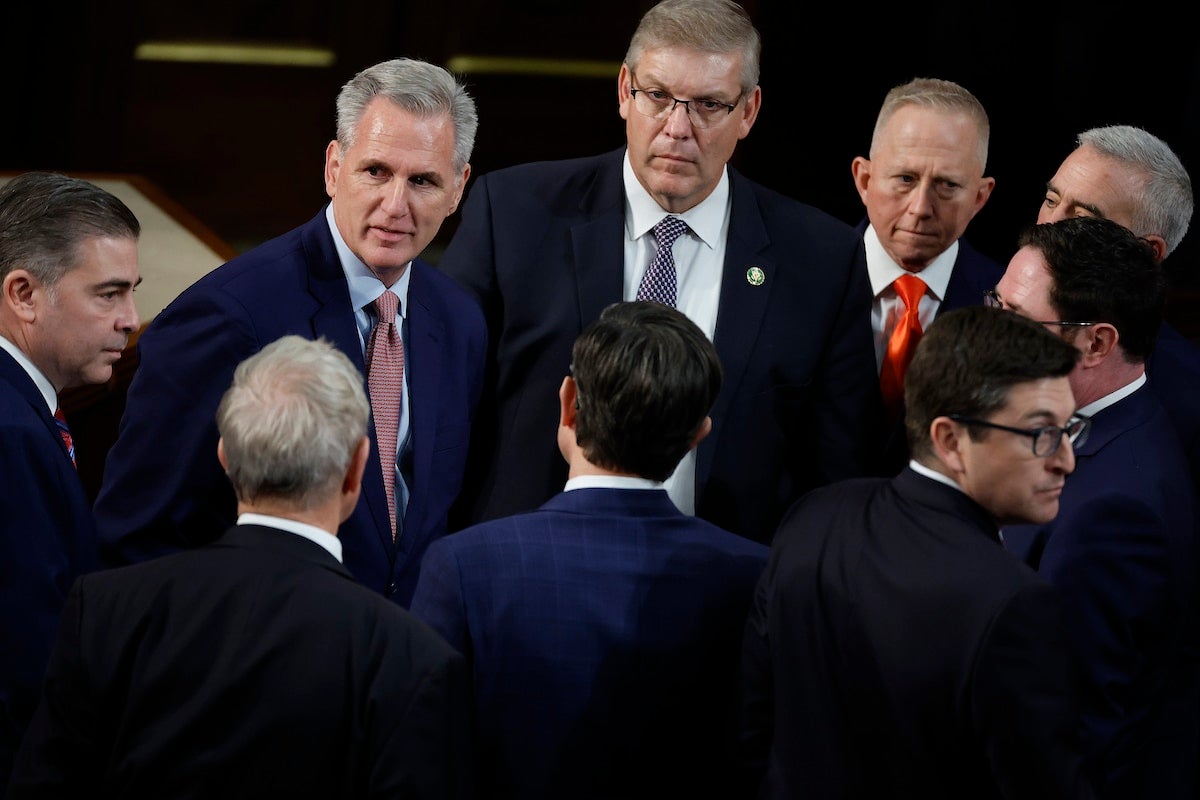 U.S. House Minority Leader Kevin McCarthy (R-CA) (2nd L) talks with fellow Republican members of the House in between roll call votes for Speaker of the House of the 118th Congress in the House Chamber of the U.S. Capitol Building on Jan. 3, 2023 in Washington, DC. Chip Somodevilla / Getty Images

Rep. Kevin McCarthy (R-Calif.) failed, again, and again to secure election as Speaker of the House of Representatives on Tuesday as 20 members, including 18 election deniers, refused to support his candidacy.

McCarthy also ran for Speaker in 2015 and his failure to secure victory after the first ballot is the first such failure in a century. The “unsteadiness… circular firing squad [and] dysfunction” (as Sen. Shelley Moore Capito (R-W.Va.) described it to Politico) of the House Republican caucus augurs ill for stable governance.

House Republicans have vowed to attack the consideration of environmental, social, and corporate governance (ESG) factors in investing in the new Congress and whatever may happen at the federal level, state GOP officials are forging ahead. Kentucky State Treasurer Allison Ball threatened to divest state funds from 11 major financial firms including Citigroup, JPMorgan Chase, and BlackRock unless they invest in fossil fuel companies.

Republicans may not be able to turn back the ESG movement, which has taken such a firm hold that 90 percent of companies say they either have or are developing a formal strategy to manage corporate environmental, social and governance practices, according to the mutual fund research firm Morningstar. But the politicization of ESG could make it something like school textbooks, mask-wearing and Covid vaccines. Where investors stand on the nation’s political divide — and to a large extent, what state they live in — could determine whether their savings are exposed to the risks of climate change or the opportunities of the clean energy transition.

“This is clearly kind of a bizarre effort to open up a new front in the culture wars, and it’s really at odds with how the market works and the fundamentals of capitalism,” said Gregory Wetstone, president and CEO of the American Council on Renewable Energy. “They’re sacrificing other people’s financial well-being for their political agenda.”

Biden’s EPA Protects Alaska’s Bristol Bay From Controversial Pebble Mine
The watershed of Bristol Bay, Alaska, is home to the
By Olivia Rosane
These Artists Are Turning Their London Street Into a Solar Power Station
The climate crisis, the energy crisis in Europe and rising
By Cristen Hemingway Jaynes
Emirates Successfully Tests Flying Boeing 777 Plane on Sustainable Jet Fuel
The airline Emirates has successfully tested flying a Boeing 777-300ER
By Paige Bennett