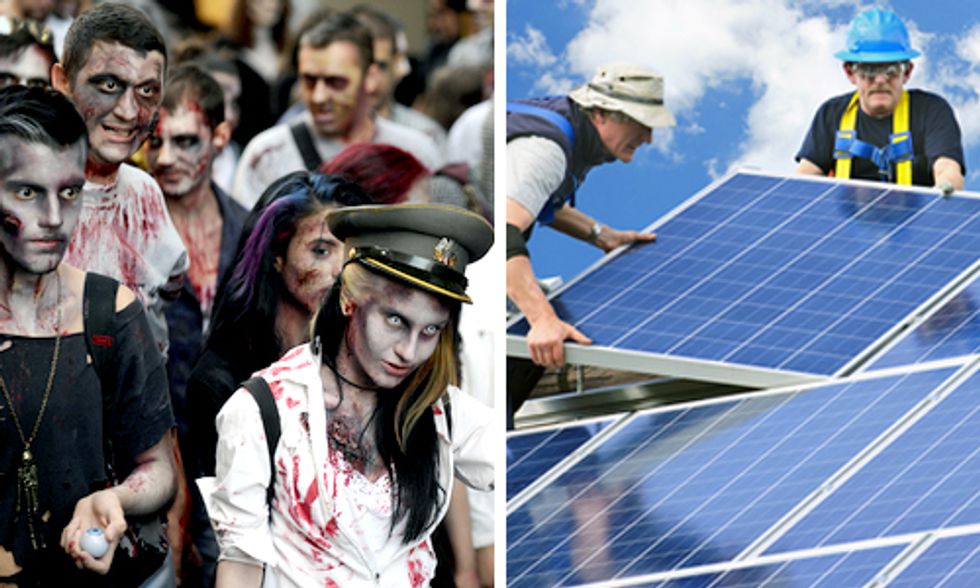 In the past, I have compared big, polluting fossil fuel companies to zombies. Now I feel bad. Upon reflection, I believe I may have been a little unfair—to zombies.

You might not like zombies, but you can't really blame them for being that way. It's not like they chose to join the walking dead. In a way, zombies are victims. You can't say the same for fossil fuel corporations and big utilities, though. In the face of urgency to act on climate and despite exciting clean energy options, too often they are choosing the dark side—or at least obsolescence—of their own volition.

The latest round of fossil fuel zombie attacks is coming from big utilities that want to stop the spread of rooftop solar.

The latest round of fossil fuel zombie attacks is coming from big utilities that want to stop the spread of rooftop solar. Just like a zombie horde, they use tactics that are clumsy, somewhat brainless and yet potentially effective.

Here's how it works: Utilities (and the fossil fuel corporations from which they buy dirty fuels like coal and gas) convince a "friendly" legislator to introduce a bill to hit solar customers with an extra tax or fee to make solar more expensive. These bills are usually based on a template written by the Koch brothers-backed American Legislative Council (ALEC). An alternate tactic is to go to the state utility commission and try to convince the regulators there to add the extra fees. The usual claim is that customers who have solar panels are "freeloading" by taking advantage of the grid infrastructure—even though they might not be buying much electricity. If they get their  way, the zombies—who don't know they're already dead—win a temporary victory.

In the real world, studies like this one commissioned by the Nevada Public Utilities Commission have found zero basis for the argument that solar customers are hurting non-solar customers. No, what's actually got the utilities spooked is the prospect of an ever-increasing number of their customers generating their own solar power and reducing  their power bills. One way they're doing that is through "net metering," which utilities really hate. I wrote a whole post about this a few years ago when it came under attack in California, but basically it means solar customers get credit for all of the energy they generate and contribute to the grid.

There's one big problem with this campaign against rooftop solar. Across the U.S., people love solar power. A poll released early this year found that 80 percent of voters want the country to rely more on solar energy in the next five years. Solar may be one of the few things that almost everyone in America agrees on. What's not to like about free energy that creates no pollution? The benefits are so obvious that rooftop solar actually goes viral. One studyfound that as soon as solar establishes a foothold in an area, it starts spreading in a "wave-like centrifugal pattern."

So when politicians introduce ALEC-authored bills to kill rooftop solar, they suddenly find themselves facing a crowd of angry constituents who want to know whether baseball, mom, or apple pie will be the next target.

As I said, these attacks on solar customers are both clumsy and poorly thought-out. Even so, we cannot afford to ignore them. Rooftop solar can't be completely stopped—it's just too good an idea. But if enough of these bills were somehow to get passed, or if enough utility commissions were to adopt regressive fees, it could slow down the viral spread of solar. And that would mean fewer clean energy jobs (solar energy is a job-creating machine that employs 174,000 Americans), more air-pollution deaths, higher utility bills, and of course, a harder time meeting our goals for cutting carbon emissions and stopping climate disruption.

The irony is that utilities do have reason to be concerned. Over the long term, rooftop solar will have some effect on their business. The smart response, though, isn't to double down on an archaic system. Instead, utilities need to adapt and adopt a business model that incorporates the inevitable rise of distributed energy sources.

Instead of wasting time and resources on helping the Koch brothers sow fear, uncertainty, and doubt about renewables, why aren't utilities working on a strategy for modernizing the outdated U.S. grid, which costs our economy $25 billion or more every year because of outages? And you can bet that extreme weather will only make that problem worse. Clean, free distributed solar energy from millions of rooftops is actually going to be a big part of the solution. Eventually, utilities will see that or they will fail.

In the meantime, though, we have some zombies to fight off. Clean energy champions did exactly that in Indiana earlier this month, but solar is still under attack in states like Florida and Georgia. The next undead outbreak could happen anywhere. Count on this, though: The Sierra Club's unparalleled nationwide network of grassroots activists will be at the forefront of helping to turn back these attacks wherever they happen. Let the sun shine (and the zombies beware)!