Is Zion National Park Being Loved to Death? 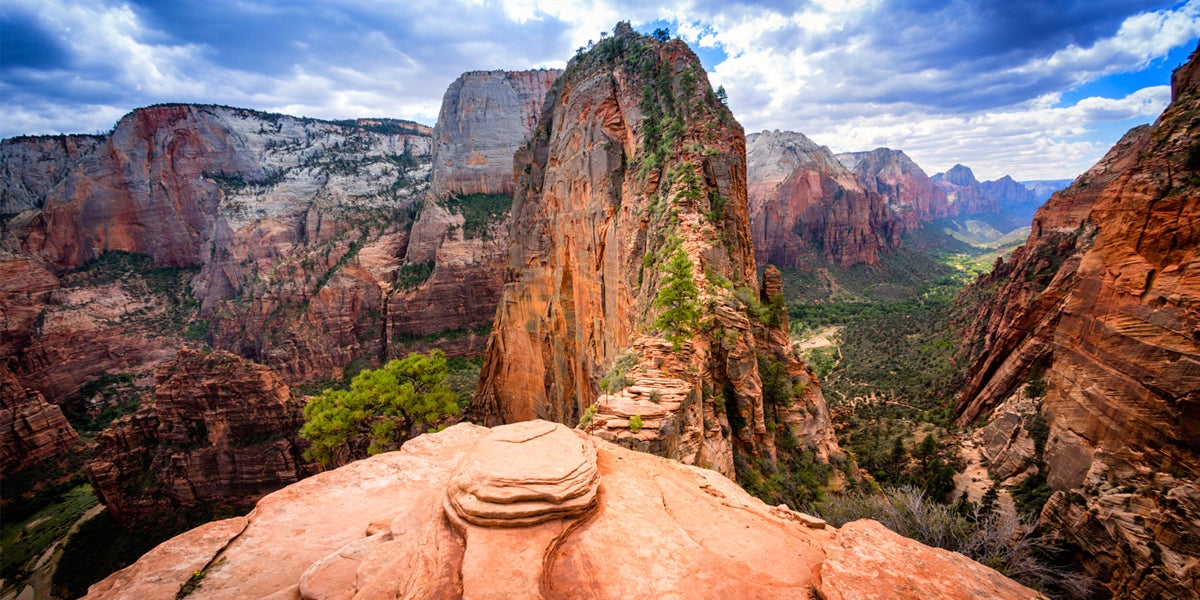 I’m looking up at the final ascent to Angels Landing in Utah’s Zion National Park, trying to work up my courage to scale the Dr. Seuss–like series of sheer climbs and even sheerer drops, the canyon 1,500 feet below me on either side. My biggest fear isn’t a misstep—though the highly eroded trail is coated with slippery dust—but being bumped by one of the thick crowd of hikers impatiently waiting their turn at each knife-edge passing.

Turns out I’m not the only one worried about the risks posed by crowds and erosion to Zion’s famed peaks and canyons. Concerns about visitor health and safety have become so acute that the National Park Service has unveiled a proposed management action plan that includes such draconian measures as limiting the number of visitors in Zion Canyon at any one time and requiring permits for the most popular hikes.

Do you love the great outdoors? Add these 10 hikes to your #BucketList! http://t.co/UmfpwzuRuj @EcoWatch pic.twitter.com/effkNfAQz2

“It doesn’t take many people to wear sandstone back down into sand and we’ve seen a surge in degradation due to people disrespecting the fragile ecosystem,” said Alyssa Baltrus, chief of interpretation and visitor services for Zion National Park. Among the biggest problems is “social trailing”—people making their own bypass trails when popular routes get too crowded—and cars pulling off the road into non-designated parking areas.

Zion’s overcrowding crisis has been a long time coming; visitor numbers have risen year over year for decades. But for the past six years, it’s been one boom year after another, with 2015 seeing a jump of more than 450,000 visitors during 2014 to a record 3.7 million. Although visitor numbers for 2016 aren’t in yet, the expectation is that they’ll top 4 million.

While Zion used to be popular primarily from late spring to early fall, those seasons now extend further each year. For instance, take March, traditionally quiet because of cold and snow. This year, March visitation jumped 112 percent during 2015.

If you’ve been to Zion in recent years, you know the result. Parking lots fill up by 8:30 a.m., with street parking extending farther and farther back down the highway through the highly congested town of Springdale and beyond. While there’s a well-run shuttle system designed to handle the overflow, the buses also fill up, with long wait times to get on and people packed together, like the subway at rush hour. Even once visitors disperse among the various park highlights, the crush of people snapping selfies at must-see spots such as the Emerald Pools can be oppressive.

The most common subject of complaints from visitors? “Other visitors,” said Baltrus. Some of the most vociferous griping has been about Angels Landing and the Narrows, a spectacular hike up a slot canyon, much of which takes place while wading knee-deep in the Virgin River.

Permits are required for the 16-mile “top down” hike, but anyone can venture up the lower five-mile stretch of the Narrows from the Temple of Sinawava—and they do; it’s common during the high season to slosh your way upriver behind large (and often loud) groups in matching gear rented from local outfitters.

To deal with the problems, the park service has taken a series of actions over the years, from closing Zion Canyon to cars and instituting the shuttle system to adding portable toilets in the parking lots, scheduling extra end-of-day buses and expanding overflow parking.

But those are stopgap measures at best. Some strategies resulted in additional unforeseen problems. For example, in an effort to stop Angels Landing hikers from availing themselves of the natural facilities, the park service installed evaporative toilets at Scout Lookout, the final rest stop. But it miscalculated the need.

“Because of the increase in use at Scout’s Lookout, the toilets quickly fill with liquid and stop effectively evaporating waste,” said Baltrus. That waste must be removed by helicopter, which proved much harder to do than planned. The result: roped-off Porta-Johns reeking a few feet from picnickers. “Over the past two years, we have been asking visitors to use the restrooms at the bottom of the trail instead and only use the ones at Scout’s Lookout for emergencies, but our efforts have not been very successful,” she said.

In other words, the real problem remains the sheer number of people in what is a relatively small park and for that, the only solution is visitor limits. The National Park Service seems to be serious about taking what could be a first-ever step.

“A key component of this proposed action would be to directly manage visitor use levels in the park through establishment of visitor capacities,” reads the Visitor Use Management Plan newsletter. “Visitor capacities, which could vary by season and/or specific areas of the park, would be established, along with implementation techniques that would directly manage the amount and time of visitor access.”

More specifically, the Visitor Use Management Plan includes options such as:

In other words, so much for spontaneity; you’ll need to plan ahead if you want to see the glories of Zion Canyon between May and October.

It’s not just in the canyon that crowds are a problem. Ask anyone who’s sat in the snaking line of cars waiting to check out the window views from the historic Zion-Mount Carmel Tunnel. Every summer the lines get longer, in large part because of the need to stop two-way traffic to allow oversize vehicles like RVs to pass. One option on the table is to add an automated traffic signal; another is to restrict passage of oversize vehicles to certain times of day.

Needless to say, the more draconian options are being met with resounding no’s, at least in some quarters. But regular visitors hope the changes will bring back their beloved Zion of the past. In Springfield, where residents are trapped from getting into and out of town at some times of day, change is long overdue.

The initial public comment period closed on Nov. 23 and now the difficult work of deciding among the various possible scenarios begins. But not to worry if you haven’t had your say yet. In the spring, the National Park Service will unveil its recommendations and then invite further comments.

“The potential actions are all possibilities that came from the initial community meetings and they’re there to generate further discussion and to inspire people to think of other ideas,” said Baltrus. “The more input and ideas we get at this point in the process, the better the alternatives will be.”

Got your own idea for how to save Zion from being loved to death? Get ready to speak up.