Ryan Zinke Claims One Third of Interior Workforce ‘Not Loyal’ to Him, Trump and Flag 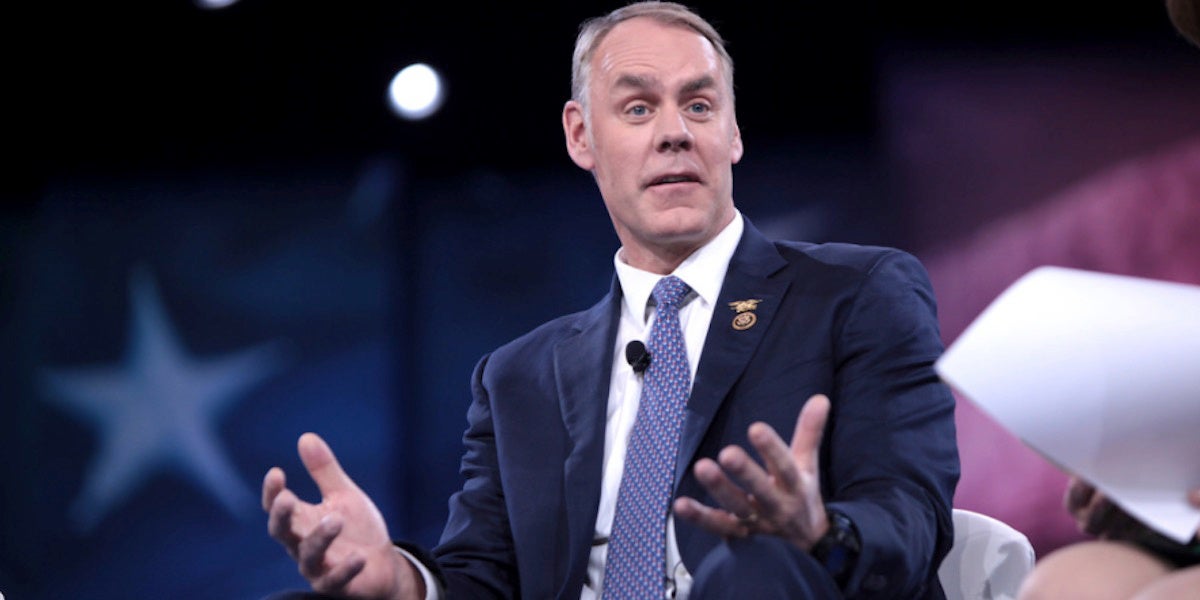 Interior Sec.
Ryan Zinke, who recently recommended shrinking a “handful” of national monuments to President Trump, said that one third of the department’s employees are “not loyal” to him, the president and the flag.

The remarks were made at the National Petroleum Council meeting in Washington, DC on Monday.

According to an Associated Press report:

Zinke, a former Navy SEAL, said he knew when he took over the 70,000-employee department in March that, “I got 30 percent of the crew that’s not loyal to the flag.”

In a speech to an oil industry group, Zinke compared Interior to a pirate ship that captures “a prized ship at sea and only the captain and the first mate row over” to finish the mission.

“We do have good people” at Interior, he said, “but the direction has to be clear and you’ve got to hold people accountable.”

To help steer this proverbial pirate ship, Zinke has appointed a crew from the fossil fuel industry, including former oil lobbyist David Bernhardt as the deputy interior secretary.

He has also reassigned senior officials to completely unrelated positions, including climate change expert Joel Clement, who was notoriously transferred to an office that oversees fees and royalty checks from oil and gas companies.

“I’m the climate change guy, and they moved me to the accounting office that collects fossil fuel royalties,” Clement wrote in the Washington Post. “They couldn’t have found a job less suited for me, or that sent a clearer signal that they were trying to get me to quit.”

Zinke has said before that he wants to cut his department’s workforce by 4,000 employees, or about eight percent of the full-time staff, as part of budget cuts to downsize the department.

During his speech to oil execs, the former Montana Republican senator said he is working to change the Interior Department’s regulatory culture to be more business friendly, and is working on a major agency reorganization so that decision-making would go outside Washington, according to the AP.

The secretary also wants to move several agencies, including the Bureau of Reclamation and Bureau of Land Management, to states in the West.

In the same wide-ranging speech, Zinke said he wants to speed up permits for oil drilling, logging and other energy development; that the Endangered Species Act has been “abused” by bureaucrats and environmental groups and needs to be reformed to be less “arbitrary”; and, oddly, “Fracking is proof that God’s got a good sense of humor and he loves us.”