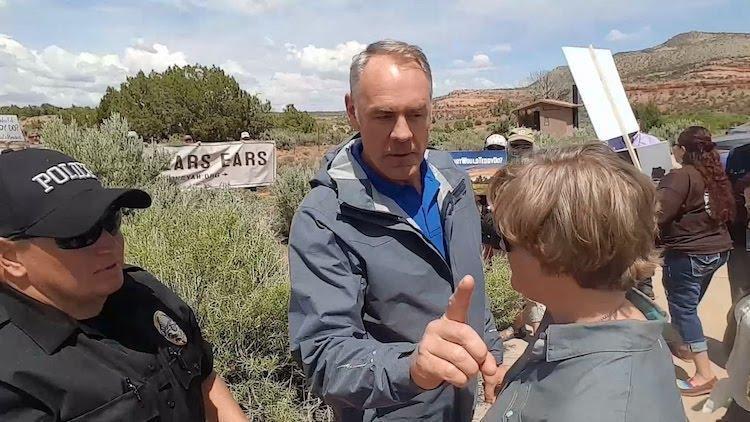 During a tour of the heavily contested Bears Ears National Monument in Utah on Monday, U.S. Interior Sec. Ryan Zinke pointed a finger at monument supporter Cassandra Begay and told her to “be nice” after she repeatedly questioned the secretary about not spending more time talking with tribal leaders as part of his monuments review.

Begay, a tribal liaison with the group Peaceful Advocates for Native Dialogue & Organizing Support, described the encounter as “condescending and unnecessarily aggressive.”

Footage of the incident shows Begay among a throng of Bears Ears monument supporters crowding around Zinke. At one point, the Native American activist asks the secretary, “When are you going to meet with the tribal leaders? It’s kind of unfair that you’ve only met with them for one hour, sir. Is there a reason why you’re not listening to them more?”

Zinke turns around, juts his finger at Begay and says, “Be nice.”

“I was scared, and my heart was racing,” Begay said in a press statement following the encounter. “It felt condescending and unnecessarily aggressive. I have no idea why asking a simple question to somebody who is on a listening tour would react so aggressively.”

As EcoWatch reported, the 1.35-million acre Bears Ears National Monument is one of the first targets under President Trump‘s recent executive orders to review 27 national monuments established by prior presidents.

Zinke is on a four-day tour of Utah to inspect two monuments, Bears Ears and Grand Staircase-Escalante. The Bears Ears monument, created by President Obama last year, has sparked a fierce debate between Republican lawmakers and conservationists.

But conservationists and tribal supporters of the Bears Ears monument worry that stripping away the designation could leave the environment and sacred lands vulnerable.

“Bears Ears is much more than the preservation of sacred sites and of the environment. It is also the story of our resilience and survival. It is a site of resistance and of restitution,” James Singer, a Navajo and Democrat candidate running to unseat Sen. Hatch, said. “I urge Secretary Zinke to stand with us to protect the sacred so that our future generations will continue to walk in harmony.”

The secretary has met twice with members of the Bears Ears Inter-Tribal Coalition, which represents the Hopi, Navajo, Ute Indian Tribe, Ute Mountain Ute and Zuni. The group considers many sites within Bears Ears sacred and has complained that Zinke’s time with them was insufficient, according to E&E News. Other monument supporters have also criticized Zinke’s lack of a public forum and for allegedly refusing to meet with them.

“Tribes are trying to have a voice but every week Utah congressional delegates are claiming that there are no tribes in San Juan county and that no locals support the monument, however there are three tribes in San Juan county and 40-60 percent of its residents support the monument,” Begay stated. “We need Secretary Zinke to meet with tribal leaders, who can identify burial sites, ceremonial sites, historic areas, medicinal herbs, and antiquities throughout the monument.”

Zinke told reporters Tuesday that he has not made up his mind about whether Bears Ears should remain a monument or if its borders should be shrunk or expanded. He has until June 10 to report back to Trump.