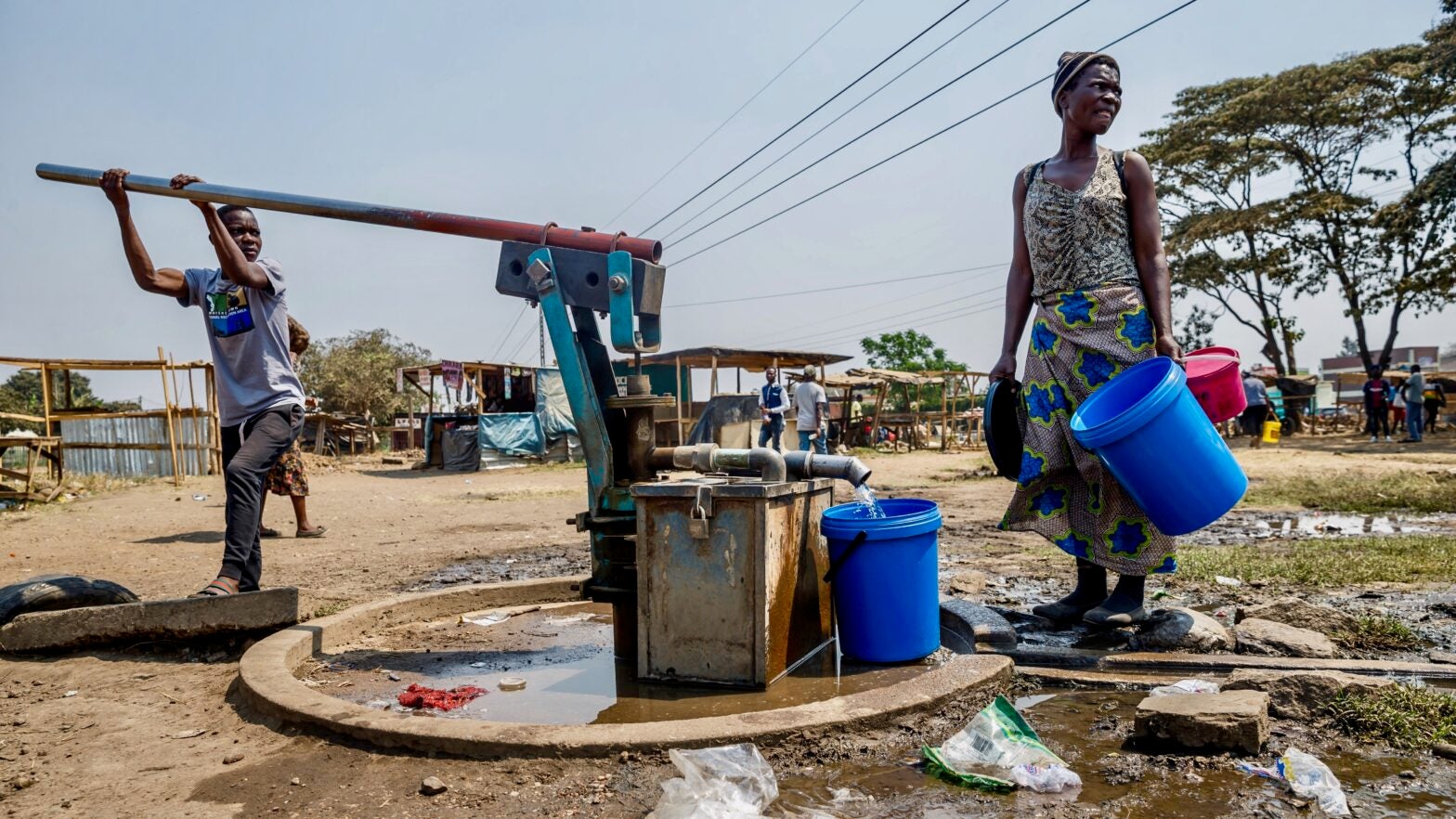 A young boy pumps water as a woman collects it into buckets in Zimbabwe's capital Harare on n Sept. 19, 2018, where the cholera outbreak was first detected. JEKESAI NJIKIZANA / AFP / Getty Images

The 2 million residents of Harare, Zimbabwe’s capital, and its surrounding areas found themselves without water on Monday and Tuesday when the authorities abruptly shut down the city’s main water treatment plant, raising fears of cholera outbreaks and other water borne diseases, as the AP reported.

He said the money shortage meant the council had to close its Morton Jaffray treatment plant outside of Harare.

“It (the shutdown) is due to the non availability of foreign currency…it is devastating to say the least,” Mupamawonde told reporters as he urged President Emmerson Mnangagwa’s government to declare the water crisis a national disaster, according to Reuters.

He also told reporters that officials were working to secure a week’s supply of chemicals from Bulawayo, the country’s second-biggest city, to resume operation and they hoped to get water running in homes by late Tuesday, according to CNN.

The Morton Jaffray treatment plant did resume pumping water yesterday, which brought some relief to residents, as Reuters reported.

“The secured quantities will only last seven days during which period other quantities will be secured. We are currently engaging all stakeholders, including the government to find a lasting solution to the water crisis,” said Mupamaonde on Tuesday, as CNN reported.

Zimbabweans have endured a harsh drought this year after an abnormal El Niño season. Water levels in the country’s polluted reservoirs have dropped precipitously, leaving cities and towns without the ability to provide water to their residents. Earlier this summer, the country’s two largest cities started rationing water to their residents, allowing some people to have running water only once a week, as EcoWatch reported.

“The toilets at school are just too filthy, people continue using them yet there is no water,” said Dylan Kaitano, a 12-year-old waiting in line at wells, to the AP. “I didn’t go to school today because I have to be here.”

Debris such as plastic bottles, tires and algae floated in the shallow waters at the Chivero reservoir, the city’s main water supply. The water, which looks green, also releases a choking, foul smell, according to the AP.

The water shortages have made the quality of life plummet in Harare, which now frequently has cases of typhoid triggered by water shortages and broken sewers. Many residents have had to fetch water from unsafe wells and defecate outdoors, according to the AP.

Tambudzai Murwa, a Harare resident, told CNN she dug a well to meet her needs since the water rationing started.

“We hardly have water in our taps,” she said. “We pray daily that the cholera outbreak does not recur. A few boreholes were dug, but you have to queue for long to get water, yet we have other things that we have to queue for in our lives.”

Twenty-six people died last year in a cholera outbreak, prompting President Emmerson Mnangagwa to express dismay that Zimbabweans were perishing from a “medieval” disease, according to the AP.

“Nothing is working in this country, how do we survive?” Hatineyi Kamwanda, another Harare resident said to the AP, referring to the country’s shortages of medicine, food and fuel, in addition to water. “We can’t even use the toilets, the children are not going to school because of this and now we fear cholera is going to hit us again. The president should treat us as human beings, we voted for him.”

The water was turned back on near midnight Tuesday evening, but it is just a buffer period while the city scrambles to come up with the necessary money to pay for water purifying chemicals, according to Reuters.

“We are taking this as a buffer period to work around what happens next,” said Mupamawonde at a media briefing, as Reuters reported. He said that some of the city’s chemical supplies were stuck at the border with South Africa in the south, awaiting payment and clearance.