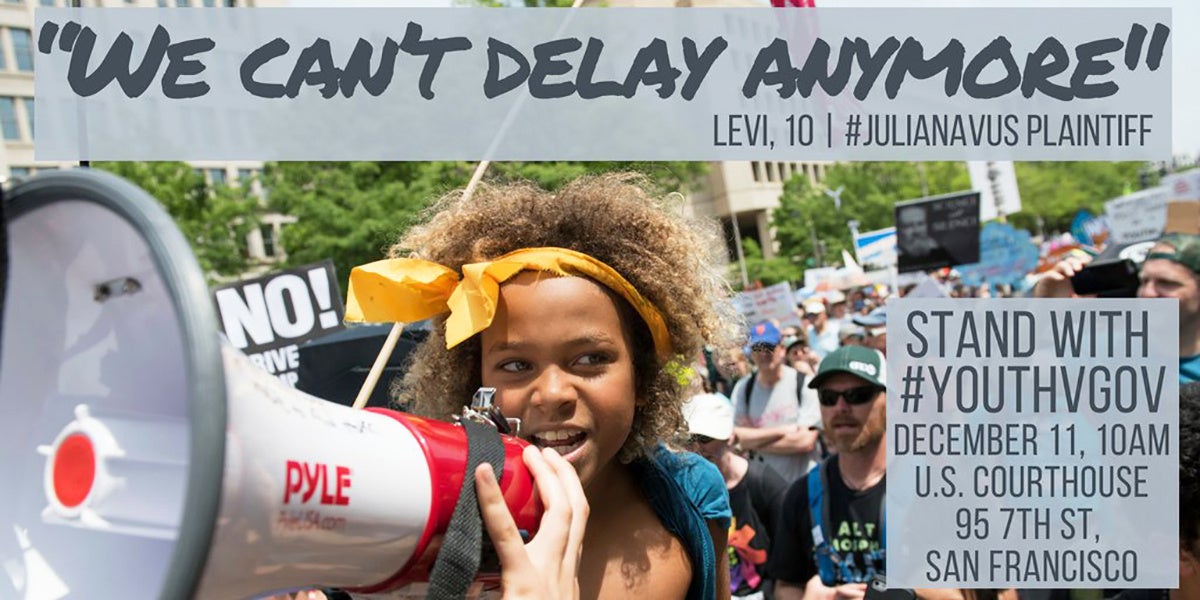 There has been a significant development in the constitutional climate change lawsuit so far successfully prosecuted by 21 youth plaintiffs: The Ninth Circuit Court of Appeals has decided to hear oral argument over whether the Trump administration can evade trial currently set for Feb. 5, 2018. Oral arguments will be heard before the Ninth Circuit Court of Appeals in San Francisco on Dec. 11 and can be watched on a live stream beginning at 10 a.m. PST.

The subject of oral arguments will be the Trump administration’s extraordinary mandamus petition filed in June, which seeks the Ninth Circuit’s review of U.S. District Court Judge Ann Aiken’s 2016 denial of motions to dismiss in Juliana v. United States. In their petition, Trump, et al., claim irreparable harm for having to participate in the ordinary pre-trial discovery process and go to trial. The next step in the case would ordinarily be for the Trump administration to face the youth and their scientific evidence at trial, and then later appeal an adverse ruling after a final judgement in the case.

“We look forward to the opportunity to argue this case before the Ninth Circuit so that we can move quickly to trial,” Julia Olson, co-counsel for plaintiffs and executive director of Our Children’s Trust, said. “The Trump administration should not be able to dodge judicial review of such egregious constitutional infringements of these young people’s liberties.”

“They are knowingly destroying our climate system and the healthy futures for our young plaintiffs. This administration can respond to the limited discovery we seek, and put on its junk climate science at trial in a court of law. What it can’t do is shut the courthouse doors to real constitutional injuries brought by these young people. We believe the Ninth Circuit will be the bulwark against their dodge and evade tactics,” Olson added.

“Every week, or even every day, that our trial is delayed is time I spend further worrying about the stability of our climate system and the security of my future,” Kelsey Juliana, 21-year-old named plaintiff from Eugene, Oregon, said. “I’m excited for the Ninth Circuit judges to hear from my lawyers, and to have our case in front of them. Another step forward, onwards to climate and constitutional Justice!”

In July, a three judge panel of the Ninth Circuit, consisting of judges Alfred Goodwin, Alex Kozinski and Marsha Berzon, placed a temporary stay on the district court proceedings and ordered briefings on the mandamus petition.

Judge Aiken and Magistrate Judge Thomas Coffin, of the District Court in Oregon, filed a letter with the Ninth Circuit in August, referring to the issues presented by the youth’s case as “vitally important” and stating that they “do not believe that the government will be irreversibly damaged by proceeding to trial.”

1. There is a fundamental constitutional liberty right to a climate system capable of sustaining human life.

2. The federal government has fiduciary public trust responsibilities to preserve natural resources upon which life depends.

3. The youths’ requested remedy (ordering the development and implementation of a national climate recovery plan based on a scientific prescription) is an appropriate remedy if the court finds a violation of the youths’ constitutional rights.

Among the facts to be determined at trial are whether the federal government’s systemic actions over the past decades enabling climate change have violated the young plaintiffs’ constitutional rights.

“What is urgently needed right now is a clear, scientific and constitutional discussion of the irreparable harm that climate change is doing to this nation’s youth and the ways we can hold our leaders accountable to begin serious climate recovery efforts,” Jacob Lebel, 20 year-old-plaintiff from Roseburg, Oregon, said.

“I am glad that we will have the opportunity to hold this discussion before the Ninth Circuit and I look forward to moving towards a full trial,” said Lebel.

Juliana v. United States was brought by 21 young plaintiffs, and Earth Guardians, who argue that their constitutional and public trust rights are being violated by the government’s creation of climate danger. The case is one of many related legal actions brought by youth in several states and countries, all supported by Our Children’s Trust, seeking science-based action by governments to stabilize the climate system.