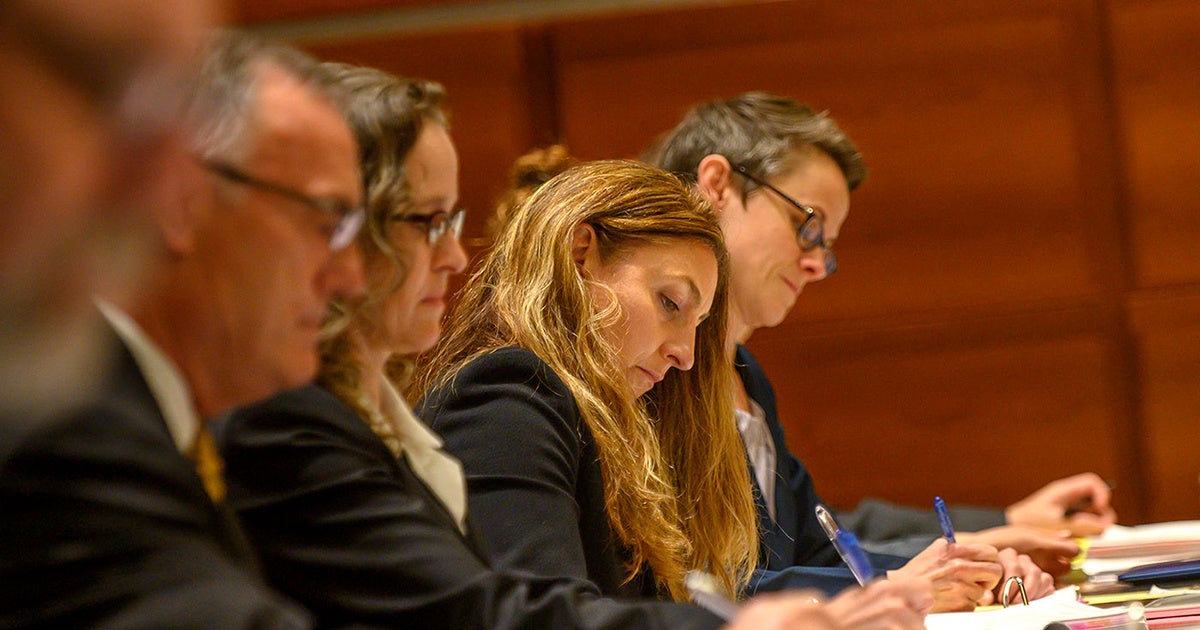 Andrea Rodgers, second from the right, takes notes during a hearing in the Juliana v. U.S. case before the 9th Circuit Court of Appeals in Portland, Oregon on June 4. Colleague Elizabeth Brown sits to her left, while colleague Julia Olson sits on her right, with co-council Philip Gregory on Julia's right. Robin Loznak / Our Children's Trust

On June 4, Andrea Rodgers was in the front row of attorneys sitting before a three-judge panel of the 9th Circuit Court. The court session, held in Portland, Oregon, was to determine whether the climate change lawsuit (Juliana v. United States) brought by 21 young plaintiffs should be dismissed, as requested by the U.S. government, or go on to trial.

It’s the latest of many delays for the lawsuit, which was first filed in 2015 by the then-youth plaintiffs. The judges’ decision on this most recent request to dismiss the case is expected sometime in the next few months.

Rodgers is a senior attorney for Our Children’s Trust, the nonprofit based in Eugene, Oregon, that is supporting the young plaintiffs — the eldest of whom are now young adults while the youngest is 11 — in making their case.

They’re suing the U.S. government for endangering their future by supporting a fossil fuel-based energy system, despite knowledge of how that would contribute to the current climate disaster. Rodgers is also the lead attorney for climate-related suits on behalf of children in the states of Washington and Florida.

I spoke with Rodgers about the lawsuit, the youth movements erupting around the world in response to governments’ inaction on climate change, and about preparing her own children for a future marked by the climate disaster.

This interview has been edited for clarity and length, and Andrea Rodgers reviewed the edits for accuracy.

Fran Korten: In the 9th Circuit hearing on June 4, Judge Andrew Hurwitz remarked that with this suit you are asking the court to break new ground. Are you?

Andrea Rodgers: We are not breaking ground with respect to our claims that the government’s conduct is violating the youth’s constitutional rights to life, liberty, property and equal protection of the law.

Where we’re breaking new legal ground is with respect to a new fundamental right—the right to a stable climate system that sustains human lives and liberties. The scale of the government misconduct in this case is quite unprecedented. Never before has there been this kind of government-created public health disaster at such a large scale.

Korten: This case has been stalled for more than four years by the government’s motions to dismiss. How are the plaintiffs in this case reacting to all this delay?

Rodgers: Many of these kids have been engaged in this litigation for a fifth or more of their lives. They’re ready to get their evidence presented to a court. So it’s frustrating. But they’re also confident that they’re going to get their stories told and that justice will be done. They’re just unfortunately seeing that sometimes justice is not swift.

Korten: What gives them the confidence that they will be heard?

Rodgers: They know that they have constitutional rights. They’ve read the Constitution. They see that they have the right to life and liberty. And they understand the science and how their rights are being infringed upon. Under our system of government, you can go to court to get redress. So they are confident that the courts will appropriately apply the law to protect them.

Korten: How do you see this youth-based lawsuit relating to other youth-led movements like the Sunrise movement, Zero Hour, Extinction Rebellion and the worldwide Friday strikes led by Greta Thunberg in Sweden?

Rodgers: It’s really exciting to see these other youth movements develop. I think a lot of people were inspired by these young plaintiffs who, back in 2010, decided to bring their cases to court. Youth today are so aware of what other youth are doing that these movements build off of one another—the students fighting gun violence and [racism] and so much more. They’re having these conversations about the world that they want to live in and that they believe that they’re entitled to as a matter of law. So it’s exciting to see that. As an adult, you want kids who are active in the democratic process. And this is such an important part of that.

Korten: Do you think the activism among the youth will have any effect on the courts’ decisions in this case? 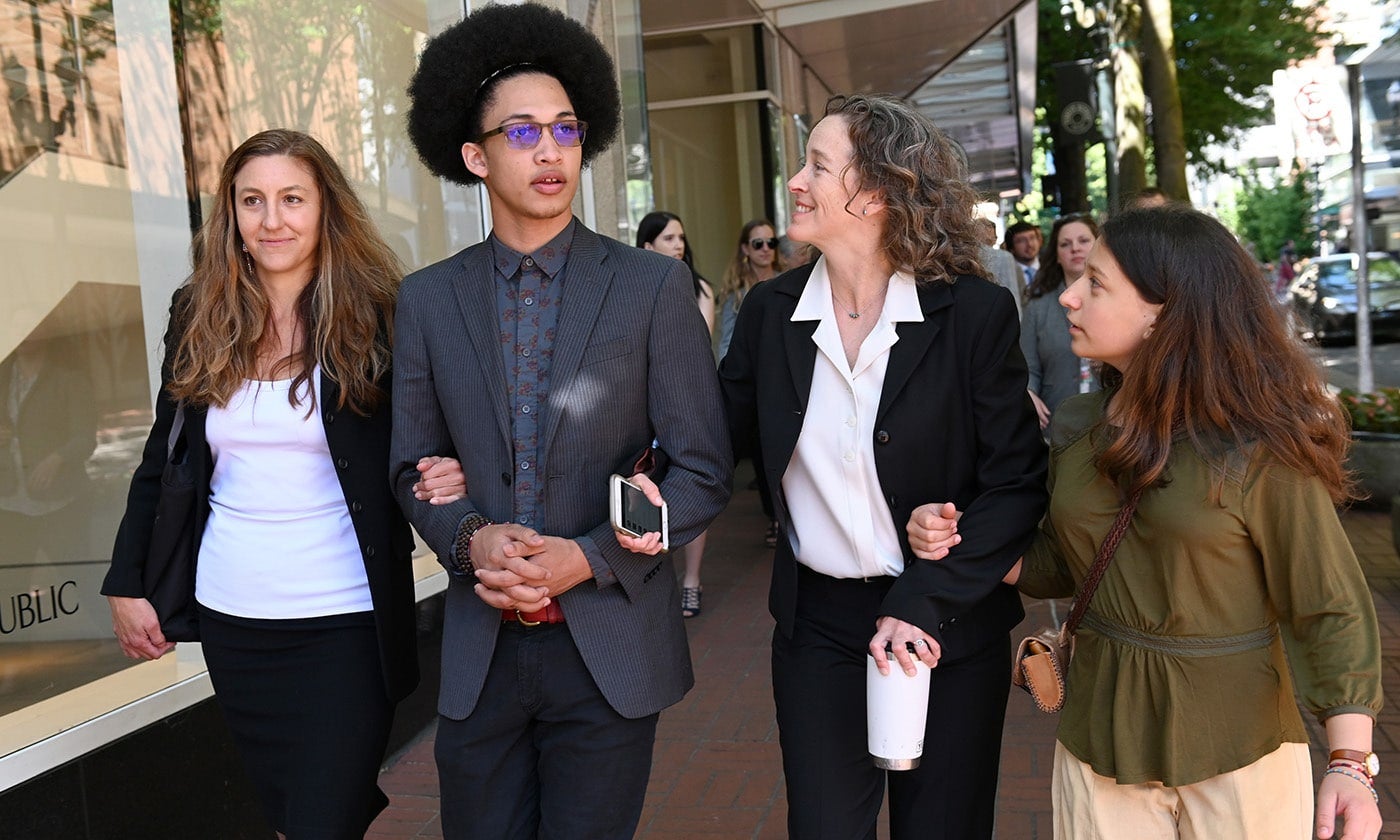 Rodgers: The court doesn’t look to what’s going on outside the courtroom in order to render a legal decision. But the courts are also made up of judges who are human and aware of the world around them. They understand when there is societal change going on. You see that with the gay marriage decision. I don’t think that decision would have happened without the “Love Is Love” and other campaigns. Same thing with Brown v. Board of Education and the bus boycotts. So the movements outside of the courtroom are critical. We have three branches of government, and they all know what the other is doing. But I wouldn’t go so far as to say that the courts are influenced directly. It’s really much more indirect, long term and bigger picture.

Korten: If you do go to trial, you will bring testimony from many experts. But much of that information is already in the news, in academic papers and reviewed in governmental panels. Is there any special value to having it aired in court?

Rodgers: Absolutely. Because in court, it’s sworn testimony under oath. Scientific testimony has to go through a very rigorous process to be admissible in a court of law. Junk science is thrown out or considered unreliable. There are scientific standards for what’s admissible in a court of law. The person delivering testimony has to be considered an expert in the fields in which they’re testifying. There’s no fake news in the court because that’s considered perjury. And then the witness is cross-examined. So it gives the other side an opportunity to poke holes in their testimony and to bring in other conflicting information.

We have 23 expert witnesses. People like James Hansen, Joseph Stiglitz, Frank Ackerman, Harold Wanless, Steve Running, Hugh Goldberg, Pete Erickson and [James Gustave] Speth, all of whom are the top experts in their fields. It’ll be the trial of the century.

Korten: What is the best outcome you could imagine from this suit?

While the courts can order the government to make a plan, they don’t write policies. That’s why things like the Green New Deal and other climate change policies are so critical. We have to have the policies ready because our government is not going to be quick to develop a remedial plan.

Korten: What can ordinary citizens do to support this case? 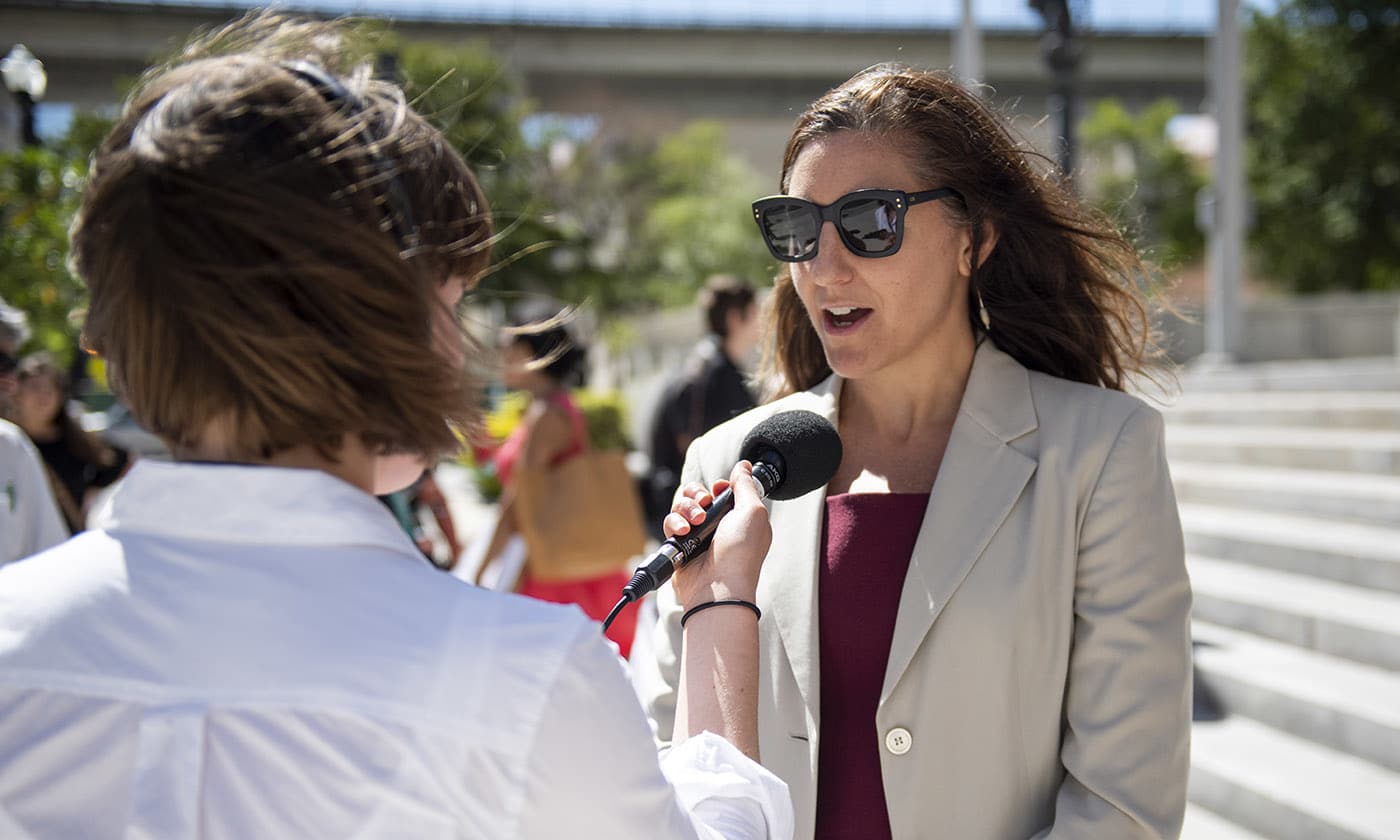 Attorney Andrea Rodgers being interviewed at a press conference on the steps of the Miami Dade County Courthouse in 2018. Rodgers was representing Florida youth in a climate change lawsuit against the state of Florida.

Rodgers: On the Our Children’s Trust website, there are toolkits so that supporters can get engaged and support the youth plaintiffs. You can teach young people about the suit and their constitutional rights in school. There are ways to utilize the litigation to galvanize members of the community in support of science-based climate action. There are people getting congressional and other elected leaders to recognize that there’s a fundamental right to a stable climate system.

Korten: You recently spoke at the Bainbridge Island Climate and Energy Forum in Washington state. How do you see the value of local actions such as that one?

Rodgers: Local action is the primary way that people in the community are learning about climate change. This kind of local forum can keep people aware of policy efforts and making phone calls on legislation or learning about election issues. The other thing a local forum does is to bind us together as a community. Climate change is a very difficult issue. It’s easy to throw up your hands and give up. When you’re working on this issue within a community, that’s so much more powerful. It keeps you going when you feel frustrated or disheartened. You have that community to lean on.

Korten: You are a mother. How do you help your children understandwhat you’re fighting for without scaring them?

Rodgers: It’s really hard. My daughter is 8, and my son 11. You don’t want them to think that there is no future for the planet. But at the same time I want them to recognize the reality of what’s going on and what the scientists say. This is going to be the issue they will work on because it’s going to affect their world in every way imaginable. So they need to be prepared for that.

I try to engender within them a love and appreciation for the natural world and then the understanding that they’re going to need to fight to protect it. It shouldn’t have to be a fight, but it really is. We saw that in court. The government’s lawyer was advocating that there shouldn’t be a right to a stable climate system even though his children and his grandchildren are dependent upon that for their lives. But there he was making those arguments, as scary as that is. So my own children are going to need to know the reality and carry the fight forward.