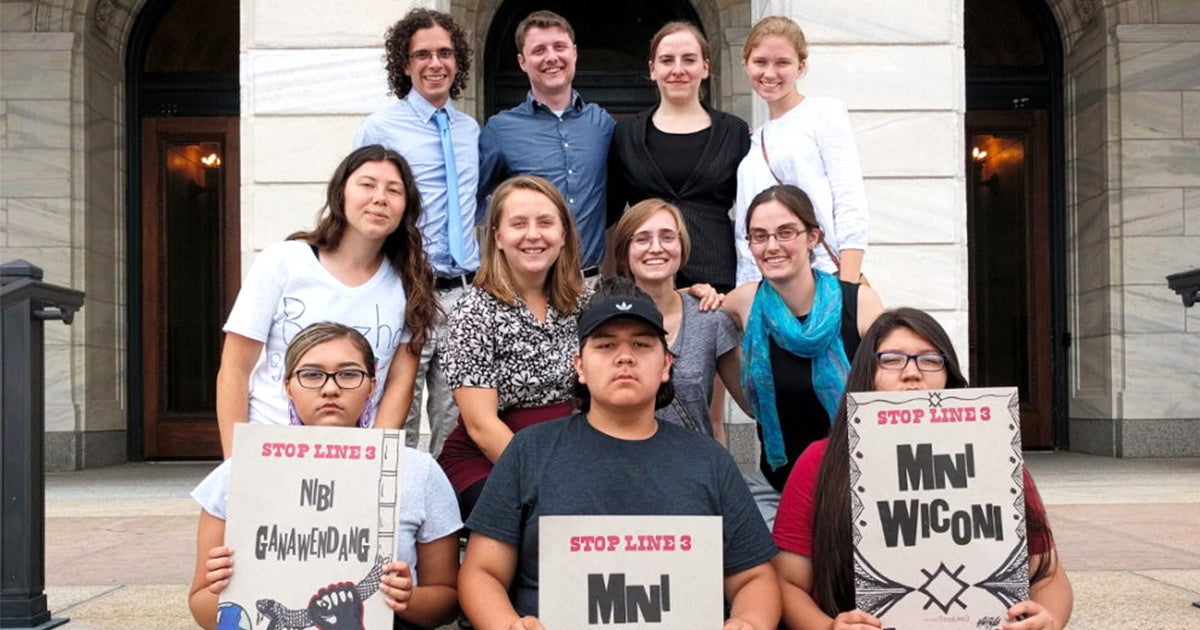 In what is regarded as an unusual step, a group of 13 young people have joined together to become court sanctioned intervenors as they fight a proposed Enbridge Energy pipeline through northern Minnesota.

Intervenors are sanctioned by the state Public Utilities Commission to represent parties in contested cases. They are generally lawyers and experts hired by energy firms, clean energy organizations, environmental groups, governmental agencies and an occasional citizen or two.

It’s rare to see millennials attending a PUC hearing, or even someone not on the payroll of an organization involved in the process. But administrative law judge Ann O’Reilly accepted the argument by Youth Climate Intervenors that their generation will disproportionately feel the burden of climate change.

“In a landmark decision she granted us standing,” said Akilah Sanders-Reed, the 23-year-old who founded the group. “She acknowledged we (young people) had a stake in it and that we deserved a seat at the table. What that means is that the Youth Climate Intervenors have the same rights in that courtroom as Enbridge Energy does.”

A recent ThinkProgress article on millennial climate change activists said the organization is the only youth group nationally ever granted intervenor status in a pipeline case.

The PUC continues to hold hearings across the state to allow supporters and opponents of the Enbridge line to make their case. In St. Paul a few weeks ago, more than 1,000 people showed up at a pipeline hearing, among them members of the Youth Climate Intervenors.

Judge O’Reilly is hearing, reading and collecting testimony which she will then use to make a recommendation to the PUC next year on whether the more than $2 billion project should be built—and if so, what route it should follow.

The Canadian firm Enbridge Energy wants to replace its aging Line 3 pipeline with a newer version that would travel a new route south of the existing path. The new Line 3 would transverse wetlands and wilderness, while delivering 760,000 gallons of oil daily along a 337-mile route in Minnesota from Clearbrook to Superior, Wisconsin. The oil originates from the Alberta tar sands.

As a college student and a young adult, Sanders-Reed was active for a time in the Citizens’ Climate Lobby and serves on MN350.org’s board of directors.

The idea behind Youth Climate Intervenors was to create an organization that could have a place at the PUC table and a more prominent voice in the debate. Sanders-Reed reached out to other young activists, including four from indigenous tribes, and petitioned the PUC to become an intervenor in late May. Although Enbridge objected to allowing the group to have status as intervenors, O’Reilly ruled in their favor in July.

Natalie Cook, an organizer with the Sierra Club‘s Northstar Chapter, said the presence of the youth group “is providing a critical and otherwise unheard voice in the process. Citizens can intervene and it’s not unheard of but I’ve never seen young people intervene in this way before.”

The Youth Climate Intervenors “takes seriously bringing forth views and perspectives that would otherwise not be heard” by regulators, she added.

About half the youth intervenors’ group hasn’t even graduated from high school, and they have no attorney to represent them. Nearly all of them are attending high school or college, she said.

The group sees the pipeline as carrying some of the dirtiest oil in the world—from the Alberta tar sands—and as potentially harmful to Minnesota’s lakes and wetlands if an accident occurs.

In 2010, an Enbridge pipeline that ruptured in Michigan resulted in 843,000 gallons of water being released into a creek that flowed into the Kalamazoo River. The cleanup cost more than $1 billion.

“Tar sands is some of the most carbon intensive oil on earth,” Sanders-Reed said. “This pipeline would lock in billions of dollars of climate damages, which is a price tag my generation will have to pay in the form of public health problems, natural disasters, crop failures and increased cost of living.”

In addition, the proposed pipeline “would run through the headwaters of the Mississippi River and through some of the best wild rice lakes in the world,” she said.

Members of the group have reached out to several experts, among them Oil Change International, NRDC, well-known Twin Cities meteorologist Paul Douglas, professors from local colleges, native American representatives, a health care professional and others.

“The 13 of us worked incredibly hard, everyone worked really hard on this,” she said. “One of the high schoolers was calling up college professors and asking them to help. One of our University of Minnesota students was calling indigenous people from the community that she knows. All these experts have been so thrilled to work with Youth Climate Intervenors and have been so encouraging to us.”

One of those intervenors who made calls to experts is Jada Brown, 20, a University of Minnesota student. She found in the Standing Rock protests a growing movement against big energy projects with what she sees as potentially destructive consequences.

“Being an indigenous woman and Youth Climate Intervenor, it’s a responsibility of mine to speak out and fight for climate justice and protect the land and water, especially for those who are disproportionately affected by it or don’t have a voice,” said Brown in a profile in Power Shift, an climate advocacy website.

Frances Wetherall, a sophomore at Gustavus Adolphus College, was inspired after attending the People’s Climate March in Washington, DC. Her sister knew one of the Youth Climate Intervenors and she signed on to be a member.

Although attending a college more than an hour southwest of St. Paul, Wetherall plans to make time to attend the evidentiary hearings where intervenors can question their own experts and those of pipeline supporters.

She does not want a pipeline of any sort to cross Minnesota. “What I’m hoping for is the tar sands Enbridge is trying to move stay in the ground, which I know is rather ambitious,” she said.

Leili Fatehi, an attorney working for the Sierra Club, calls the intervenors “incredibly brave” for involving themselves in an administrative process that can be “intimidating” to non-experts and those unaccustomed to PUC hearings.

Moreover, the Sierra Club and other intervenors represent a broader mix of ages than the Youth Climate Intervenors, but that is their strength. “These guys, by virtual of the fact they’re young, are bringing forth arguments about what it means for people under 25,” she said.

“After all, they will pick up the majority of the costs for this … It will impact their health care, where can buy property, the cost of insurance—the real wealth impact of climate change.”

In February, the administrative judge is expected to issue a recommendation to the PUC either supporting or denying Enbridge’s certificate of need to build the pipeline and weigh in on the chosen route. The PUC will then make its own decision, likely in April.

Sanders-Reed, a 2106 Macalester graduate in environmental studies, began her career in political activism in her hometown of Albuquerque, New Mexico. Minnesota’s environmental ethos drew her to attend Macalester.

“I came to Minnesota because Minnesota seemed like the kind of place that could be a leader in clean energy and have a future I want to see,” she said. “And I still believe in that. I have so much faith in the people of Minnesota who have stood up to this pipeline and for renewables, and for clean water, time and time again. I hope our elected officials and Judge O’Reilly hear that loud and clear.”

Reposted with permission from our media associate Midwest Energy News.