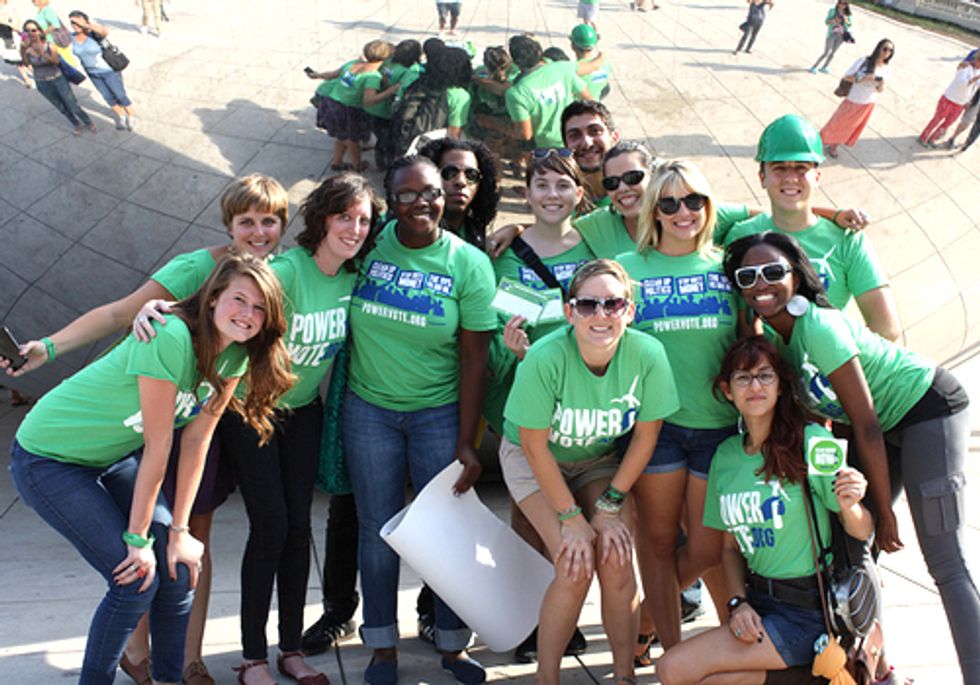 More than 50 youth vote activists with the Energy Action Coalition rallied outside of the Obama for America campaign headquarters in Chicago yesterday, calling on President Obama and Mitt Romney to take action to address climate change and support clean energy. The rally coincided with the release of Mitt Romney’s energy plan, which made no mention of climate change, and launched the Power Vote campaign, which will mobilize hundreds of thousands of young voters to turn out in the elections and call for clean energy and climate action.

“We’re breaking the silence on climate change, and building grassroots support for action so that President Obama, Mitt Romney and other candidates have to answer to young voters on climate change,” said Maura Cowley, executive director of Energy Action Coalition. “Romney’s energy plan, which is nothing more than ridiculous handouts to Big Oil and Big Coal, and makes absolutely no mention of climate change, adds fuel to the fire for young voters to get out there and demand leadership from the candidates.”

Power Vote will support thousands of youth organizers to mobilize hundreds of thousands of young voters for clean energy and climate action, and call on candidates to stop stalling and start leading on climate change. President Obama and Mitt Romney have been silent on climate change. The Power Vote campaign is building grassroots support for climate action and demanding President Obama, Mitt Romney and other candidates break the silence and start taking action.

The 50 youth vote leaders with Energy Action Coalition were gathered in Chicago this week for an intensive grassroots organizing training. The training and rally marked the beginning of the larger Power Vote campaign, which will kick-off on campuses as the fall semester starts, and will include a series of election related events, national days of action and the release of an online organizing tool that allows grassroots supporters to build their own campaigns.

Energy Action Coalition is a coalition of 50 youth-led environmental and social justice groups working together to build the youth clean energy and climate movement. Working with hundreds of campus and youth groups, dozens of youth networks, and hundreds of thousands of young people, Energy Action Coalition and its partners have united a burgeoning movement behind winning local victories and coordinating on state, regional and national levels in the U.S. and Canada.