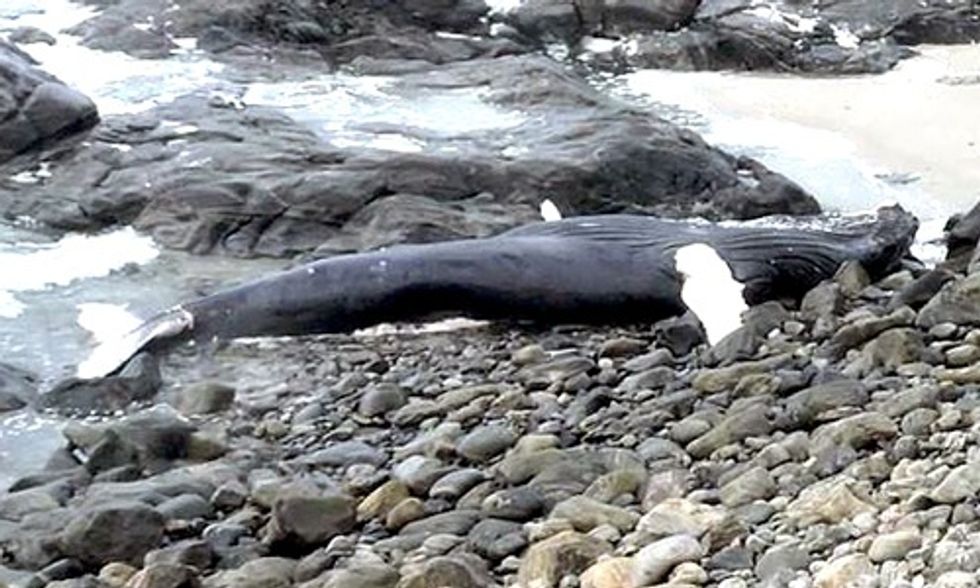 A humpback whale was found dead on the Isle of Barra in Scotland earlier this week. According to the Scottish Marine Animal Strandings Scheme, the juvenile male had lesions on its tail that was likely caused by inadvertent entanglement in fishing gear.

The Hebrides News reported March 2 that the 26-foot-long whale was in a "poor, thin condition" when first discovered by local residents. A spokesman from the Scottish Marine Animal Strandings Scheme told the publication that the cuts on the whale's body were consistent with being accidentally caught in fishing gear which may have indirectly caused its death.

"It's an unfortunate accident as fishermen obviously do not go out intending to catch whales," the spokesperson said, who added that since whales can't swim in reverse, the heavy weight of trailing ropes and fishing creel acts "like a sea anchor so it can't feed properly and loses condition."

The Scottish Marine Animal Strandings Scheme noted on Facebook that the lesions found on the whale's body was "typical of those we see associated with creel lines."

"We have no way of knowing whether it was active or ghost gear that it became entangled in," the post continues. "It is possible it was cut loose from active gear but equally it could of floated loose from ghost gear."

"Ghost gear" includes nets, lines and traps that are lost, abandoned or discarded in our oceans. With an estimated 640,000 tonnes of this material left in our oceans annually, ghost gear can have a devastating and deadly effect on aquatic life.

There have been 21 strandings of humpback whales recorded in the UK since 2001, the Scottish Marine Animal Strandings Scheme noted on Facebook.

"Entanglement is the most commonly recorded cause of death for Minke whales in Scottish waters, and has been observed in several humpback whales and other species as well, including the Killer whale that stranded on Tiree earlier this year," the organization wrote.

"Nevertheless the exact numbers and scale at which entanglement occurs are unknown, making it challenging to quantify the issue and its impact on a population level."

As EcoWatch reported last month, an adult female Orca named Lulu was found dead on the Scottish island of Tiree with deep lesions on her body. After a necropsy was performed, the Scottish Marine Animal Strandings Scheme concluded the whale had been “chronically entangled” in abandoned fishing gear for several days and likely drowned from entanglement.

According to the Sea Shepherd Conservation Society, adult male humpbacks grow up to 40-48 feet and have a life expectancy of 45-50 years. There are an estimated 30,000-40,000 humpbacks on the planet, or about 30-35 percent of the original population.

Although the humpback whale is currently listed as endangered, the National Oceanic and Atmospheric Administration says that protection and restoration efforts over the past 40 years have led to an increase in numbers and growth rates for humpback whales in many areas and has proposed removing most of the species’s population sites off the endangered species list.

TED Talk: ‘It’s Not Too Late for Our Oceans’