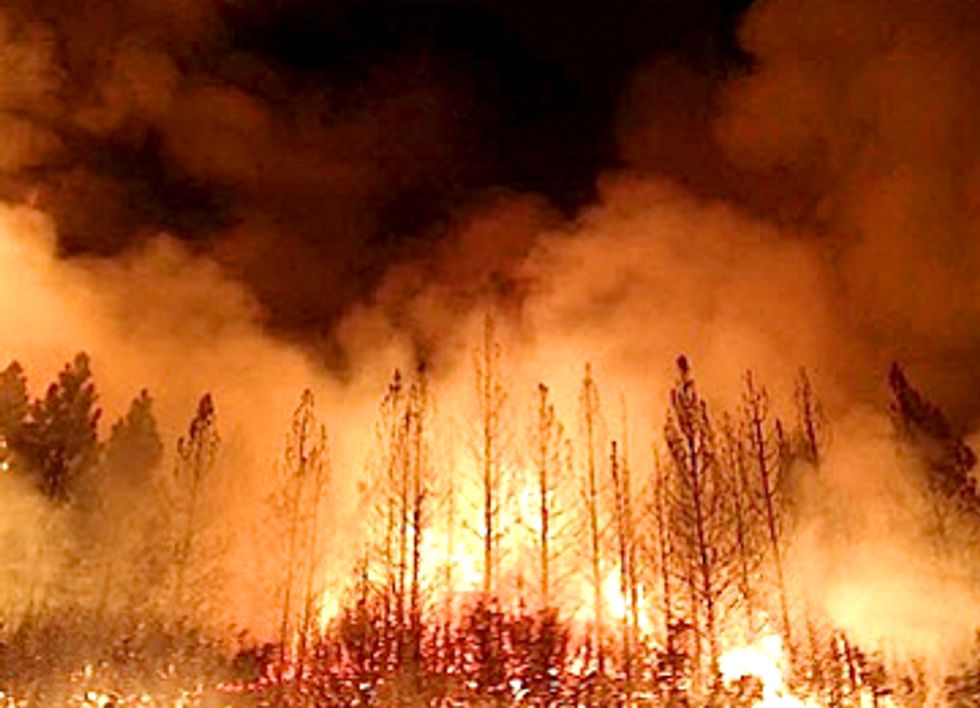 Last night from my neighbor’s deck, I watched the eerie glow of flames from one of the largest wildfires in California history. At my own house the top of the giant pyrocumulus—a cloud created by the intense heat of the fire—looms over the trees today. The airspace above my home has become a regular flyway, with DC10s soaring overhead carrying flame retardant, and helicopters buzzing by with their water filled “bambi buckets.”

Known as the Rim Fire, to date it has burned almost 160,000 acres (roughly the size of Chicago) with about 22,000 of those acres in Yosemite. Not surprisingly, given its immense size and threats to a cherished national park, the fire has prompted a media blitz, headlining everywhere from CNN to the BBC to Al Jazeera.

Yet almost universally missing from the media coverage, as usual? That climate change is making wildfires more frequent and more intense. As they have in past years, reporters won’t connect the dots in their main stories, treating the science that’s staring us in the face as a side story.

My neighbors and I lamented over this glaring omission last night as we viewed the smoke and flames that had become an all too familiar sight on our local landscape. We are living on the front lines of a new reality partially shaped by climate change. This is the fourth large fire in the Southern Yosemite area that we have faced this summer. In July, the Carsten’s Fire burned a mere mile from my house and we breathed smoke from the Aspen Fire daily for three weeks (although at least we could enjoy the amazing sunsets the fire produced while coughing). My home has been regularly filled with fire refugees this past week and many close friends are currently displaced, waiting to see if their houses have been destroyed.

And it’s only August, far from the end of fire season in California.

Scientists have long predicted that both the intensity and duration of fires would be increased by climate change. And in California and the West, this certainly is playing out. So why the media silence?

I spoke to Jan van Wagtendonk, research forester, emeritus with the U.S. Geological Survey and area resident. He has done landmark research on fire ecology in his more than forty years of working in Yosemite and is the co-editor of the book Fire in California’s Ecosystems.

“There is no doubt in my mind that climate change is contributing to the intensity of these fires with the drought and the dryness," he said. "Even though we have cyclical droughts and climate changes naturally, we are out of balance.”

Just to be clear, fire isn’t inherently bad and serves as a vital part of a forest ecosystem. But as van Wagtendonk observes, climate change disturbs the equilibrium of fire ecology.

“Once a fire has burned, the ecosystem doesn’t set back to a normal cycle like in the past," Wagtendonk explains. "Instead a whole new ecology or different habitat than what the animals are used to gets created. The system is seeking a new equilibrium, and that means everything we have become accustomed to changes.”

Across the American West, there’s growing evidence these increasingly intense wildfires are permanently changing landscapes already being altered by global warming. And wildlife is certainly impacted by these changes.

“Generally for a more intense fire, animals cannot adjust to the habitat changes, which affects everything from mosquitoes to bighorn sheep,” said van Wagtendonk.

Steve Thompson, Yosemite’s chief of wildlife management, noted that fire can be both beneficial and detrimental to wildlife, depending on the intensity of the fire. “What we see here in Yosemite is fire returning to the ecosystem, but if it uniformly burns too hot or too intensely it can destroy suitable habitat.”

Other factors, like historic fire suppression practices exacerbate the problem and can combine with climate change influences to create a perfect “firestorm” scenario. Challenges to wildlife are not just limited to California as National Wildlife Magazine’s current issue features the article, Wildlife Feels the Heat, about how fires and other climate change related phenomena threaten animals nationwide.

A great gray owl and fledgling in a forest in Yosemite. Photo credit: Joe Medley

According to Thompson, some wildlife that might be impacted in Yosemite includes the already threatened mountain yellow-legged frog, and the rare and endangered Yosemite great gray owl. The fire could alter water quality from sedimentation and run-off for the frog, and also destroy nesting areas for the owl. For other wildlife, mobility is a key defense strategy and unless the fire is moving too fast, the animals may be able to outrun it.

One of Yosemite’s iconic tree species, however, cannot outrun the blaze. Two giant sequoias groves, the Tuolumne and the Merced, are in the fire’s proximity. Giant sequoias are adapted to fire, but park officials are concerned enough to set sprinklers around them. Tom Medema, Yosemite’s chief of interpretation told USA Today, “It’s really unthinkable to lose sequoias that have survived fire for 2,000 to 3,000 years.”

These magnificent and hardy trees actually need fire to reproduce and have an unusually thick bark that provides a protective insulation. But parts of the Rim Fire are burning hotter and higher than usual, and if this type of “crown fire” reaches the groves, it could be more than the trees could withstand.

The human impact of fire in my area has also been devastating. Twenty-three structures have already burned, and thousands more are threatened. The Berkeley Family Camp, which has been in operation since 1922, burned almost to the ground.  The gateway town of Groveland will lose significant tourist revenues over one of the busiest holiday weekends of the year, and the fire forced the cancellation of the popular Strawberry Music Festival. The fire also threatens water and power sources for San Francisco. Yosemite Valley—the crown jewel of the crown jewel park—does not face imminent danger and remains open and accessible except through the Highway 120 west entrance.

The most significant human impact, however, is the almost 4,000 firefighters that are risking their lives to try to contain the blaze. Dick Fleishman of the U.S. Forest Service calls the Rim Fire the “highest priority in the nation” and has allocated significant resources to protecting Yosemite and the surrounding communities.

Yet we are running out of these resources. The national fire preparedness level has been raised to a level five—its highest point—meaning we might not have enough firefighters to protect us. Additionally, funding is an issue. Along with the challenge of sequester cuts, the U.S. Forest Service had to recently place a freeze on other funds in order to cover the increasing fire-related expenses, even though it already allocates half of its budget for firefighting.

Given all these factors, why are we not using this fire that has captured the nation’s attention as an example of the devastating results of climate change?

“We have a problem and we are out of time—failing to connect the dots is irresponsible for it downplays the urgency of the tragedies, such as extreme wildfires, that we are witnessing in Yosemite and other regions in the west,” said Felice Stadler of NWF.

I know wildfire is a crucial part of forest ecology and the threat of fire a normal part of life when you live in the mountains. But these extreme fires are not part of Mother Nature’s deal, and a superfire burning in my beloved Yosemite National Park seems to up the ante beyond the natural balance.

Yosemite is my favorite place on earth. I live on its southern border, worked in the park for almost a decade and spend most of my free time wandering in its sublime backcountry. It bothers me (actually, it infuriates me) knowing that an extreme fire—partially fueled by human caused climate change—may have a great impact on my home and a place I cherish.

I don’t want firefighters to risk their lives, or constant smoke and flames to become the new summer tradition in California, or a 2,000 year-old stand of ancient trees to burn because we couldn’t end our dependence on fossil fuels.

Do any of us want that on our conscience? We didn’t start the fire, but we have certainly added fuel to it through our refusal to address climate change. How much of Yosemite will we let burn before we act?