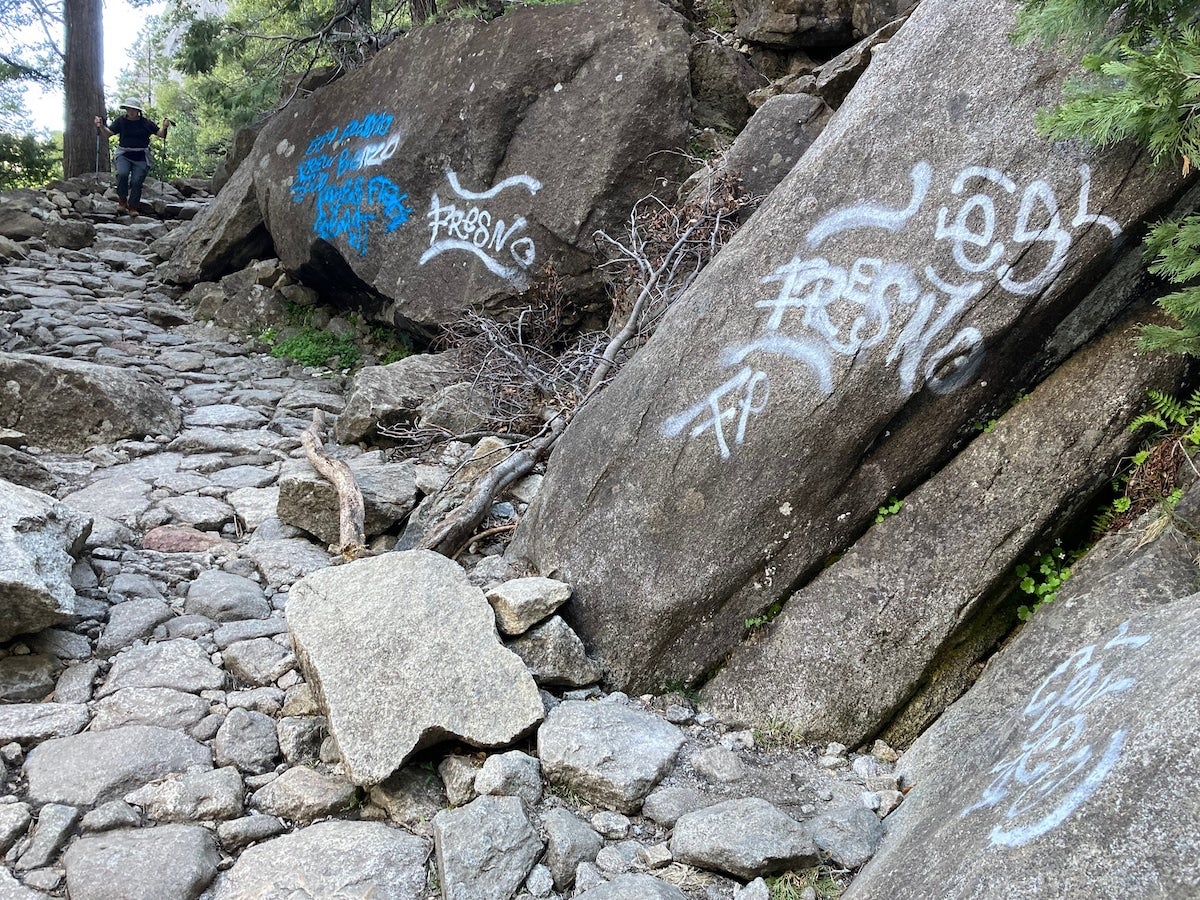 Spray painted rocks on the trail to the top of Yosemite Falls. Yosemite National Park / Facebook

The National Park Service is calling on the public to help track down the culprits who used spray paint to vandalize sites throughout Yosemite National Park last month. Spray paint was found on rocks and other sites along a popular trail in the park.

NPS rangers began receiving calls about the vandalism on May 20, 2022 around 8:15 p.m., so they blocked the Yosemite Falls Trail. Surveying the extent of the damage the next day, the rangers found more than 30 sites spray painted with white and blue paint. The graffiti includes symbols and words, including the word “Fresno.” The graffiti spans from markings about 1 square foot to over 8 square feet, with most of the tags being around 3 square feet in size.

“For someone to take a beautiful area and do this, it’s beyond upsetting,” Scott Gediman, Yosemite National Park spokesperson, told SFGATE. “It’s beyond egregious.”

In a June 12 Facebook post to the Yosemite National Park page, rangers shared photos of some of the damage and called on the public to help identify the vandals, although Gediman has noted the team does have some leads.

“If you were on the trail to the top of Yosemite Falls between 6 pm and 11 pm on May 20, 2022, and saw individuals carrying cans of spray paint, engaging in tagging, or have video or photographic evidence, please let us know by visiting go.nps.gov/SubmitATip. You can also email nps_isb@nps.gov or call or text 888-653-0009,” the park rangers stated.

Rangers are hopeful they will find those responsible for the graffiti, especially with so many visitors having phones and cameras on hand during their trips to the parks.

This is not the first time extensive graffiti damage has been done to a national park. In December 2021, people carved their names into prehistoric rocks in Big Bend National Park in Texas and caused permanent damage.

“With each instance of vandalism, part of our nation’s heritage is lost forever,” said Bob Krumenaker, superintendent of Big Bend National Park, as reported by CNN.

In April 2022, the Zion National Park team released a video about rising instances of vandalism and asked visitors to embrace the “Leave No Trace” principle. Rangers had to investigate vandalism around Joshua Tree National Park in 2022.

After seeing photos of graffiti in California’s Death Valley National Park in 2020, a Canadian resident confessed to vandalizing the park with his name, Steve, and the name of a companion, Lacy, who turned out to be a dog. The man apologized and confessed, and according to an NPS statement, charges were not filed against the vandal as of April 2020, but penalties may include fines or restitution charges.

The last time Yosemite saw damage of this extent was in 2010, when tents, cabins and trees were graffitied. Park rangers caught and prosecuted the vandals of that incident.