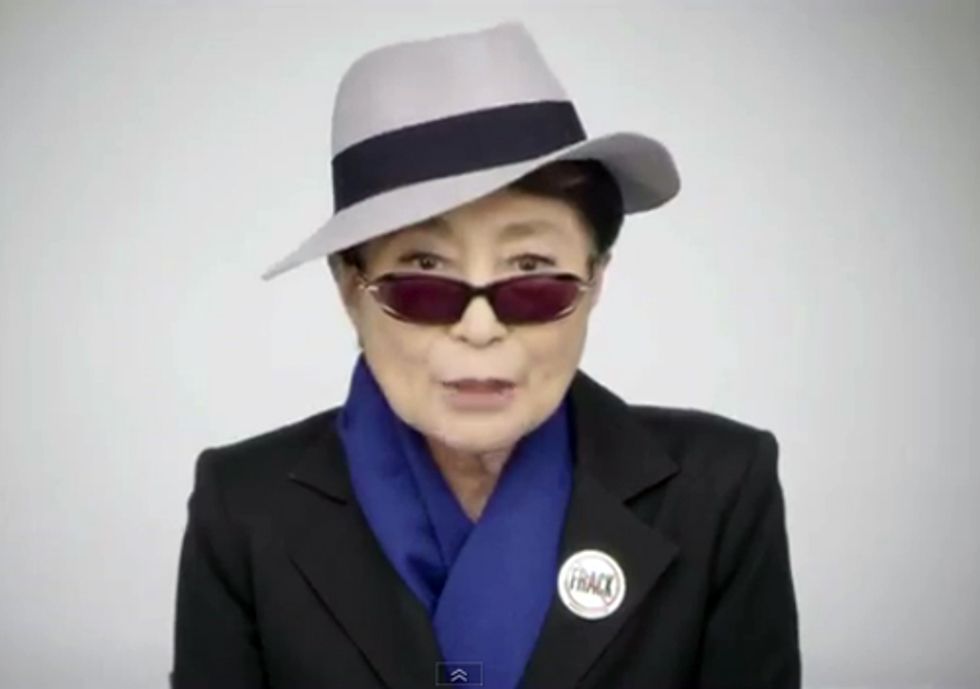 As the deadline for New York Gov. Andrew Cuomo’s decision on gas fracking approaches later this month, Artists Against Fracking has stepped up its campaign calling for a permanent moratorium on fracking.

Today, a 30-second TV ad will begin airing in New York City, Westchester and Albany featuring Artists Against Fracking co-founder Yoko Ono addressing the Governor: “Gov. Cuomo, since you haven't met with me about the dangers of fracking, I will show you now on TV,” Yoko says in the spot.

Visuals of fracking then run interspersed with the headlines: Tap water too toxic to drink or bathe in; 60 percent of wells leak over time: And they’re much too deep to fix. Keep our water safe. Keep fracking out of New York.”

Yoko then comes back on camera to close with “P.S. Nice to meet you, Governor.” John Lennon's song “Gimme Some Truth” is the soundtrack of the ad.

Yoko Ono and Sean Lennon have repeatedly asked to meet with the Governor, along with experts on fracking including Dr. Anthony Ingraffea of Cornell University. They have also praised the Governor for his recent actions on clean energy and gun control.

The ad will air in New York on Friday through next week, when Cuomo could make his decision.

“After visiting with families in Pennsylvania whose water, homes and lives have been hurt by the gas industry, I wanted to show Gov. Cuomo and the public what I saw. He must know what could happen to New Yorkers—our air, our water, our climate—if he allows fracking,” Ono said. “We hope Cuomo makes New York the clean energy state, not the dirty fracking state,” added Artists Against Fracking co-founder Sean Ono Lennon.

In addition to Ono’s ad, Artists Against Fracking will purchase television time to air the winning TV ad submission from the group's #DontFrackNY video contest. Nearly 100 videos were submitted to the contest in two categories: short videos and TV-ready ads. Ono and her son, Sean Lennon, reviewed submissions, and together selected one winner from each category.

Michael Lebron’s winning 30-second TV ad will air in the New York City and Albany media markets next week. Mariah Prentiss, staff advisor of New York Youth Against Fracking, submitted the winning short video, which will be featured on Artists Against Fracking website and distributed online to millions by activist groups and social media channels. All winning and runner-up videos from the contest can be viewed here.

Artists Against Fracking also just released Director Josh Fox’s mini-doc about the group’s recent bus tour to Pennsylvania fracking sites. Fox is the creator of the anti-fracking documentary “Gasland,” which was nominated for an Academy Award in 2011. In the video, Yoko and Sean also directly address the Governor.

Gov. Cuomo could make his decision on whether or not to allow fracking for natural gas in New York as early as Feb. 13, but no later than Feb. 27.