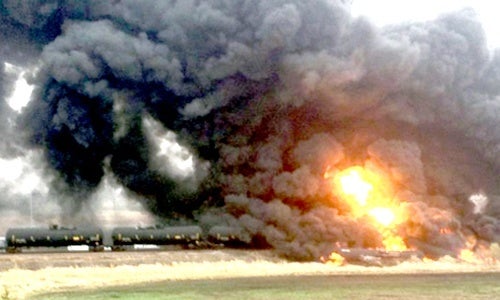 The town of Heimdal, North Dakota was evacuated this morning after yet another train carrying crude oil derailed and exploded. A BNSF Railway oil train derailed around 7:30 a.m., setting at least 10 oil tanker cars on fire. No injuries or fatalities have been reported.

“The tank cars involved in the incident are the unjacketed CPC-1232 models,” BNSF spokesperson Amy McBeth told Valley News Live. These newer tank cars are suppose to be safer than older models, but the four oil train accidents in the first three months of 2015 all involved the newer cars, according to Common Dreams.

“Again another derailment and explosion of a train carrying crude. Again another community evacuated and its people counting their blessings this didn’t happen half a mile down the track in the middle of town,” said Earthjustice attorney Kristen Boyles. “Under the U.S. Department of Transportation’s (DOT) new rules, the type of oil tank cars that are burning in Heimdal will stay on the rails for five to eight years. DOT’s new industry-pleasing rule is too weak and too slow. We need to get these exploding death trains off the tracks now.”

Last week, the DOT released new oil-by-train safety standards, but many environmental groups believe the standards are not strong enough and “leave communities at risk of catastrophe.” The Center for Biological Diversity is one of the groups calling for a moratorium on these so-called “bomb trains.”

“We will continue to see these fiery derailments even with the new regulations in place, because they fail to take sufficient actions to prevent oil trains wrecks,” said Jared Margolis, an attorney for the Center for Biological Diversity. “As this accident demonstrates, people, wildlife, rivers and lakes will continue to pay the price for the government’s failure to take steps to adequately protect us from these dangerous oil trains.”

Oil train derailments have become more and more frequent in recent years across North America, as oil shipments via rail have increased.

Map shows when and where U.S. oil train accidents have been increasing: http://t.co/mJdCam2InK

“How many of these fiery derailments will we see before the government takes real, immediate action to protect the public and the environment?,” Larissa Liebmann, staff attorney at Waterkeeper Alliance said. “The rule finalized by the DOT clearly caters to the oil industry by creating a watered-down, drawn-out process for implementing even the most minimal of safety measures. Until oil companies can demonstrate a means of transporting their products without the risk of blowing up towns and degrading miles of waterways, they should not be allowed to continue.”