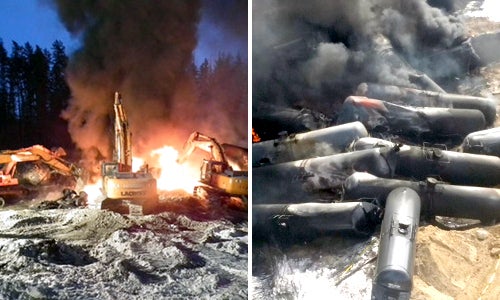 Once again this weekend, we saw scenes of tanker cars strewn across the landscape on their sides emitting huge billows of smoke and fire. On Saturday a 94-car train carrying Alberta tar sands oil derailed two miles outside Gogama, Ontario, with at least 35 cars going off the rails and at least seven igniting. Five cars landed in the Makami River, prompting a warning to residents not to drink the water as well as to stay inside to avoid possible toxic effects from the fire. 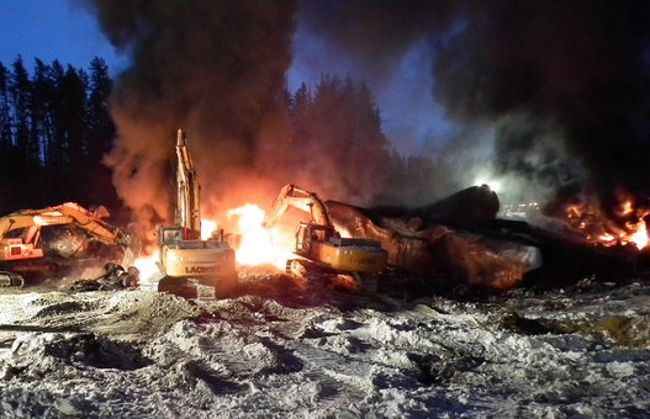 It follows fiery derailments of the so-called oil bomb trains carrying volatile crude oil that have occurred in Illinois, West Virginia and Ontario since the beginning of the year. In each of those cases, only about half a dozen cars derailed, making the Gogama derailment the biggest so far this year.

Gogama is about 60 miles north of the remote, unpopulated area outside Timmins, Ontario where a derailment occurred Feb. 14. And while Gogama itself is remote, it’s not unpopulated: the town has almost 400 residents and the nearby Mattagami First Nation community, and it’s a major center of outdoor tourism. The tracks the train was traveling go through the town, raising the specter of another tragedy like the one that killed 47 people and leveled much of the town of Lac-Mégantic, Quebec in July 2013.

“It’s frightening and nerve-wracking, especially after what happened in Quebec,” Roxanne Veronneau, owner of the Gogama Village Inn, told the Toronto Star. “People here are on pins and needles. The tracks run right through town. I’m sure that there’s going to be a lot of talk afterward that this shouldn’t be in the middle of our town.”

Mattagami chief Walter Naveau told northern Ontario news outlet Village Media that he had met with representatives from CN, the company whose train derailed and wasn’t comfortable with their reassurances.

“They’re saying it’s okay, and yet why are some of my band members feeling it in their chests and tasting it in their mouths?” said Naveau. “I’m very angry at CN right now, to put it mildly.”

He said he was concerned about the potential impact of oil spilling into the river. “The water is coming our way and that’s going to harm our fish habitat and tourist habitat,” he said.

“Anywhere you’re going to see a major spill of oil and chemicals onto the ground you’re going to see permanent contamination of the ecosystem nearby,” Adam Scott, climate and energy program manager for Canadian nonprofit advocacy group Environmental Defence, told Canada’s National Post. “They almost never are able to clean up all of the oil released in a spill like this and it’s much worse even when there’s a direct spill into a river because the oil gets moved down the river and the chemicals can spread.”

Each derailment suggests we’re a little closer to another Lac-Mégantic—or worse.

A recent study from the Center for Biological Diversity called Runaway Risks found that, with the 40-fold increase in rail cars carrying oil since 2008, 25 million people now live within a mile of tracks carrying these dangerous trains.

“Before one more derailment, fire, oil spill and one more life lost, we need a moratorium on oil trains and we need it now,” said Center for Biological Diversity senior scientist Mollie Matteson. “The oil and railroad industries are playing Russian roulette with people’s lives and our environment, and the Obama administration needs to put a stop to it. Today we have another oil train wreck in Canada, while the derailed oil train in Illinois is still smoldering. Where’s it going to happen next? Chicago? Seattle? The Obama administration has the power to put an end to this madness and it needs to act now because quite literally, people’s lives are on the line.”

While both Transport Canada and the U.S. Environmental Protection Agency (EPA) have proposed new safety regulations for oil trains, including phasing out the old puncture-prone DOT-111 oil tankers, many of the recent derailment fires, including the one in Gogama, involved the new and supposedly safer CPC 1232 cars. And the industry is lobbying for a longer time frame in which to phase out the old cars.

The federal government, responsible for rail safety, must do more to protect our communities and the environment pic.twitter.com/XE2dgTn9go — Glenn Thibeault (@GlennThibeault) March 8, 2015

“The cars involved in this incident are new models, compliant with the latest federal regulations, yet they still failed to prevent this incident,” said Glenn Thibeault, who represents the Gogama area in the Ontario legislature.

“It’s basically guaranteed to happen again; this is not an isolated incident,” Scott told The Star. “So until something dramatic is done, we’re going to see this continuing over and over again.”